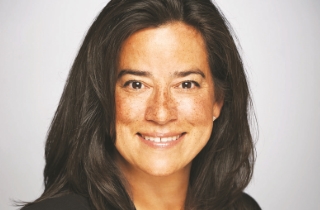 Wilson-Raybould quits cabinet, hires ex-SCC judge to advise on what she can ‘legally’ say about SNC-Lavalin

Ex-Attorney General of Canada and former Justice Minister Jody Wilson-Raybould has quit the federal cabinet, saying she has hired former Supreme Court of Canada Justice Thomas Cromwell to advise her on what she “is legally permitted to discuss” publicly about The Globe and Mail’s allegation that officials in the Prime Minister’s Office exerted “heavy pressure” on her to press the Public Prosecution Service of Canada to abandon its criminal bribery prosecution of SNC-Lavalin in favour of a deferred prosecution agreement that would not trigger criminal consequences for the Montreal-based global engineering and construction giant.

Wilson-Raybould tweeted out Feb. 12 her resignation as minister of Veterans Affairs and Associate Minister of National Defence, the less senior post Prime Minister Justin Trudeau demoted her to in January from her heavyweight Cabinet role as Minister of Justice and Attorney General of Canada.

“I am aware that many Canadians wish for me to speak on matters that have been in the media,” Wilson-Raybould wrote in her February 12 letter to the Prime Minister. “I am in the process of obtaining advice on the topics that I am legally permitted to discuss in this matter and as such have retained the Honourable Thomas Albert Cromwell CC as counsel.”

In a hastily called news conference at end of day in Winnipeg, Trudeau told reporters he was “puzzled” by her resignation — which he had accepted the night before. “Frankly I’m both surprised and disappointed by her decision to step down,” he said. “This resignation is not consistent with conversations I had with Jody a few weeks ago when I asked her to serve as Canada’s minister for Veterans Affairs and associate minister of National Defence, nor is it consistent with the conversations we’ve had lately [over the past couple of days]. In regard to the matter of SNC-Lavalin, ... the government of Canada did its job properly and according to all the rules. ... And if anyone felt that that was not the case, particularly the attorney general, it was her responsibility to let me know about that. Of course she said nothing of that to me last fall” when the Public Prosecution Service of Canada (PPSC) decided to proceed with SNC Lavalin’s criminal prosecution, rather than offer a remedation agreement.

Asked why the prime minister had not waived solicitor-client privilege in order to enable Wilson-Raybould to address the matter publicly, Trudeau explained that his officials had warned him about the unintended consequences that waiving privilege could have on cases. “Indeed I’ve heard those calls [for waiver], and that’s why I’ve asked our current minister of Justice and attorney general to make recommendations to me on the question of solicitor-client privilege,” Trudeau said.

“I will highlight however there is a real danger ... of unintended consequences, particularly because there are two court cases ongoing directly related to this matter that could be impacted by such a decision we might make.” (The unrelated prosecutions of both SNC Lavalin and Vice-Admiral Mark Norman are both ongoing.)

In her letter Wilson-Raybould expressed her thanks “to all Canadians” stating that “we must stand together for the values that Canada is built on and which are the foundation for our future.”

She also stated that “when I sought federal elected office, it was with the goal of implementing a positive and progressive vision of change on behalf of all Canadians and a different way of doing politics. My resignation as a minister of the Crown in no way changes my commitment to seeing that fundamental change achieved. This work must and will carry on.”

Wilson-Raybould has said she will remain as MP for Vancouver-Granville.

On Feb. 7, 2019, The Globe and Mail published a story, citing unnamed sources, who alleged that officials in the Prime Minister’s Office “attempted to press” Wilson-Raybould when she was Justice minister and attorney general to intervene in the corruption prosecution of the Montreal-based engineering and construction company which employs thousands of Canadians. Unnamed government officials were alleged to have “urged” Wilson-Raybould, in her role as attorney general, to “press” the PPSC to abandon its criminal prosecution of the company in relation to millions of dollars of alleged bribes paid in Libya and instead proceed with remediation or deferred prosecution agreement — a route the Director of Public Prosecutions (DPP) had declined to offer the company which has been embroiled in corruption cases in several jurisdictions over the years (the Federal Court is presently judicially reviewing the DPP’s decision).

The Globe reported that Wilson-Raybould refused to ask the DPP to offer remediation — a process by which a company can admit wrongdoing, relinquish the resulting benefits, pay a financial penalty and instigate future compliance measures, but avoid criminal conviction and its attendant consequences, such as being barred from federal contracts for 10 years.

According to the PPSC’s website, except in respect of Canada Elections Act matters, the attorney general of Canada “can issue a directive to the DPP about a prosecution or even assume conduct of a prosecution, but must do so in writing and a notice must be published in the Canada Gazette.”

The prime minister and his government have repeatedly stated that “the Prime Minister’s Office did not direct the attorney general to draw any conclusions on this matter.”

Conservative leader Andrew Scheer released a letter he wrote Feb. 12 to the prime minister calling on the government to preserve (i.e. not alter or destroy) “all documents relating to the ongoing SNC-Lavalin Affair” such as “memos, letters, e-mails, pins, SMS messages and handwritten notes” — including those of Wilson-Raybould, her chief of staff Jessica Prince, Wilson-Raybould’s successor as Attorney General, David Lametti, and the prime minister’s top advisers, Katie Telford and Gerald Butts, as well Quebec adviser Mathieu Bouchard, and senior policy adviser Elder Marques.

“With Ms. Wilson-Raybould’s resignation from cabinet, and a cabinet shuffle imminent, it’s absolutely imperative that Mr. Trudeau ensure the preservation of these records,” Scheer said in a statement. “Canadians deserve to know the truth around what happened and these records must be preserved.”

He told reporters the same day “I call on Justin Trudeau, in the strongest possible terms, to waive any solicitor-client privilege he believes he may have in this case so that Ms. Wilson-Raybould can speak. ... Canadians have the right to know the truth on this and for days now the prime minister’s message has changed, and he’s been absolutely trying to keep something hidden.”

Scheer repeated his call for the Liberal-dominated Commons Justice Committee to vote at an emergency meeting slated for Feb. 13 to launch an investigation and bring before the committee the same people, as well as the prime minister and Clerk of the Privy Council Michael Wernick, to testify on the SNC-Lavalin matter.

Justice Committee chair Anthony Housefather, who told media he believes the prime minister’s statements that the Liberal government has followed all the rules and that the allegation in the Globe story is false, said he was personally inclined to support an investigation by the justice committee to clear up matters for the public, although the list of witnesses and its terms of reference would have to be worked out jointly by the committee’s members.

Asked why the prime minister hasn’t waived solicitor-client privilege with respect to the Globe’s allegations that Wilson-Raybould was pressured in her role as attorney general, Lametti told reporters in a scrum at the Canadian Bar Association’s annual meeting Feb. 11: “I’m attorney general for Canada, and therefore the government’s lawyer, and it would be very inappropriate for me to give any comment on that. Solicitor-client privilege is an important part of the Canadian legal system, and I am the attorney for the government, so I can’t comment on it.”

Lametti also declined to comment on whether a deferred prosecution agreement for SNC-Lavalin is a possibility — citing the fact that the case is currently before the Federal Court.

When she was shuffled out of the minister of Justice and attorney general post Jan. 14, Wilson-Raybould raised eyebrows in Ottawa when she not only issued a lengthy statement highlighting her achievements, but commented rather cryptically “the minister of Justice and attorney general of Canada is somewhat distinct from other cabinet ministers because the role is a dual one. The minister of Justice is the legal adviser to cabinet. In this capacity, the minister is concerned with the administration of justice, including policy in the areas of criminal law, family law, human rights law and Indigenous justice. The role of the attorney general of Canada carries with it unique responsibilities to uphold the rule of law and the administration of justice, and as such demands a measure of principled independence. It is a pillar of our democracy that our system of justice be free from even the perception of political interference and uphold the highest levels of public confidence. As such, it has always been my view that the attorney general of Canada must be nonpartisan, more transparent in the principles that are the basis of decisions, and, in this respect, always willing to speak truth to power. This is how I served throughout my tenure in that role. At a time when the functioning of democracies around the globe is increasingly under strain, and democratic norms are in peril, the unique and independent aspects of the dual role of the minister of Justice and attorney general of Canada are even more important. I know Canadians across the country expect such high standards to continue to be met — especially in the uncertain times in which we now live — and I expect this to continue.”