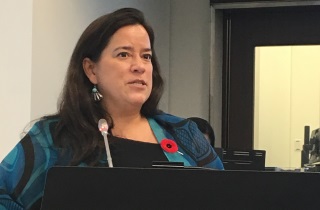 Some legal experts dispute the assertion that solicitor-client privilege bars Jody Wilson-Raybould from making any comment on The Globe and Mail’s explosive but unproven allegation that the Prime Minister’s Office (PMO) “pressed” the then-attorney general last fall to nix the bribery prosecution of SNC-Lavalin in favour of a remediation agreement enabling the Montreal-based construction giant to remain eligible for lucrative federal government contracts.

Wilson-Raybould, a Vancouver Liberal MP and former federal minister of Justice and attorney general of Canada, stunned Canadians when she recently quit as minister of Veterans Affairs and associate minister of National Defence, a role she assumed in a federal cabinet shuffle Jan. 14.

In a terse Feb. 12 letter which did not offer an explanation for her abrupt departure, Wilson Raybould told Prime Minister Justin Trudeau she resigned with “a heavy heart,” knowing “that many Canadians wish for me to speak on matters that have been in the media.” She said she has retained former Supreme Court Justice Thomas Cromwell of Borden, Ladner Gervais to advise her “on the topics that I am legally permitted to discuss in this matter.”

Wilson-Raybould has asserted that solicitor-client privilege gags her from speaking about the Globe’s anonymously sourced Feb. 7 story alleging that the unnamed PMO officials unsuccessfully “urged” her last fall to “press” the Director of Public Prosecutions (DPP) and the office of the Public Prosecution Service of Canada to abandon criminal bribery proceedings against SNC-Lavalin and offer the company a remediation deal instead. (The Director of Public Prosecutions Act (s. 10(1)) stipulates that any directive that the attorney general issues to the DPP with respect to the initiation or conduct of any specific prosecution must be in writing and be published in the Canada Gazette. )

Several legal experts contacted for comment by The Lawyer’s Daily emphasized they had no knowledge of what actually happened in the SNC-Lavalin case. But they challenged the notion that solicitor-client privilege would apply to completely bar an attorney general from speaking to a media allegation that the PMO “pressured” him or her to halt a criminal prosecution in favour of a deferred prosecution agreement.

In particular, they raised doubts that a solicitor-client relationship would exist in the circumstances alleged, and that the nature of the alleged communication(s) could be covered by solicitor-client privilege.

Gavin MacKenzie of Toronto’s MacKenzie Barristers, a former Law Society of Ontario head and a leading authority on legal ethics and professional responsibility and liability, told The Lawyer’s Daily solicitor-client privilege would not attach to communications that are intended not to obtain legal advice, but to influence an attorney general to direct the DPP to enter into a remediation agreement, rather than seek a conviction against a party accused of a crime.

“As the chief law officer of the Crown, the attorney general is the government’s lawyer,” he remarked. “To the extent she was asked for legal advice, both what was communicated to her by agents of the government, and the advice she provided are privileged.”

“It doesn’t follow, however,” he stipulated, “that everything communicated by the PMO and the attorney general is protected by privilege. The communications must be made for the purpose of obtaining legal advice. Communications intended not to obtain legal advice, but to influence the attorney general to direct the Director of Public Prosecutions to enter into a remediation agreement rather than seek a conviction against a party accused of crime are not subject to solicitor-client privilege.”

MacKenzie acknowledged that the privilege issue can be murky in some situations where clients and lawyers communicate with each other for multiple purposes. “So the exercise of determining whether specific communications are privileged may require a meticulous review of the communications,” he advised. “Ms. Wilson-Raybould was wise to seek the advice of esteemed counsel to assist in this process.”

Both MacKenzie and Mark Freiman of Toronto, a former deputy attorney general of Ontario and ex-chief counsel to the Air India Inquiry, said that when it comes to an attorney general making decisions about whether to prosecute, or continue a prosecution, she stands alone in making that decision. She has no client in that capacity.

Freiman said “a contorted argument” could be made that solicitor-client privilege would apply if PMO officials attempted to pressure an attorney general under the guise of — and within the context of — seeking his or her legal advice. “I don’t think that’s correct though because you’re talking about the boss of the DPP, and you’re actually trying to do that which it is not possible to do, and it’s prohibited conversation,” he remarked. “In that case, because the alleged discussion itself is an improper one, and is directed at the attorney general in a role where the people who are asking the thing to be done are not the clients in that circumstance, I don’t think it’s covered by solicitor-client privilege.”

Freiman noted, however, that the attorney general is obliged to consider the public interest in deciding whether to go to trial or offer remediation, and in assessing the public interest it is necessary and proper for her to consult and receive input, including from the government.

In respect of what amounts to exerting “pressure” on her to direct or influence the DPP to offer remediation to a company, the attorney general “always has to keep one eye out for the independence of that position and be ready to defend it with all his or her might,” Freiman stressed.

He suggested that communications from the PMO or legislators to the attorney general in respect of public interest considerations in her decision-making role as attorney general should be expressed in writing — rather than verbally at the cabinet table or between officials of the attorney general’s office and the PMO —“so that information is part of a formal process, and so that the process is transparent. … She can receive information through that process, and it doesn’t involve sitting at the cabinet table where nothing that goes on … can ever see the light of day, and there’s no transparency at all.”

Freiman emphasized that an attorney general has a “heavy burden” to decide whether the line has been crossed between permissible input, and impermissible incursions on her independence.

“She is supposed to exercise her own judgment as to where the public interest lies and ‘pressure’ amounts to [pushing] her to make a decision against her own judgment … or to pre-empt her judgment,” he advised. “She’s supposed to be the ultimate decision maker and [pressure] is anything that takes that decision out of her hands.”

In Freiman’s view, when an attorney general’s independence is compromised, he or she is obliged to resign. “There’s a difference between advice, and direction,” from others, he observed. “My view is that attorney general is the most difficult job in cabinet and requires the stiffest spine imaginable.”

Brian R.D. Smith of Gowlings in Victoria, who in 1988 quit as the attorney general of B.C. from the post he had held for five years because he felt that the then-premier did not understand the independence of the attorney general’s role, told The Lawyer’s Daily he does not believe Wilson-Raybould is bound by solicitor-client privilege from speaking to the Globe’s allegation of PMO “pressure.”

“I think it’s a constitutional matter, and the privilege is limited to the legal advice that she gave, and the cabinet confidentiality is limited to what happened during cabinet discussion,” he explained.

“I think she can tell the world. I hope she does,” Smith observed. “First of all, she’s not giving advice to government [in the context of the allegation]. It’s not covered by the cabinet oath. So why would it be privileged?” he queried.

“Put it the other way, you have to prove a privilege. Privilege is a very narrow thing. … I see no privilege in [alleged] discussions involving political aides of the government trying to persuade, or tell the attorney, that she should do certain things on a criminal prosecution. I think that’s a direct interference. The only legitimacy that there is to do that is that amendment to the Criminal Code that was passed last year which allows remediation agreements. So I would say it’s quite legitimate for the prime minister to have a discussion with her about using that section, and quite legitimate for that to be a discussion in cabinet, and that’s something that she would take into account when she decided [to use] her discretion or not [to ask or direct that remediation be offered]. But it’s not for political aides to keep hammering her on that.”

(When Smith unexpectedly announced his own resignation as attorney general in the B.C. legislature, he explained he could no longer work for then-premier Bill Vander Zalm for several reasons, including because the premier asked him to confirm that there had been no requests for an investigation into a friend of the premier’s. “This is an office of great sensitivity and neutrality in the administration of justice,” Smith told stunned MLAs at the time. “In removing myself from this office now it is my hope that I may protect its unique independence. I believe that there is a strong danger that the premier wishes to bring the conduct of the office of the attorney general under closer control by his office and so weaken the independence of the attorney general.”)

University of British Columbia law professor Andrew Flavelle Martin, an expert on legal ethics, particularly as applicable to lawyer-politicians, said that to the extent that solicitor-client privilege applies in the circumstances, when it comes to waiving that privilege, “there is some question as to who exactly does the waiving. The best answer is probably the governor-in-council or cabinet; most likely the prime minister could do it too. … That also goes for cabinet confidences.”

In Martin’s view, it would be appropriate for the attorney general to consult with the PMO on remediation — “for example for the PMO to say: ‘We’re very concerned about the economic impact and the lost jobs that would occur — we think you should do this.’ That would be fine. To direct her to do something, or to pressure her to do something, or for example [to say] ‘Do it or you’re fired’ — that would be inappropriate, and very, very serious.”

Martin argues that an “egregious” situation of that nature would justify a court’s recognition of a common law “public interest” exception to any solicitor-client privilege binding the attorney general in the circumstances. “The idea is that [the attorney general] resigning sends a strong message, but an incomplete message, if it’s not 100 per cent obvious why she’s resigned,” he explained.

The prime minister has repeatedly stated that Wilson-Raybould was never directed to draw any conclusions in the SNC-Lavalin matter.