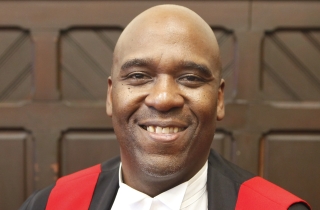 The Canadian Superior Courts Judges Association has launched a YouTube video of a common courtroom scenario in efforts to soothe the fears of newcomers and young people when brought before the bench.

“Weldon,” the subject of the video, ends up in court, first to answer for impaired driving criminal charges and then to deal with the resulting fallout in family court.

Throughout the story, a frightened and skeptical Weldon is assured of the judicial independence of the judge hearing his case.

“The Supreme Court of Canada instructs judges to identify their own prejudices or biases and guard against allowing them to impact in any case,” Justice Moreau tells the viewer in one of four vignettes.

Justice Julie Dutil, president of the Canadian Superior Courts Judges Association (CSCJA) and a judge with Quebec’s Court of Appeal, says the aim is to humanize judges and demystify the court process, particularly for high school-aged youth and newcomers to Canada.

“People are very nervous when they come [to court], but they realize that judges are human beings and they are going to hear … your story and decide what are your rights and who is right and how we should render justice,” Justice Dutil told The Lawyer’s Daily. “The video will maybe demystify [the process] and show them the reality. It shows you that judges listen and hear what you have to say. The main principles we want people to understand are the independence of the judiciary and the rule of law. That video, the benefit is to help [people] better understand what we do. It helps access to justice and benefits the whole community.”

Justice Dutil was asked how the CSCJA is promoting the video.

“In every province, we found judges and public relations people that work in courts to send the information to schools, immigration organizations,” she said, noting that links to the video were sent to all of Canada’s chief justices, as well. “We have people everywhere in Canada … contacting people in the education world and the immigration world so people can get to it.”

It was important that real judges be used.

“For sure, we could have had actors — and we have one in the French version as the narrator — but I think Justice Gass … has a lot of experience and it adds credibility to the video,” she said. “Judges are willing to invest their time in doing this, to help the community and the public understand our justice system. … [Justices Gass and Moreau know] the reality of the courts. … I think it is very important that we had experienced judges to work on this video, both behind the scenes and in the video.”

(Justice Gass has since retired from the Nova Scotia bench and is now a deputy judge in Nunavut.)

She said Justice Moreau was a clear choice as narrator, having successfully voiced a video on child protection when he was a lawyer.

“[Justice Moreau] was so credible in the family series that we asked him if he would do this,” said Justice Leger Sers. “We talked about who should be the narrator. We asked ourselves: To whom would our target group most likely listen? We wanted someone with whom people could relate. … He is a person of integrity. Parents, clients and his community … accepted him as an advocate and a spokesperson. He gave a great deal of time to us in our education series for parents involved in child protection proceedings.”

It was time for the CSCJA to start “using social media as a tool,” she said.

“Lots of judges go into classrooms, etc., but we wanted to see what kind of reception we could get in the social media domain and to give lawyers and judges across Canada a way in which we could educate people about the importance of the independent judiciary and the rule of law,” said Legere Sers. “We went to the academic papers and took key messages [from them] and we wrapped it in a story. We wanted to make it something that would appeal to people who want to know about judges, what they do and how they do it, and would allow them a visual and audio of … what they can expect when they come to court and what is reasonable to expect.”