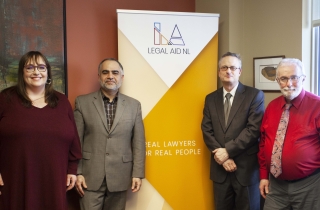 Newfoundland’s legal aid lawyers are hoping a clean new logo and crisp tagline will help abolish an image of inferiority and convince clients they are “real lawyers for real people.”

March 7 marked the launch of a rebranding for the Newfoundland and Labrador Legal Aid Commission (Legal Aid NL) in a bid to confront the ever-lingering stereotype that legal aid lawyers are not as skilled as those from the private bar.

The new logo has the look of a geometric puzzle. The letters L and A are formed by several straight-lined, sharp-cornered shapes, each coloured to symbolize the office's values of accountability, collaboration, compassion, respect and openness.

Legal Aid NL's new tagline, Real Lawyers for Real People, is meant to convey to clients — most of whom fall below the poverty line — that, contrary to popular belief, its lawyers are top-notch, said Harman Khurana, deputy provincial director of corporate services.

“The most frequent questions [from clients] when they walked in were: Are they equally qualified? Are they equally experienced? Do they really have a law degree? Are they mostly students? Will the level of service be less?” said Khurana. “It’s those kinds of questions that we were getting, so ‘real lawyers’ addresses those concerns. The whole project was about [correcting] imperceptions. ... I’ve been with legal aid about a year and a half now, and from day one … there was low morale among staff and complaints internally saying the perception out there is quite negative.”

Khurana hopes the $35,000 makeover will mean a better start to the relationship between lawyer and client.

“When the first interaction with a client starts with a negative perception or doubts about the quality of service you’re getting, it takes weeks to prove yourself with each client before they appreciate that, ‘Yes, I have a proper law degree, I’ve done [many] of these types of cases, [so] don’t worry, you’re in good hands.’ We can cut through weeks of that relationship building if the client already walks in having the confidence that he is with a professional law firm that has tons of experience, and that it’s not just about the lawyer they are dealing with, that it’s about the group that has the expertise.”

“As of now we have only changed the signage in front of the main legal aid office with the new logo.” he said. “We are still in the process of rolling out other material … which will hopefully give us the public exposure and feedback we need to assess impact. It will be at least a few weeks before these items are put in circulation. Our own lawyers are embracing the slogan, which they feel is bold but have indicated that it is too early to know how clients and … colleagues in the profession will respond once the message is fully incorporated in day-to-day communications.”

Khurana also hopes a better image will boost morale among the 70 legal aid lawyers spread throughout the province. He noted that his province does not have a law school and that, as a result, Legal Aid NL must attract talent from other jurisdictions.

Khurana said compensation for a senior legal aid lawyer, after one factors in salary and benefits, is “competitive” with that of the private bar.

Khurana says there is an overtime policy in place, but his lawyers rarely file any.

“I guess the culture in our organization for years has been a mutual recognition that people have come here and taken these jobs for the right reasons,” Khurana said. “They haven’t come here for the money; they’ve come here to give to the community. I’ve never received a claim for overtime yet.

“They care about the clients and they are passionate about what they do. I’ve found that if they need to put in a few extra hours over the weekend or the evenings, they just do it without going through the need for formal approval.”