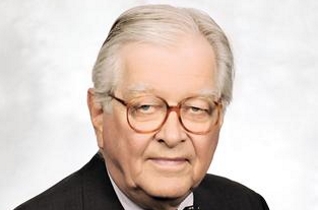 A couple of days before David Scott passed away he called Pro Bono Ontario (PBO) to speak with its executive director, Lynn Burns. His last words to her were, “Keep up the good fight, kid,” said Burns, adding that she hopes his legacy of strong leadership will inspire other lawyers.

“I did hear he was making calls right up until the end, trying to secure funding for us [PBO]. That’s just such typical David,” she said, “he always called me ‘kid.’ ”

Scott, one of Canada’s pre-eminent trial and appellate lawyers, died on March 21 of lupus and respiratory complications. He was 83 years old.

Known as a “giant of the legal profession,” Scott was renowned for his dedication to access to justice. Burns said he “poured himself” into PBO’s mission and “never lost sight of the people we serve.”

“He walked the walk. He was our very first volunteer at the Ottawa law help centre when we opened our doors. He continued to provide legal advice monthly at the help centre. We always laughed because he found the work so exhilarating. It’s well known that he acted for prime ministers, chief justices, but this work was equally important to him; to help vulnerable people who had nowhere else to turn,” she explained.

When Burns would see Scott volunteering at the help centre she would often say to herself, “do these people have any idea who they’re taking advice from?”

“He’s such an icon in the legal profession, and of course he’d never want them to know, but he was just remarkable that way,” she added.

Scott was admitted to the bar in 1962 and joined his father, Cuthbert Scott, and fellow lawyer John Aylen, at Scott & Aylen, which would later merge with McMaster Gervais, of Montreal; Borden & Elliot, of Toronto; Ladner Downs, of Vancouver; and Howard Mackie, of Calgary, to create Borden Ladner Gervais LLP (BLG).

His work in criminal law, administrative law, intellectual property and corporate commercial litigation earned him a reputation of being at the apex of the legal profession and he was appointed as Queen’s Counsel in 1976.

Scott was elected as a fellow of the American College of Trial Lawyers in 1984 and became its first Canadian president in 2003-2004. His numerous appointments include being selected as the chair of the Triennial Review Commission in 1996, receiving The Advocates’ Society Medal in 1999, the Carlton Medal in 2003 and the Order of Canada in 2011. He also received the University of Calgary Law School’s Milvain Chair in Advocacy, the University of Saskatchewan College of Law’s inaugural Silas Hylak Chair in Advocacy and the Lexpert Lifetime Achievement Award in Pro Bono in 2010. The Ontario Bar Association’s annual award for contributions to pro bono is named in his honour.

“Both as a lawyer and as a human being, David Scott was the gold standard. In court and out of court he was unfailingly civil to his fellow lawyers, but never at the expense of his clients’ best interest,” said Colin McKinnon, former judge of the Ontario Superior Court of Justice.

McKinnon said he had the “good fortune” of having Scott appear before him as a trial lawyer and that Scott’s cross-examination constituted a “how-to manual for effective advocacy.”

“I recall one particular trial, a long difficult trial, where his cross-examination of the main defendant, which lasted one day, it could have lasted much longer, but he was so well prepared that it lasted one day, and it completely altered my view of the entire case. I changed my mind, in other words. It was a six-week case and I changed my mind in that one day. He was just so incredibly effective,” he stressed.

McKinnon noted that when Scott appeared before the court you knew he’d be “incredibly well prepared.”

Scott’s legacy will be an “impressive” one, McKinnon explained, noting that the legal profession can learn from him, not only the importance of preparation, but humility, devotion to the client and their cause, a “deep abiding care” for the profession itself, and the need for civility with fellow practitioners.

“He embodied the great lawyer and the great human being,” he said, recalling Scott’s sense of humour and devotion to family, especially his wife, Alison, who he was married to for 59 years.

“He loved to laugh. He was wonderful with compliments. He had the most beautiful handwriting and he loved to send notes to other lawyers after they’d done a good job, or to me if I’d rendered a judgment that he liked. He’d write me a note; a lovely note complimenting me. Things like that, he was just very, very thoughtful,” he added.

Meaningfully, McKinnon noted, “I think he leaves a void that will never really be filled.”

This sentiment was echoed by Burns, who said Scott’s passing is an “enormous loss to all of us, to the entire profession, to the fight for access to justice in Ontario.” PBO’s executive director doesn’t think the organization would be where it is today, serving 29,000 clients in the past year, if it weren’t for Scott.

“David was involved in Pro Bono Ontario from day one. He was on our first board of directors,” she said, noting that he was always “fighting the good fight, trying to get more lawyers to be involved.”

“I believe that his legacy will continue,” she claimed.

Scott was a “great Canadian,” McKinnon added, noting the lawyer “loved this country with a deep abiding passion.”

“He cared deeply about people, particularly the less fortunate in our society. He had a real love and affection or them and for their lot in life and always strove to improve it," he said, highlighting Scott's work with PBO “bringing free legal advice, from experienced lawyers, to people who just can’t afford lawyers.”

McKinnon noted that as Scott’s “days were dwindling,” he remained concerned about the future of PBO.

“[He] worried about the funding because he had worked so very, very hard to make it happen,” he stressed.

The former judge said that, historically, the legal profession has been involved with pro bono work and that in the sense lawyers are an “amazing profession.” He noted that Scott was a driving force in this area since he was involved in pro bono before legal aid was constituted as a formal entity.

“In terms of the Pro Bono [Ontario] project itself, I think in large part, that was David’s idea. He fought very hard to bring it to fruition and was terribly worried that it might disappear,” he said.

John Murphy, the national managing partner and CEO of BLG, will remember Scott as a generous man who enjoyed sharing his knowledge with recent calls to the bar.

“He was truly devoted to the young people in the firm. There’s nothing he enjoyed more than getting a couple of the young associates, junior partners working on his matters with him, to challenge him, to keep him sharp, to take out the ideas and arguments. He did that until the very end,” he explained.

Murphy noted that many of BLG’s training sessions were inspired by Scott and his “phenomenal” work as an advocate and barrister. He said Scott “had his fingerprints on” on everything from courses on ethics and evidence to advancing an argument.

“He was the lawyer of choice for prime ministers and heads of international companies on matters of significant controversy. It is most powerful when you juxtapose that reality with the fact that he was so dedicated to access to justice and he gave of his time to even the most junior people in the profession. That is the magnanimous David Scott,” he added.

Murphy said Scott had a “generosity of spirit” and noted that he “gave so much of himself for the good of the community.” Not only was he a renowned barrister, but he was involved with the John Howard Society, CARE Canada, the Ottawa General Hospital, the United Way, the Ottawa Heart Institute, the Canadian Stroke Network and Operation Come Home. Murphy noted his impact on the profession through his position on the National Action Committee on Access to Justice to Concordia University.

“He was a very kind and generous man and unpretentious, a rare trifecta,” he added.

“If you knew David Scott, and if he impacted you and your profession in any way, please donate to Pro Bono Ontario. No matter how big or how large the donation, it would be a real tribute to his legacy if people were willing to [donate],” said Murphy, adding there’s nothing Scott would have appreciated more.

According to Scott’s obituary in the Ottawa Citizen, a funeral mass will be held on March 28 at 10:30 a.m. in Notre-Dame Cathedral Basilica on Sussex Drive in Ottawa. He is survived by his wife, Alison; their children, Blair, Sheila, Tony and Sandy; and four grandchildren.