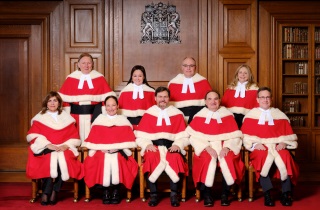 SCC was more divided than united on cases in 2018; dissents rose, but case intake and output fell

For the first time in decades, in 2018 the Supreme Court of Canada was more divided than united on the outcome of appeals — setting a record low 48 per cent unanimity rate — after two years of growing division among the judges, new court statistics disclose.

On April 12, the top court supplemented its informative, if dry, annual statistical report on its work flow (which is much anticipated by court watchers), with a revamped and colourful “annual review” aimed at engaging the wider public.

The Supreme Court’s new annual review, disseminated on social media and posted on the court’s website, delivers on Chief Justice Richard Wagner’s vow when he assumed the court’s leadership in December 2017, to enhance the court’s transparency and make its work more accessible to Canadians. It also follows other successful outreach initiatives by the court in 2018, which included rolling out its well-received plain language summaries for every judgment and the chief justice accepting an invitation to answer questions from Hill reporters at a press conference.

The Supreme Court’s new annual review features candid photos and formal portraits of the judges, as well as graphic representations of the court’s workflow, plain language summaries of some of the year’s most important cases, information on some of the other activities of the court, such as hosting foreign jurists, and also links to all the courts’ decisions in 2018.

Of special note to the bar, however, are the statistics showing how the court is handling its workload — including the number of cases it heard, the number of judgments it rendered, and how long the judges took to decide the cases, on average. The court continues to post those statistics on its website in an easy-to-read summary table, with comparative numbers going back a decade.

Overall, the Supreme Court’s annual review and statistics for 2018 paint a picture of a court that continues to fire on all cylinders, with judges who are working very hard to produce their judgments with speed and efficiency.

The growing division on the court is, however, striking.

Last year the judges divided on the results of appeals more often than they agreed (52 per cent of the cases) for the first time in recent memory (The Lawyer’s Daily consulted the court’s annual statistics dating back to 1990.)

The court’s 48 per cent unanimity rate on the results of cases in 2018 compares to a 71 per cent average unanimity rate in the preceding 18 years while Chief Justice Beverley McLachlin led the court (she retired in December 2017).

However, the court’s disagreements did not emerge last year — they have been trending higher for three years, i.e. since 2016.

The growing number of dissents has coincided with the turnover of a majority of the court’s members — a personnel shift that saw Justices Clément Gascon and Suzanne Côté arrive in 2014; Justice Russell Brown arrive in 2015; Justice Malcolm Rowe arrive in 2016; and Justice Sheilah Martin at the end of 2017.

Jeff Beedell, a senior member of Gowlings’ Supreme Court practice group in Ottawa, said it is too early to say with respect to Justice Martin, but the judges who were appointed from 2014 through 2016 — Justices Côté, who dissents most often (both on judgments and on leave applications) and Justices Gascon, Brown and Rowe are the same judges who signed the most dissenting opinions in 2018. “We seem to have very independent-minded judges that have joined the court in the last five years,” he remarked.

He suggested the recent growth in dissents “may be a very encouraging trend” for those who want to shift the common law, since today’s dissent may turn into tomorrow’s law — as occurred in 2015 when the Supreme Court struck down the assisted suicide ban, after upholding it 23 years earlier.

“We have a court that’s willing to disagree with each other and to present alternative views of interpretation and legal policy that could lead, in time, to development of Canadian jurisprudence,” Beedell observed. “And if you’re law professor, for sure that’s good and interesting.”

However, for lawyers who rely on Supreme Court jurisprudence to predict the outcomes of their clients’ cases, and either recommend settlement, or argue the law as they understand it, based on Supreme Court case law, it can be “more challenging,” he suggested. The problem may be even more acute with concurring opinions, he noted. “If we’re aiming for clarity in the law, the more opinions written — whether in majority or on dissent, the more potential confusion there is.”

(Beedell pointed, by way of example, to a recent headscratcher, J.W. v. Canada (Attorney General) 2019 SCC 20, in which Justice Côté’s concurring opinion on behalf of two judges had to be read in conjunction with Justice Brown’s dissent on behalf of two judges (i.e. rather than with Justice Rosalie Abella’s three-judge plurality opinion) in order to get a majority view on the main legal issue (but not the result) in the case. The Supreme Court does not publish statistics on how often the judges write concurring opinions, but concurrences, also known as dissents on the reasons, are not uncommon either.)

“Multiple concurring majority reasons can be as problematic — perhaps more so — than a clear dissent just because you end up with different lines of reasoning,” that don’t provide practitioners and lower courts the clear legal guidance they can apply in their cases, Beedell said.

Eugene Meehan of Ottawa’s Supreme Advocacy said it is worth asking whether more dissents at the Supreme Court are in fact a negative.

“In many ways, dissents positively contribute to the law and more accurately reflect the fact that the type of issues getting to the Supreme Court don’t lend themselves to a simple right or wrong answer,” he observed. “Complex questions make for complex answers and, with nine judges definitely not clones of each other, why shouldn’t they express their considered view? The only potential downside of a divided court is it can sometimes result in split decisions that are challenging for judges and lawyers to unravel, let alone ordinary Canadians. But is this a small price to pay for ensuring we have a robust and responsive legal system?”

“Dissent can perform a valuable function, especially in a high court,” Mathen agreed. “That said, increasing rates of dissent may suggest that the court’s members are less able to persuade each other of competing views. Over time, that can lead to a division of justices into ‘camps’ that is unhelpful.”

Mathen added that what the judges are disagreeing about is key. “If they are about, say, whether a law is discriminatory under s. 15 of the Charter, that is one thing. If, however, the dissents reflect finer points of disagreement on which the court cannot find common ground, that may hamper the court’s ability to provide as clear guidance to lower courts as it may wish.”

The Supreme Court’s statistics reveal that the judges heard fewer appeals of national importance in 2018 — 45 cases in which the court granted leave — down from 49 the year before, and indeed the lowest number in more than a decade.

By contrast, the judges spent more time than usual hearing criminal as-of-right appeals, which are triggered by dissents in the appellate courts below. There were 21 last year.

Last year the court kept up its speed and efficiency — with the average time lapse in 2018 between the filing of an application for leave to appeal and the court’s judgment being 17 months — which is at the lower end of the range over the past 20 years.

The time lapse between when leave to appeal was requested and when it was decided in 2018 rose to 5.5 months however — up from 3.8 months the year before.

“Yes, leaves are taking a wee bit longer, and yes, there are some dissents from the judges on leave applications, although that has happened in previous courts too,” Meehan pointed out. “Sometimes leaves are deliberately parked to wait for a key appeal to be dealt with, then the leave decision is given right after — sometimes the following week,” explained Meehan, a former executive legal officer with the top court. “Anecdotally, that’s happened with class actions and standard of review appeals.”

There were 525 leave applications to the court in 2018, reflecting the same level of fairly steady demand for the past 10 years.

The court agreed to hear fewer cases, however, perhaps because it also received 26 as-of-right appeal notices — the highest number in two decades.

Of the 484 completed leave to appeal applications that were submitted to the judges in 2018 (down a bit from 2017, but down by more than 100 applications from 2016) — the court agreed to hear only eight per cent (i.e. 39 appeals.) The average leave-grant rate over the previous decade was 10 per cent.

“If you start to look at what’s happening in 2019 in terms of the number of appeals that are on docket [the leave grant rate] is, I think, beginning to affect how many appeals are really available to be heard,” Beedell remarked.

Thus in the 2019 winter session, the court heard 25 appeals — of which nearly one third (eight) were as-of-right appeals. “That’s work that the court has to take, but it indicates that the number of leaves available to hear are not as high,” Beedell remarked.

Of the 14 appeals now on the court’s spring docket, half (seven) are as-of-right appeals. “It puts some reverse pressure on how much space is available for criminal and civil appeals by leave,” he said. “While there is no quota — there is a limit to how many appeals they are able to handle in a year, and so perhaps the as-of-rights climbing up are squeezing the docket.”

Beedell noted the judges continued to be “tremendously hard working” in 2018, and were faced with the country’s most difficult and important legal cases.

In 2018 the judges were grappling, however, with many high-stakes constitutional appeals and other difficult and high-profile cases, including the interprovincial trade case R. v. Comeau, the Trinity Western University law school cases, the pan-Canadian securities regulation reference, the Mikisew Cree First Nation case, the Churchill Falls case, the Groia lawyer-civility case, and R. v. Boudreault, whereby the court struck down the Criminal Code’s mandatory victim surcharge as a type of cruel and unusual punishment, akin to the public shaming of impoverished, addicted and unemployed offenders.

The court took on a very diverse caseload in 2018, Beedell noted. “Their decisions reflect a real effort to understand the social, economic and political context of some of these cases, and arrive at both a just and ... an equitable and humane outcome.”

He cited Boudreault, for example, as “a very encouraging example of the humanity of the court. You really saw in the reasons of the court an understanding of the circumstances of those involved, and they rendered a decision that was more than just a direction on the law.”