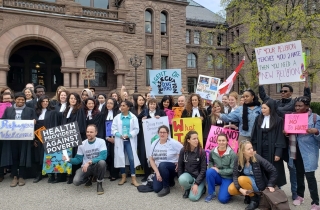 A May 7 rally at Ontario’s legislature by lawyers and doctors protesting cuts to legal aid was about “life and death” for vulnerable people in need of advocacy, says an organizer.

A group of about 150 people descended on the provincial government building in downtown Toronto at mid-morning, with around 20 going inside and disrupting the day’s session.

The demonstration, which featured many lawyers in their robes, waistcoats and tabs and doctors wearing lab coats and stethoscopes, also included paralegals, immigration consultants and various health care providers.

As part of its April 11 budget, Premier Doug Ford’s Progressive Conservatives cut funding to Legal Aid Ontario (LAO) by 30 per cent for the 2019-2020 fiscal year.

In particular, Ford’s sudden cutback has left LAO with only federal funding for immigration and refugee services, largely neutering its ability to handle new cases — something critics say will leave vulnerable people in precarious positions.

“Many of [my] colleagues [have] large refugee practices, so they are going to be in a situation where they can do the initial paperwork for the refugee client, but they won’t be able to actually serve that client after that, so that client is going to walk into a hearing — which is basically a quasi-judicial hearing — and they’re not going to have someone there to help them get through it,” Scott told The Lawyer’s Daily.

He said the funding reductions will radiate into the realm of domestic violence, as it will mean some claimants having to return to abusive spouses in countries that lack protections against such abuse.

“A lot of our stuff is life and death,” he said.

Toronto psychiatrist Michaela Beder said the stress of navigating Canada’s immigration system without adequate legal help will further impact the health of claimants who may already be coming from traumatic situations in troubled countries.

“I’ve seen a lot of clients who are navigating their way through the immigration system in various ways and a huge concern is knowing how vulnerable many people are,” said Beder, who also took part in the rally. “It will have a devastating impact when there is no more legal aid coverage to provide representation for these people at hearings. Under these cuts, there is only funding for people to get assistance with their basis of claim or their narrative … but there is no longer any funding to support people for any other aspect of their refugee or immigration related difficulties.”

Lawyer Omar Ha-Redeye, of Toronto’s Fleet Street Law, said that while legal aid is far from perfect, Ford’s cuts will cause serious setbacks in this area.

“I think legal aid does need widespread reform, but the challenge is making such a sudden cut and such a significant cut to legal aid in this manner without any real consultation, without any heads-up to the legal community; [it] simply means that individuals who are marginalized and vulnerable are going to be deeply affected, and we’re specifically talking about refugees … as one of the big impact groups,” said Ha-Redeye, who called the Ford cuts “political.”