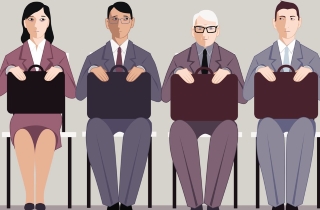 Legal professionals should not be dealing with age discrimination in 2019

Rather than acting as a catalyst for age discrimination, legal professionals should implement policies and procedures that preserve employment security and integrity of senior applicants. This seems to be the old adage of “The cobbler’s children have no shoes,” applied to the legal profession.

Moore v. Ferro (Estate) 2019 HRTO 526, a decision rendered in April 2019, centred on a number of issues central to hiring in the legal profession: racialized lawyers, foreign-trained lawyers and age discrimination. In his decision, Human Rights Tribunal of Ontario (HRTO) vice-chairman Mark Hart wrote that the estate of deceased lawyer Lou Ferro was vicariously liable for discrimination and reprisal against lawyer Philton Moore. Moore self-identifies as a black man of Afro-Caribbean descent and was 45 years old in 2011.

Further, it was apparent in Moore that “new calls” were being preferred over the applicant who was a senior 45-year-old lawyer.

This case also revealed the unconscious bias of hiring officials who relied on negative stereotypes that label older workers as unadaptable, culturally unfit, computer illiterate, with entrenched habits, technophobic and less energetic. They failed to appreciate that senior professionals come with years of life experience, maturity and wisdom that can benefit the overall progress of law firms and government.

Rejections such as these devalue and degrade senior applicants who feel hesitant to apply for certain positions even after providing excellent legal services for many years.

Part of the problem is the tendency to hire based on “year of call” in the legal profession. However, “year of call” can also be a proxy for age. While a five-year call could be 60 years old if they were a mature student in law school, it is physically impossible for a 30-year call to be 25 years old and the vast majority of five-year calls are in a narrow age range.

This entrenches accepted notions of ageism in the legal profession where job advertisements look specifically for “new calls” and “new calls only.”

Viewed in the absolute, the “year of call” concept actually reinforces ageism in the legal profession.

In another HRTO case in 2013, Reiss v. CCH Canadian Ltd. [2013] O.H.R.T.D. No. 783 a senior applicant was subject to age discrimination by a legal publisher. In this case, the applicant intentionally omitted identifying information relating to his age while applying for a commercial legal writing job and agreed to a lower salary than the budgeted amount. Pieces of missing information (year of graduation) in his job application were considered as “red flags” by the employer, who rejected the applicant for an interview after clarifying the missing dates.

Further inspection revealed that the employer’s communications were tainted by age discrimination because “they moved toward candidates that were more junior in their experience and salary expectation.” Therefore, the decision was based on stereotypical views about an applicant’s age and “year of call” that made Peter Reiss a non-suitable candidate. This example shows that legal employers are not immune from age discrimination even when they find senior professionals who are ideal candidates.

Such discriminatory assumptions, language and hiring practices should be removed entirely because they destroy the basic concept of justice and equality for all.

Ironically, lawyers seem to have created their own human rights exemption thorough the legal structure of partnerships. For instance, in the case of McCormick v. Fasken Martineau DuMoulin LLP  2014 CLLC, the court applied the control/dependency test to establish that partners of a firm can be fired at the age of 65 so long as that is in the partnership agreement because they are not employees.

This decision allows partnerships, such as large law firms, to uphold a mandatory retirement policy, far after such a policy has been deemed inappropriate for the rest of Canadian workplaces.

Clearly, the legal profession is still behind in tackling age discrimination among our own members. Nonetheless, eliminating age discrimination would not only improve the reputation of law firms, but it will economically benefit governments because continued employment implies more tax revenue, decreased retirement benefits and lower dependency ratio.