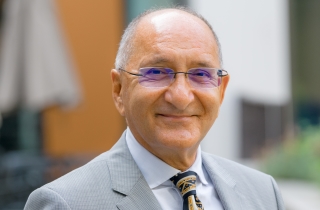 Ryerson University’s Faculty of Law is positioning itself as “the new kids on the block” in legal education. With classrooms in downtown Toronto, a focus on technology and a designated integrated practice curriculum (IPC), the faculty’s interim dean, Anver Saloojee, is encouraging the legal community to get “on board.”

“It’s going to be a phenomenal journey,” Saloojee told The Lawyer’s Daily. “It’s the first new law school in the city of Toronto in close to 120 years. We’re the new kids on the block.”

“We need expertise; we need advice; we need encouragement, and we need support from the entire legal community. It will be an exciting journey for that first group, and every other group of students who come after them. It’s great for the city. It’s great for the province, and it’s phenomenal for the legal community,” he added, explaining that Ryerson’s four pillars of focus will set it apart from other law schools.

Saloojee said the four pillars are: technology and “its applications both to pedagogy and service delivery;” equity, diversity and inclusion; access to justice, “which is a huge problem for the residents of our province;” and strong academics.

The interim dean also highlighted the Law Society of Ontario’s (LSO) decision to designate the school’s juris doctor (JD) program as an IPC as a benefit for students.

The LSO approved Ryerson’s IPC proposal on April 25, after a report on the matter was presented to Convocation by former bencher Peter Wardle. Wardle explained that the LSO had approved the establishment of the first IPC at Lakehead University in November 2013, noting that prior to Ryerson’s proposal, Lakehead was the only Canadian law school to integrate a Carnegie-type approach into the law school curriculum.

Saloojee said the law school’s focus on technology is a part of Ryerson’s reputation for being a centre for “innovation” and “technologically oriented.”

“Globally, there’s a huge call for the implementation of technological innovation in legal service delivery, and Toronto certainly is becoming a major hub for legal innovation. At Ryerson we have the number one university incubator in the world, it’s called [The] DMZ, and attached to The DMZ we also have the Legal Innovation Zone,” he explained, noting that Ryerson will also be using technology in its “holistic” approach to assess applicants.

The application process includes a written statement, an online video interview and considerations of grade point average and LSAT score. Saloojee said the online video interview is done through a company called Kira Talent and applicants will be able to practise their answers before submitting them online. He noted that this online aspect of the process is a “major innovation” for the law school program.

The school will accept 150 students for the first-year class and then an additional 150 every incoming class after that.

Although Ryerson has committed to begin accepting applications in August 2019 for classes starting in September 2020, some details still need to be nailed down, such as a permanent space, cost of tuition, hiring a dean and getting approved for the Ontario Student Assistance Program (OSAP).

“We’re still working on our tuition,” he noted, adding that as soon as the school knows the outcome of its OSAP eligibility it will release a tuition number.

Jessica Georgakopoulos, director of communications for the Office of the Minister of Training, Colleges and Universities, said that last year, the Ministry reviewed Ryerson’s submission to create a new juris doctor program in Toronto and “based on that review, we determined it was not in the best interest of the people of Ontario to approve the proposal for the purposes of operating grant funding.”

“We considered many factors in making this decision. Factors like: whether the program duplicates other programs in the province; labour market demand; student demand; appropriate tuition rates; and alignment with Ryerson’s Strategic Mandate Agreement,” she added.

Georgakopoulos noted that according to both the Higher Education Quality Council of Ontario and the LSO, there is a “surplus of law students seeking articling positions.”

“It is also noted that according to Ontario Job Futures, the current employment outlook between 2017 and 2021 is ‘average’ for lawyers, meaning jobs are expected to be more difficult to find, the probability of unemployment is higher, and wages and salaries have recently increased at a slower rate than other occupations,” she explained.

“We remain committed to working with Ryerson University on programs that deliver results for their students, giving them the skills needed in the workforce of the future,” she added.

Although OSAP eligibility has not been secured, several law firms have stepped forward to provide student scholarships and awards to assist students financially.

According to a press release, “Torys LLP Scholarships for Indigenous Law Students will provide renewable awards for Indigenous students; McCarthy Tétrault LLP Law School Scholarships for First Generation Students will offer renewable awards for students who are the first generation in their families to attend post-secondary education, with priority given to newcomers to Canada; the Blakes Scholar scholarships will be awarded to students entering first year, who demonstrate an aptitude for business or entrepreneurship, and the Hicks Morley Hamilton Stewart Storie LLP Law School Scholarships will be awarded to students from historically underrepresented communities.”

According to the school’s website, Ryerson is “leveraging the firms’ support to create nearly $750,000 (to date) worth of student financial support. A key match came through Indspire’s Building Brighter Futures: Scholarships, Bursaries, and Awards program, which will provide entrance and follow-on awards of $20,000 annually for several Indigenous students at the law school.”

“We believe that it’s essential that we get as many law firms and other donors as possible to help us. After all, law school is not necessarily very cheap compared to other programs,” said Saloojee.

“We hope to offset that with scholarships and bursaries and we’re working incredibly hard in the sector more broadly, not just with the legal firms, but more broadly with tech companies, and so on, to assist us to ensure that our students can have financial access,” he added.

The interim dean noted that the school has a “temporary location” right now, which Ryerson is in the process of retrofitting. The space, Saloojee explained, is “well over 20,000 square feet” currently occupied by the School of Nursing.

“The faculty in the School of Nursing will very shortly be moving to a new building, which is our Life Sciences building. As soon as they move, the process of renovating and retrofitting that space for the law school will begin,” he said, noting that Ryerson is “looking at a number of other locations to house the space more permanently.”

Saloojee stressed that the new law school will “absolutely” remain in downtown Toronto.

“Ryerson is the downtown university, deeply connected to the city, so the law school would have to have that same DNA built into it,” he said.

As for faculty and an inaugural dean, Saloojee noted that he’s already begun speaking to Ryerson professors in the business of law and criminology programs about cross appointments and a job ad for the inaugural dean has been posted.

“I’ve engaged with the faculty members to think about which areas of law they would be engaged in and, then in terms of our collective agreements, what we call cross appoint them to both the Faculty of Law and their home department. We’re looking at 10-12 faculty members already who will be cross appointed,” he said, noting that once the cross appointments have been put in place, a departmental hiring committee will begin the process of hiring external faculty.

“In addition to the cross appointments, we’ve committed to hiring an additional five faculty members for each of the years as full-time appointments. And then, again, given the innovative nature of our program, we’ll be looking at a ton of adjunct professors,” he added, explaining the importance of mentorship and co-teaching in the classroom.

As for his “ideal dean,” Saloojee said he’s looking for someone who “embraces the four pillars” of the Faculty of Law.

“A dean who embodies those four visions and works with the entire Ryerson community to implement that vision would be my ideal dean,” he said.