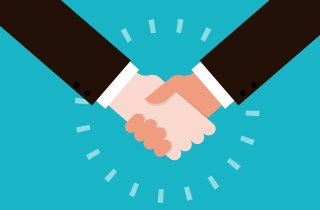 From Estonian AI judges to robot mediators in Canada, U.K.

Having previously written about Estonia’s pilot AI judge, it comes as no surprise that I am here to report that a “robot mediator” has settled a court case for the first time, demonstrating a further shift towards the embrace of legal technology and tools to efficiently and effectively litigate.

The dispute remained ongoing for three months, when Graham Ross, mediator and lawyer recommended that the parties make use of Smartsettle ONE — an online dispute resolution (ODR) tool developed in British Columbia which employs algorithms that learn the bidding tactics and priorities of the parties to a dispute and helps move them towards a settlement.

Using the system, each side to a conflict assesses what they hope to settle for, as well as what they are willing to settle for and submit their hoped-for resolution as well as a blind bid of their BATNA (best alternative to non-agreement).

Immediately thereafter, the computer generates a dollar amount, based on each party’s input of the range of settlement, while favouring the first party to submit a compromise. The system allows both parties to privately make offers and counteroffers by moving flags along sliders — showing the other side a green flag, which represents their hoped-for figure, all the while a yellow flag remains hidden (the blind bid).

In this particular case, the system allowed the parties to settle their dispute in less than one hour.

Where there are quantifiable issues to resolve (as in many personal injury cases, where the question is simply “how much are you willing to settle for?”) and the parties are not looking to repair or preserve a relationship, this is a helpful tool.

ODR is growing rapidly — and it comes as no surprise given the increased legal fees associated with unsuccessful mediation, as well as relatively easy to comprehend monetary disputes. Court86, an African platform for dispute management, allows consumers who have issues with online purchases to file disputes online and proceed with arbitration, mediation and other electronic dispute resolution methods.

Like Estonian judges, traditional ODR typically targets high-volume cases with low monetary claims, such as debt collection. Using this approach, the process allows a mediator to work with the parties to quickly arrive at a settlement. By incorporating ODR into the judicial process, as with legal research AI-tools and “robot judges,” courts seek to not only increase access but also reduce the costs associated with resolving disputes.

Estonia’s pilot “AI” judge arrived after the Estonian Ministry of Justice requested that its chief data officer Velsberg Ott’s assist in designing a “robot judge” that could adjudicate small claims disputes of less than 7,000 Euros. In concept, the two parties to a dispute upload documents and other relevant information to a court platform, and the AI issues a decision that can be appealed to a human judge.

Prior to the introduction of Estonia’s AI judge, I wrote about Jane Philpott’s, former Canadian minister of digital government, launch of the federal government’s Directive on Automated Decision Making, purported to use AI to assist the government in replacing mundane administrative tasks.

Shortly therefore, I commented on the Ontario Superior Court of Justice’s pilot project launched on Feb. 11, 2019: the Digital Hearing Workspace (DHW). This program is used to deliver, store, organize and retrieve all documents relevant to a file, electronically. The program is now in force and applies to all Commercial List proceedings. Failure to upload documents to the platform are addressed by a presiding court official.

Tools such as Alexsei use machine learning to identify relevant and up-to-date case law across the web, and scan the Internet to discern lawyers’ opinions on cases as identified in their legal blogs. The software then generates a legal memorandum within 24 hours of being asked a legal research question.

In late 2018, I commented on Justice Alan Whitten’s decision in Cass v. 1410088 Ontario Inc. 2018 ONSC 6959, in which the Superior Court of Justice was called upon to consider a costs award following a successful defendant’s summary judgment motion. Justice Whitten not only dismissed the defendant’s plea for disbursements expensed on legal research due to its failure to use free legal research services, but went even further to find that AI tools should have been employed and would have “significantly reduced” the client’s legal fees.

SmartSettle ONE is just another step in the saga of the eventual automation of certain legal tasks and processes. Taken in harmony, the last year in Canada alone has seen the adoption of AI tools such as Alexsei, directives within the federal government regarding AI’s replacement of mundane administrative tasks, the DHW, requiring counsel and parties to upload their documents to an electronic filing system, judges’ reprisal for the failure to use legal research AI tools to assist in conducting research and saving client legal fees, and my personal favourite, Google’s Duplex which I hope will arrive into our industry soon.

As always, and now speaking from my own personally founded AI-heavy law firm, I repeat, adopt and reiterate that our industry’s resistance toward the use of AI tech will create great hurdles to lawyers and their staff alike. At my firm, I am employing the use of electronic filing and document management systems, as well as AI-powered legal research tools and software, to efficiently and effectively litigate for my clients.

Should lawyers choose not to live up to the challenge, you could end up with a very disappointed client, potentially large and assessment-worthy client cost consequences, and as of now, unsuccessful mediated and arbitrated disputes.

Tara Vasdani is the principal lawyer and founder of Remote Law Canada. Her practice centres on employment law, civil litigation and remote work. She has been featured in Forbes. She was the first Canadian lawyer to serve a statement of claim via Instagram, and you can reach her directly at tara@remotelawcanada.com.