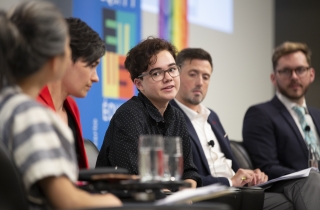 Removing LGBTQ+ identities from Ontario’s sex education curriculum last year caused a backlash that included legal challenges from teachers and youth alike. The importance of inclusion and the dangers posed by that “erasure” were highlighted in the Law Society of Ontario’s (LSO) Pride Month program on June 19.


The panellists were Noah Sparrow, a grade 10 student who filed a claim to the Human Rights Tribunal of Ontario (HRTO) over the province’s sex education curriculum changes; Andrea Luey, a litigation lawyer with Justice for Children and Youth, and counsel for Sparrow; Marcus McCann, a human rights lawyer with Symes Street & Millard LLP, and counsel for another HRTO youth applicant (known as AB); and Jake Pyne, a Banting postdoctoral fellow at the University of Guelph.

The panel was moderated by Amy Wah, a policy lawyer with HIV and AIDS Legal Clinic Ontario (HALCO).

“A number of legal challenges were filed seeking to stop the repeal and maintain the comprehensive and inclusive curriculum. Two applications for judicial review were filed [with] the divisional court in Ontario, as well [as] three individual trans students filed Human Rights Tribunal applications,” she explained, noting that Sparrow was one of those applicants.

Sparrow told attendees that when the curriculum change was announced he was “disappointed.”

“Canada, but specifically Ontario, has come such a long way with being accepting and [inclusive]. But I wasn’t very surprised. I felt sort of scared for a lot of kids, especially those who were younger than me with these changes,” he said, adding it “creates a culture that allows bullying and it allows censorship.”

Wah noted that the results of a 2017 study, “Being Safe, Being Me in Ontario: Results of the Canadian Trans Youth Health Survey,” found that bullying and violence were major issues for trans youth.

“In fact, two-thirds of participants reported discrimination because of their gender. Two-thirds reported bullying (being bullied, taunted or ridiculed), [and] one-third of school age youth reported being physically threatened,” she said, adding that the study recommended that school’s shift the “climate” by including gender diversity into curriculum plans.

Pyne, who was involved with the study, said the research raises a lot of questions about “trans youth and their sense of belonging.”

“It raises a lot of questions about that and the removal of that content from the curriculum,” he said, noting that approximately 40 references to gender identity were removed.

“It raises those questions about whose space is it?” he said.

“It’s a power struggle over public space and over personhood. I think it’s part of a larger, unofficial referendum we’re seeing on whether trans people have personhood in this society, whether we are equal people, whether these institutions belong to us as well,” he stressed.

Pyne explained that the “erasure” of trans people sets the stage for violence and bullying.

“Policies aren’t developed to protect people who don’t exist, so there’s this question of do trans people exist? You wouldn’t know it by looking at the school curriculum and I think that sets the stage for the bigger levels of extreme violence that we see,” he said.

McCann added that the central claim of his client, AB’s, case was that “trans youth are entitled to a sex-ed curriculum that includes them, that anything less than that is discriminatory.”

He added that another case brought by the Elementary Teachers’ Federation of Ontario (ETFO), ETFO v. Ontario (Minister of Education) 2019 ONSC 1308, was primarily about whether the effect of the removal of the sex-ed material from the curriculum, plus Premier Doug Ford’s public statements, amounted to a “chill that prevented teachers from talking to their students frankly about important issues,” such as trans topics.

Luey noted that Justice for Children and Youth has “seen how marginalization can lead to social, health and legal problems at home, at school and in the community.”

“We also understand that when you’re talking about decisions that impact young people directly, the most important, the most accurate and the most powerful voice is that of the young person themselves, so that needed to be part of the conversation,” she explained, adding that the result of the ETFO decision led to the death of Sparrow’s case.

Wah adding that “what we’re stuck with now is the principle from the decision in ETFO that equity seeking groups, including trans youth, are included so long as their teachers have the wiggle room to include the content that is reflective of their realities.”

“We’re looking for comprehensive, universal, mandatory, standardized content for all elementary school kids in Ontario,” she said, adding that the positive result from the ETFO decision was that trans youth have a right to see themselves in the curriculum.

“But is that enough for inclusion?” she asked.

Luey noted that “it’s not full inclusion” if the expectation is that an elementary school child knows their identity, has the language to express it and feels safe enough at home and at school to express their needs.

“The other part is that every student in Ontario needs rights respecting LGBTQ inclusive information in order for every LGBTQ student to feel safe,” she said.

“You can imagine a situation where you have a young person who has all of those things in their life to be able to speak up and request an inclusive curriculum, and their class with Mr. Smith might be great. They might be getting what they need, they might be feeling included and safe in class, but then they go outside at recess and Mr. Wilson’s class doesn’t have that information. Those are still their peers,” she explained, stressing that it’s also “not okay to expect that a child should know that they are in an education system … where they’re not getting mandatory, inclusive and positive information.”

Sparrow explained that, to him, the “key aspects of inclusion are just being tolerant, being accepting and being open.”

“As long as you, even in little ways, like through speaking in a classroom, if you sort of give off that idea of being open, or if you straight-up say that you’re accepting … that goes a long way,” he said.

Wah noted that the “Trans Legal Needs Assessment Ontario” found that discrimination was the most prevalent legal problem for people in the trans community.

“Forty-three per cent of respondents experienced discrimination versus 5.3 per cent of the general adult Canadian population,” she explained, asking the counsel on the panel to provide practice tips for advocating for trans youth.

Luey, speaking broadly of her work representing trans youth, advised lawyers to remember their client is an individual.

“Don’t assume that their needs are the same as the other kid you’ve represented at youth court because they are trans; they’re an individual,” she said, noting that the work should come from “a trauma informed place.”

“For us at Justice for Children and Youth, a big part of what we do is making sure that young person has access to the services and supports they need in the rest of their life to allow us to focus on helping them with their legal issue,” she explained, adding her final piece of advice is to listen.

“We recognize that trans youth are, [often] times, vulnerable, at least the ones that are often coming to our clinic. So, they need extra care, but that doesn’t mean that they need to be shielded in the same way for each person. So, listen to what they want, what they need and go from there,” she suggested.

McCann added that when it comes to setting a priority for test case litigation, it’s not for him, the lawyer, to decide.

“That’s for the trans community and the trans youth to decide: what are the next issues that we need to tackle,” he said.