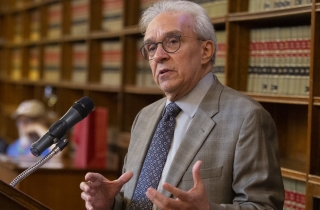 LaForme, the first Indigenous person to sit on an appellate court in Canada, was appointed to the Ontario Court of Appeal in 2004. He is well known for his decision in Halpern v. Canada (Attorney General) [2002] O.J. No. 2714, which was written during his time at the divisional court. The decision, which was upheld on appeal, determined that denying gays and lesbians the freedom to marry each other was unconstitutional.

In Halpern, LaForme wrote that “there is absolutely no reason why the rights infringements that are in issue — and that have historically persisted for gays and lesbians — should continue any longer.”

“On this point I can say it no better than by echoing and adopting the profound and famous words of Martin Luther King Jr., who in 1963 wrote from the jail cell he then occupied: We must use time creatively, in the knowledge that the time is always ripe to do right. … Now is the time to lift our national policy from the quicksand of injustice to the solid rock of human dignity,” he added.

Upon accepting the Ally Award, LaForme said the honour “absolutely” took his “breath away.”

“I really don’t have the words to express how special this award means to me,” he said, noting that the Halpern decision “is one of those moments in your life that you can’t ever get away from, or even want to.”

Although the former judge was “humbled” by the award, he said he was also “saddened” because while he loves the idea of this award and what it represents, he also felt “like there should be no need to get awards like this.”

“When I learned about this award, I began to wonder: what is an ally?” he asked, noting that the Dufferin Diversity Network, leveraging the work of author Anne Bishop, tries to answer this question, which he would go on to paraphrase.

“An ally is someone who is not only committed to social equality, but someone who is willing to do the work of social justice from an informed position. People as allies work to support diverse groups in our community with which they may not necessarily identify as members,” LaForme explained, adding that allies “include those who recognize the honour and privilege they receive from society’s pattern of injustice and take responsibility for changing these patterns.”

“Part of becoming an ally is also recognizing one’s own experience of oppression and from that, learning how to respect the marginalization and helplessness faced by others. And as an Indigenous person, you can imagine what was going through my mind when I was listening to the arguments that were presented in Halpern and how similar they were to the way I felt and my life, and the life of my family,” he noted.

LaForme noted that allies also “recognize that personal is political.”

“Allies recognize that all of our choices either work to support social justice or to detract from social justice,” and that once that consciousness is recognized and started, “it demands effort,” he added.

During the litigation of Halpern, LaForme recalled that “much of the public discourse was ugly and personally painful.” He said the language of hate attacked the “2SLGBTQ community.”

LaForme said that in life there are moments that “that morally define us and fundamentally challenge us” and the Halpern case was one of those moments for him.

“I was determined to write my own decision and finish it first to circulate it to my colleagues for them to consider, and respond to, and that’s what I did. I didn’t want to have to respond to somebody else’s thoughts,” he explained, adding that he was “determined” that his views and how much he cared about the case would be known.

“I was equally committed to showing Canadians who I was as a judge and what values I brought to my office,” he noted.

“I firmly believe that Canadians have a right to know who their judges are,” he said, adding that the diversity of a court is important because “who we are, and our experiences in life, frame our decision making.”

LaForme explained that the Halpern decision “showed the world what we were about and what Canada was about,” adding that he only played a “small part” in the LGBTQ+ community’s struggle.

He then recounted a story about a time when he visited Seattle with his family. It was after the Halpern decision had been released and the city was in the midst of celebrating Pride. He met some civil rights lawyers advocating for “2SLGBTQ rights throughout the United States” and when they discovered who he was “they went nuts.” They knew about the decision, and his role, and they invited him to co-marshal the Pride parade. LaForme had to decline as he wouldn’t be in town at the time, but looking back he thought to himself “why couldn’t we have stayed another day?”

LaForme concluded his remarks by noting that he once delivered a keynote address at the Law Society of Ontario with two points in it that he believed are “important, and perhaps even more important today.”

“The first was this; at that time the law society’s motto was ‘let right prevail.’ And I observed at the time how fitting it was that we celebrated the achievement of equality, a fundamental right, in such a place. The second thing was that I issued a caution, and that was that the achievement of rights is never easy, but you cannot rest on your laurels because once the right is achieved the battle to safeguard, maintain and build on that right just begins,” he said.

“To quote from Professor Mad-Eye Moody in the Harry Potter series: ‘constant vigilance,’ ” he said, adding that “we must be vigilant to protect our rights and be vigilant in the profession for the rights of others from communities we may not identify with.”

LaForme said he believes the law society’s motto continues to be “let right prevail,” but that he is “troubled by some of the discourse arising out of the recent bencher election and that appears to continue [to] be coming from some areas of this governing body.”

He noted that following the Halpern decision his parents acted as apologists for him, which indicated the “damaging impact of colonialism on my Anishinaabe Christian parents.”

“My devout Christian mother-in-law, on the other hand, called me up after the decision and lit into me for not going far enough. ‘You should have ordered those churches to marry them!’ And her plaintive cry as a woman [was], ‘I am sick to death of my equality rights being trumped by freedom of religion, or freedom of conscience, and freedom of expression of men.’ She all but spat that [last] word out. Now I share this story with you in this place where right must prevail while I wonder if the strong feelings on the Statement of Principles are truly grounded in the Constitution, or if these feelings come, wrapped in Charter principles, from a darker place,” he said.

“I hope not,” he added, “and if they truly come from a place of principle then those responsible for the quality of this very public discourse should be mindful of what Confucius instructed us and that is: ‘when anger rises, think of the consequences.’ ”

“I am Anishinaabe,” he added, noting that “I am who I am, and where I am,” because of the people who came before, walk behind, and who come ahead.

“You, your community,” he told the LGBTQ+ attendees, “has always walked with me. Many of my achievements are yours too. My time as the only Indigenous man on the Court of Appeal in Canada was a lonely time, but all of you were my allies throughout. You helped me lessen that loneliness and truly helped me be the best that I could be. I am forever in your debt. I am proud of you and you too must be part of yourselves. Chi-miigwech to you, Chi-miigwech CBA for this tremendous honour, happy Pride.”