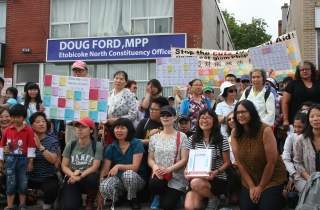 Ontario’s new attorney general must “stand up” to Premier Doug Ford and recommend that cuts to legal aid in the province be reversed, says an organizer of a recent protest by clinics serving racialized communities.

The July 30 demonstration outside Ford’s Toronto-area constituency office, was one of many as of late to protest a massive funding cut to Legal Aid Ontario (LAO) as part of cost-saving measures by the Progressive Conservatives.

As a result, LAO is slashing $14 million to its 73 clinics throughout the province.

It was 11 a.m. that around 100 demonstrators spilled out of two school buses outside Ford’s Albion Rd. office in Etobicoke as part of Ride for Justice, an outcry organized by a handful of clinics, including the Chinese and Southeast Asian Legal Clinic (CSALC) and the Black Legal Action Centre (BLAC).


As soon as the buses came to a stop, a Ford staffer working the front desk slung a satchel over his shoulder and disappeared into the inner office, closing an inside door behind him.

The office remained locked. Another staffer emerged from the rear of the building and accepted a petition from organizers but would not comment.

“We do have a new attorney general, and I think that the new AG is more familiar with the needs of Ontario because he actually [practised] in Ontario, and he also has a history of community service,” said Go. “So, I’m hoping that the new AG will be able to stand up to the premier and tell him to rethink the whole strategy.”

According to a bio page on his firm’s website, Downey has received the Order of Orillia for “significant lifetime community service” and the Queen’s Diamond Jubilee Medal for volunteer work.

Earlier in July, CSALC filed a formal appeal to the Ford government to stop the legal aid cuts.

During the July 30 demonstration, Go said that because the CSALC will not be receiving help with a pending rent increase, it will have to move to cheaper digs. As well, at least one staffer may still have to be laid off and the clinic will explore renting out space from wherever it lands in a bid to make ends meet.

Liu Jui Xiang, 69, has been staying in Canada on a visitor’s visa. Needing to remain longer in order to help her daughter raise a young child, Xiang has been receiving help from the CSALC in a bid to extend her visa.

“She didn’t want to stay permanently, but because her family situation changed, that is why she had to stay here,” said community legal worker Jenny Shen, who interpreted for Xiang. “She has to take care of her family members in Canada. … They need their help. Her grandchild is 6 years old, and she has been taking care of her grandchild since he was born.”

Xiang is now worried the legal help she has been receiving will dry up.


Ruth Goba, executive director of BLAC, said that her clinic, which opened its doors in March, has taken in around 300 calls from people seeking help.

“We are able to provide … a service to low- and no-income black people across the province who would otherwise not have access to a lawyer,” said Goba. “Typically, someone who is dealing with an immigration issue that is related to anti-black racism would be able to call us and we would be able to provide assistance, possibly go to a hearing. We can no longer do that as a result of these cuts.”

Goba said plans have been in the works at BLAC to expand the clinic’s services to Hamilton, Ottawa and Windsor.

The cuts, however, will make travel difficult.

A spokesperson for Downey said Ontario’s government is “working” with those in legal aid to fix a “decades old” system and ensure “every available dollar is dedicated to front-line services.”

“We are working with partners in Ontario’s legal aid system to protect what matters most by ensuring that in Ontario’s dire fiscal situation, every available dollar is dedicated to front-line services,” Jenessa Crognali told The Lawyer’s Daily. “We need lawyers and other legal service providers, including legal clinics, to work with our government to build a sustainable, client-focused legal aid system for the future of our province.”