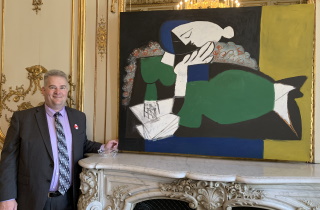 Next week bar association presidents from Canada and the other G7 nations will jointly urge their countries’ political leaders to legally protect lawyers and the confidentiality of the lawyer-client relationship, as well as to ensure that the emerging use of artificial intelligence (AI) and algorithms in legal decision making doesn’t harm human dignity, fundamental rights and access to justice.

Canadian Bar Association president Ray Adlington, and his G7 bar association counterparts, met July 11 and 12 in Paris, where they finalized more than a dozen joint recommendations that the group will present to G7 host, French president Emmanuel Macron, Aug. 23, just before the resolutions are delivered to all the G7 political leaders at their summit in Biarritz, France Aug. 24-25.

Adlington, who has spent his year as CBA president promoting diversity and inclusivity within the legal profession as well as pressuring governments to preserve and boost legal aid, said the bar groups from Canada, France, Germany, Italy, Japan, the United Kingdom and the United States are trying to drive progress in many areas of mutual concern.

“We were focused on everything from equality to the death penalty,” he explained. “Many of [the issues] are common — from the issues around equality leading to populism issues in many of our G7 countries, and I don’t think that we in Canada are immune from that; to issues around the role that artificial intelligence and technologies will play in access to justice; legal aid … is [another] common issue across our countries … ; protection of the environment; strengthening responsible business conduct; [and] preserving the rule of law and the right to a fair trial.”


One of the bar groups’ resolutions asks G7 political leaders to demand, and work for, the immediate release and unconditional formal pardon of internationally renowned Iranian human rights advocate Nasrin Sotoudeh, who was sentenced last March and faces decades in prison and 148 lashes “for carrying out her professional duties as a lawyer and her work to defend fundamental rights, especially women’s rights.”

Under the rubric of preserving the rule of law and the right to a fair trial, the bar leaders are urging the G7 countries to enshrine “protection of lawyers in the performance of their duties.”

They also ask states to ensure that all people are equal before the law, and to enshrine (as Canada already has) the right to legal counsel, the right to a fair trial and the confidentiality of the lawyer-client relationship.

The G7 bar leaders also urged their governments to raise awareness among states, and international organizations and actors, “about the importance of an effective protection for lawyers,” and to support and promote state support of the “Day of the Endangered Lawyer.” (The 10th annual event is slated for Jan. 24, 2020, when the focus will be on Pakistan, where lawyers have been targets of mass terrorism, murder, attempted murder, assaults, death threats, contempt proceedings, harassment and intimidation for the execution of their professional duties. Lawyers have also been arrested, detained or tortured, and their family members murdered.)

In aid of fighting against inequalities and promoting access to justice, the G7 bar association presidents are asking their governments to support activities that promote awareness of the justice system and rule of law from an early age by organizing awareness days in schools with lawyers, judges and other members of the legal profession explaining the importance of the rule of law, and presenting the role of the legal profession in so doing and promoting access to justice.

In addition, they are pressing to have states including legal aid “by independent lawyers” as part of humanitarian aid.

In addition they are asking G7 governments to promote gender and other equality in society and in the workplace, including the legal profession, by addressing bias, the gender pay gap and other pay discrimination, bullying and sexual harassment, in collaboration with legal professional bodies, and the relevant state authorities and civil society organizations.


“President Macron has spoken openly about his desire to make equality, particularly gender equality, as his priority during France’s G7 presidency,” Adlington said.

The resolution on equality is a top priority for the CBA, he said. “In this globalized era, we would like to see a cohesive approach to the issue of equality emerging from the summit,” Adlington explained. “The current climate of inequality is harming each of our societies by fracturing trust and undermining confidence in the rule of law, the essential premise of which is equality. Working together across the G7 countries using common parlance in common reporting mechanisms towards common objectives will help businesses that operate in multiple jurisdictions comply more easily, facilitate future study and inspire confidence that real action is being taken.”

He said the French president has invited Parisian lawyer (and Quebec bar member) Christiane Féral-Schuhl, president of the French National Bar Council, to meet with Macron and the G7 Task Force Aug. 23 to discuss the presentation of the bars’ resolutions to the G7 political leaders.

In the fast-growing area of digitalization and AI, the bar associations are asking their respective states to ensure that court decisions are not based entirely on AI or algorithms, as well as to “guarantee that access to justice, the right to legal counsel, and the independence of the legal profession, including the judiciary, are not prejudiced by the process of digitalization and the introduction of emerging technologies in the practice of law.”

To those ends, the bar associations are recommending their governments to work in partnership with legal professional bodies, universities and other stakeholders in the justice system “to establish an independent mechanism to fully assess and monitor the impact of technologies, specifically the use of algorithms in the judicial system.”

That includes increasing funding for public bodies to understand the appropriateness of algorithmic systems, “and where appropriate, how to deploy them responsibly and with respect to fundamental rights and freedoms. This includes the obligation to ensure that the dignity of the human person is safeguarded whenever AI or algorithms are being used.”

In order to reduce the risk of biases in AI products, bar leaders also stress the importance of states promoting the participation of more women and minorities in science, technology and engineering and in the design, development and deployment of algorithms.

As well they recommend that the G7 countries combat hate speech and violent content on the Internet “by means of a harmonized framework that respects human rights and fundamental freedoms and adopt proportionate and effective instruments.”