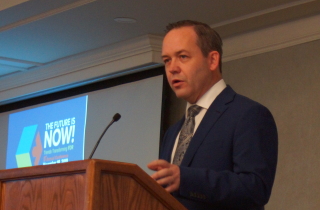 Downey, the keynote speaker at the conference held in Toronto on Nov. 18, said the Ministry of the Attorney General is reviewing the federal amendments to the Divorce Act to “determine how changes will impact our family justice system, Ontario’s system.”

“The goal is to avoid confusion as a result of different language being used. We want to make sure the language is right,” he said, noting that the Ministry will be “exploring replacement of terminology in the Children’s Law Reform Act related to custody and access with terminology related to parenting.”

“It’s a nuance, but it’s an important nuance,” he stressed, adding that the government is aware that it needs to make these amendments “before the federal changes come into force in July.”

Another change coming down the pipe at the same time as the Divorce Act, he said, are the issues with “various appeal routes in family courts.”

“The different routes of appeal in each court cause confusion and inequity in some cases. Some common sense proposals that we’re exploring are eliminating the second appeal as of right from Ontario Court of Justice family law cases. We’re also looking at simplifying the appeal routes in the UFC cases,” he said, noting that the Ministry has consulted with the chief justices of each of court on this topic.

“We’d likely look to make changes to the appeal routes at the same time as address the changes in the Divorce Act,” he explained.

Downey said he’s also aware of the need for a provincewide expansion of the Unified Family Court. He noted that challenges with expansion can include capital, space, it being cost prohibitive, as well as operational issues. However, he explained the UFC is one of his top priorities.

“I had a conversation with Chief Justice [Geoffrey] Morawetz and Chief Justice [Lise] Maisonneuve and we’re all on the same page; we think it’s a great idea,” he said of the UFC expansion.

“We just have to figure out how, and what, and when. We have 25 courts now. The Unified Family Court creates a better experience for the person entering the system, [it’s] a little less confusing, it just makes sense. We need to move in that direction,” he added, noting it’ll be part of the first conversation he has with the Attorney General of Canada, David Lametti.

Downey also addressed changes to LAO’s duty counsel, which were made over the summer and included family law duty counsel assisting clients with “some aspects of Motions to Change.” He said that LAO and the Ministry held separate consultations and based on feedback “change needed to happen.”

“As of today, this is becoming public as I say it, legal aid duty counsel will provide procedural advice to anyone who [is] appearing without their own lawyer in first appearance court or first case conference, [provide] assistance with child protection matters for financially eligible clients in jurisdictions where clients are unable to retain a lawyer in a timely manner, assistance with consent as long as negotiations have been completed, [and] assistance with second case conference for those who financially qualify for legal aid and the issues are eligible for counsel services,” he said.

“Legal Aid Ontario has assured me that it will continue to monitor the duty counsel capacity and add services if and where possible,” he added, encouraging the family bar to continue to give feedback.

The attorney general also noted that the court system is “outdated” and that simplifying processes requires consultation. He explained that his parliamentary assistant, Lindsey Park, has been involved with consultations since the previous Attorney General, Caroline Mulroney, was in place. He said Park has been compiling a report regarding civil and family rules reform, which he’ll use to help make changes.

“The system has not kept up with modern reality and it needs a bit of repair,” he added.

“As a government we’re aware that the system needs some reform, that’s why we’ve been reaching out and that’s why I can tell you we’re committed to creating a justice system that is faster and easier for people,” he said, stressing the need for simpler processes due to the large amount of self-represented litigants.

Downey explained that more online processes will help in this regard, such as the Family Claims Online Portal, which allows for “joint filing of simple divorces.”

“We can electronically file custody access at court, property claims on consent and you don’t have to travel to the courthouse to do it. That’s the direction we need to move, so people can do their business without being further traumatized by the bureaucracy of the system,” he stressed, also noting the need for simplified language to make processes “public facing.”

LexisNexis Canada, publisher of The Lawyer’s Daily, was a sponsor of the fifth annual Family Dispute Resolution Institute of Ontario Conference.