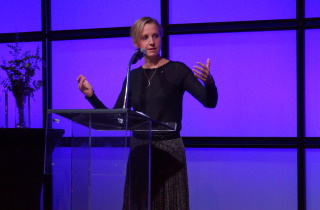 The South Asian Bar Association (SABA) of Toronto’s Gala was an evening of celebration for award winners and of inspiration with guest speakers Justice Mahmud Jamal, of the Ontario Court of Appeal, and Dr. Samantha Nutt, founder of War Child Canada, reinforcing the gala’s theme: “justice starts here.”

In his remarks, Justice Jamal imparted five points he’s “picked up along the way” in his career.

First, he noted that at key moments in his career he’s “found it very helpful, and indeed indispensable, to seek out the advice of others,” stressing that mentorship has made a huge difference to him.

“I’ve found that senior members of the bar are generally very happy, and often flattered, to share their experiences, especially when they think they might be able to help other people. I’ve never personally been shy about seeking advice, and I think you shouldn’t be shy either. Without exception it’s always helped me,” he said.

His second point was that throughout his career’s ups and downs he’s learned “the importance of embracing failure.” He noted that he defines failure “broadly and, admittedly, subjectively.”

“Turns out that I’ve had many, many opportunities to embrace failure over the course of my career. I’ve learned not to take failure personally, but rather to try and put it to good use. As we all know, and we all experience on a daily basis, this can be a very tough profession and everybody, without exception, experiences some form of failure at some point,” he said, adding that lawyers have to take failure in stride and keep moving forward.

“I’ve always considered the advice of novelist, Saul Bellow, who, to paraphrase, wrote that a first-class individual subsists on the matter that they destroy, just as the stars do. And Bellow’s advice was to convert our failures into burnable energy to propel us forward. As I said, I’ve had an abundance of failures converted to burnable energy,” he explained.

Justice Jamal recalled that when he applied for his first job in the law, he wrote to over 100 law firms and received “almost as many rejection letters.” He was also rejected twice by the firm where he would ultimately spend his career and rise to become a senior litigation partner, he added, stressing the need to embrace failure.

“My third point is that I’ve learned no matter how good a technical lawyer you might be, or think you might be, it’s absolutely critical to get involved in the legal profession and the broader community,” he said, noting that lawyers are “particularly prone to cabin fever contracted by being stuck in the office for long periods of time.”

His fourth point related to the third, in that lawyers should “remember the importance of giving back.”

“We have to remember we’re all so very fortunate to be members of the legal profession. Compared to most ordinary Canadians we have infinite possibilities, and, in my view, we have a duty to give back to the extent we can,” he said, stressing that there are so many people that need legal help.

“Let me give you one tiny example,” he added, “every week at the Court of Appeal, we hear motions at which one or more litigant is unrepresented. We’re very lucky that sometimes we have duty counsel that come to help as friends of the court. This really doesn’t take a lot of time, but it can make an enormous difference, both to the litigants and to the court.”

From what he’s seen in his limited time on the bench, he noted, acting as duty counsel will also “make you a much better lawyer and enhance your reputation amongst the judiciary.”

In closing, he said everyone should remind themselves to “enjoy the journey.”

“I know a great many of you sacrificed greatly to become lawyers, or others close to you have done the same. Many of you are living, not only your own dreams, but also the dreams of others who have helped you along the way. I strongly believe that we owe it to ourselves, and also to our benefactors, to pursue our calling as lawyers with the passionate belief that this great profession deserves,” he concluded.

Nutt followed up on the theme of giving back by explaining the work she’s done as a medical professional in areas affected by war, such as Somalia, Afghanistan and the Democratic Republic of the Congo. Her keynote address focused on the horrors of war and the violence often perpetrated against women and girls.

She explained that War Child is making strides in creating access to justice in places where people have little recourse. The organization is a registered law firm in Afghanistan and Uganda, where it helps women and children survivors of sexual and gender-based violence.

Nutt stressed that the organization’s access to justice work is the “most critical and often the missing piece.”

“Unless you have the rule of law, unless you have some basic mechanisms of accountability, then you really have nothing at all because the cycle just continues,” she explained.

Nutt acknowledged that Canada’s court systems “aren’t perfect” and that access to justice is also limited here for people who are “poor, from a First Nations community or a racialized minority.”

“But as flawed as our own processes are,” she said, “those processes are still our best defence against tyranny and abuse the world over.”

“There are international laws and mechanisms in place to safeguard children’s rights in all contexts, even in the world’s war zones, and these must be strengthened. And it is within our power to help make that happen,” she added.

Nutt believes that the world “really does need more lawyers because in fragile environments, it’s only by creating access to justice that we will move beyond the status quo.”

“Over the next two decades I firmly believe that the rule of law and access to justice can and should be the next iteration of the humanitarian movement throughout the world,” she explained, encouraging attendees to lend their support.

The night was also about honouring SABA’s award winners: Ranjan Agarwal, for the President’s Award; Natasha Bakht, for the Legal Excellence Award; and Ritu Bhasin, for the Diversity Award.

Agarwal is a partner at Bennet Jones LLP and is a past president of SABA. Upon accepting his award, he stressed the importance of mentorship and getting involved in the profession, echoing comments made by speakers before him.

Bakht is an associate professor of law at the University of Ottawa, where her scholarship explores the “intersection between religious freedom and women’s equality.” During her speech she cautioned against the use of the notwithstanding clause and urged attendees to champion rights protected by the Charter.

Bhasin is the president of her own consulting firm, Bhasin Consulting Inc., and is an “award winning speaker, author and globally recognized expert in diversity and inclusion.” She strongly urged everyone to “fight oppression” and stand up against racism within their own community.

The SABA Gala was hosted at the Liberty Grand in Toronto on Nov. 27.