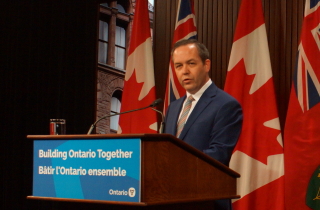 Bill 161, the Smarter and Stronger Justice Act, introduced by Attorney General Doug Downey on Dec. 9, proposes amendments to over 20 Acts and, if passed, will impact the legal regulator, Legal Aid Ontario (LAO), class actions and how lawyers practise in different areas across the province.

Some of the proposed changes include: “increasing the maximum fine for lawyers and paralegals who engage in professional misconduct and stopping the practice of government footing the bill for legal fees incurred by judges and justices of the peace who are dismissed due to misconduct”; allowing for the “online verification of identity and legal documents for transactions such as real estate agreements”; “ensuring class counsels’ fees are fair and reasonable, and allowing the court to withhold a portion of the fees until the court can review how class members were compensated”; and giving LAO more “authority to make rules about operational matters which currently must go through lengthy government approval processes.”

In an interview with The Lawyer’s Daily, Downey said the amendments will impact lawyers in various ways. When it comes to the Legal Aid Services Act reforms, he said it will be impactful in “terms of the services that they deliver.”

“Class actions are something the lawyers will have an opinion on,” he said, adding that his team consulted on the changes widely.

“We built it [proposed amendments] on the Law Commission of Ontario’s report from last year. We adopted large parts of their recommendations. … I think lawyers will care about that,” he added.

“In terms of some of the other [changes], there’s a commissioning and notarizing change that we’re going to pave the pathway to allow for electronic commissioning and notarizing. And this is something that’s being done in almost half the U.S. states. So, once we build the safeguards in, that’ll change how some lawyers practise law. It could be everything from signing an affidavit to court documents, transferring assets, properties electronically,” he explained.

Other changes that will impact the legal community are amendments to the Law Society Act.

Law Society of Ontario (LSO) treasurer Malcolm Mercer said that he’s pleased with the amendments to the Act, “all of which provide greater public protection.”

He noted that the amendments give the law society’s governing board “the authority to make bylaws setting out the requirements for firm regulation.”

“Firm regulation will provide enhanced public protection by setting out a firm’s role in ensuring ethical, professional conduct. Clients have relationships with firms as well as the individuals within the firms. Through their policies, procedures and organizations, firms as a whole have an impact on client representation and on the administration of justice,” he said.

Mercer explained that firm regulation allows firms to “be advised of, and to address, regulatory complaints made by individuals within those firms.” He noted that firm regulation is consistent with the legislative frameworks of other Canadian law societies, “thereby promoting national harmonization,” and that it is intended “to be a positive for firms.”

“We recognize that many professional decisions that were once made by an individual lawyer or paralegal are increasingly determined by firm policies and procedures. The new provisions will enable the law society to distinguish between types of firms and treat them differently, in recognition of the fact that one size does not fit all, in a way that recognizes the realities of sole and small practice. These important amendments will permit the law society to move ahead in consultation with stakeholders to implement reform,” he added.

Mercer also welcomed the amendments to s. 49.12 of the Act regarding disclosure of information.

“This change will provide greater clarity regarding the law society’s abilities to disclose information about complaints and investigations, where appropriate, and enhance its ability to be more transparent and accountable. These amendments strengthen the law society’s disclosure policy framework and relate to specific information about audits, investigation, reviews, searches, seizures and proceedings, or potential audits,” he said, noting that the amendments also allow for enhanced information sharing with other Canadian law societies.

“Ontario lawyers may practise in many jurisdictions and so it’s important that information about Ontario lawyers can be shared with regulators in other jurisdictions. Further disclosure procedures will be implemented through policy development, consultation and subsequent bylaw amendments,” he added.

The treasurer also applauded changes to the Notaries Act, which will allow paralegals to be appointed as notaries, as well as the changes to the Legal Aid Services Act, which he said include “regard for the foundational role of private practitioners in providing services in the area of criminal, family and child protection law.”

Downey stressed the need for modernization of the Legal Aid Services Act, which hasn’t been changed since 1998.

Charles Harnick, a former AG involved with LAO, said a “careful and open-minded review of the Act was long overdue.” He said the proposed amendments “will empower Legal Aid Ontario to be more responsive to client needs, to innovate and explore new and better ways to deliver services.”

“The new Act will also give Legal Aid Ontario more operational independence, granting us the authority to change policies and regulations that no longer serve clients or taxpayers as well,” he stressed.

Despite introducing changes to legal aid, the government is maintaining current funding levels for the organization into 2020-2021.

Although current funding will remain the same, the Ontario Bar Association (OBA) has applauded the attorney general for not imposing legal aid funding reductions that were initially forecast in the 2019 budget.

“This responds to our urgent request and recognizes the importance of investments in the sector and the critical role lawyers play in providing access to justice. The amendments proposed today to the Legal Aid [Services] Act entrust significant responsibilities to Legal Aid Ontario, whose ability to carry those out effectively will depend upon a willingness to continue working with our members who deliver services on the front lines and upon adequate funding,” said OBA president Colin Stevenson, in a statement.

In speaking with The Lawyer’s Daily, Downey noted that a couple of his experiences working in the legal profession informed the changes being introduced in the bill.

He said that the portion regarding jury reform and making the addresses of jurors not available unless they’re requested by motion, was inspired by his work as a court registrar.

“I don’t think in this day of privacy that addresses need to be out there,” he said, adding that portions of the bill regarding estates reform comes from his time in practice.

The proposed reform will simplify the estate process for estates of $50,000 or less.

“We’d sometimes get a client where really all they needed to do was transfer one asset, [that was] $40,000, and they couldn’t get it transferred without going through probate. And that’s just not practical,” he explained.

Looking ahead, Downey would like to see modernization efforts increase. For example, he said currently 56 per cent of bail and remands are being heard by video, but he’d like to see that go up to 90 per cent.

“We’re modernizing the system and we’re giving the legal system the tools it needs to operate more efficiently,” he said, adding that he wants the legal community to know that this work is focused on modernization and if lawyers have ideas, he wants to hear from them.