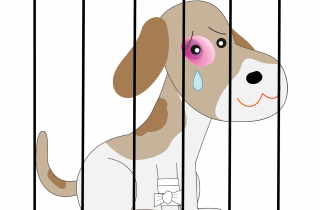 Animal law was poised to finally have its day in Canada’s top court in 2020, but it was not to be. In January 2020, I was guest lecturing on animal law at law schools in Asia and Europe when I heard the jarring news that Punky Santics, Canada’s everydog on death row, had just his case dismissed by the Supreme Court of Canada.

Unlike a dismissal in corporate litigation, a dismissal in this major animal law case meant that Punky would be destroyed. It was a very deflating day for Susan and Punky Santics and for animal law globally. As soon as the news hit the media, I was swamped with offers from Brazil to Kelowna from thoughtful individuals and animal groups willing to take Punky to their dog sanctuary, to rehome him, anything to keep him alive.

For more background on this groundbreaking animal law case, please see earlier articles I wrote about my team and I, Team Punky, working hard to try to get this case about a “dangerous dog” heard at the Supreme Court of Canada. As counsel in this case, we understood that the vast majority of matters do not get leave to the SCC but we believed that this animal law case with its cogent legal arguments had a viable chance.

I wrote several earlier articles about Punky Santics and his unprecedented case: Getting Punky off death row; How Punky the dog got to Supreme Court; and Why death row dog Punky should head to Supreme Court.

It’s been a long road for Susan and Punky Santics since 2017 when the incident in the off-leash dog park occurred.

Susan Santics went to trial where she was unrepresented against a senior prosecutor. She lost.

Santics has mental health challenges that made it very hard for her to argue her own case. She wanted to fight for her dog, to save him from death and she had every right to try.

Fortunately, Santics was able to secure lawyer David Wu and eventually she had a team of lawyers trying to help her through her various appeals. Amber Prince and I, co-adjunct professors of animal law at UBC’s Peter Allard School of Law, stepped in during the appeal. We were later joined by Erin Reimer and Moira Dillon. We also had help from lawyer Dan Fogarty and articling student Jordan Ardanaz. We acted pro bono for Santics who otherwise could not have afforded to fight for the life of her companion. This was very much about access to justice for animals.

And Punky’s appeal wasn’t all bleak. On Aug. 23, 2019, we had a momentous and gratifying win in the B.C. Court of Appeal on the very day Punky was scheduled to be destroyed. The Court of Appeal stated at para. 31, “While in my view the prospects of the applicant obtaining leave to appeal the unanimous judgment of this Court are slim, they are not negligible. I will grant a stay on terms” (Santics v. Vancouver (City) Animal Control Officer [2019] B.C.J. No. 2155).

The court allowed Punky to live while we filed an application to the SCC. On Sept. 23, we filed Punky’s case at Canada’s top court, arguing that this animal case was of national importance, and how it is imperative for animals and humans to have access to justice.

Our appeal addressed the importance of provincial courts’ jurisdictional powers to order conditional orders as well as to request clarity for the appropriate test in animal destruction cases. At the heart of this animal law case were core principles of justice, animal welfare, the power of the state and the struggle for animals to be more than property in the eyes of the law.

It is not too dramatic to say that we still have the death penalty for dogs in Canada.

In this animal law case, whether or not the law applies a property analysis for animals or regards them as sentient beings, Susan Santics’ unique companion Punky, her “property,” was destroyed.

In my view, a property analysis of animals is antiquated, as is the death penalty for dogs.

Property is replaceable, unlike a treasured animal. There are many alternatives to the death penalty like retraining, rehoming. We will continue to work on change and improving the lives of animals, one case at a time.

In Canada, animal law cases normally do not go beyond the trial level. This groundbreaking case was a legal first and will remain precedent-setting because an animal law case like this, a “dangerous” dog case, as far as I know, had never before been filed at the Supreme Court of Canada in the long history of the august court.

I can say without a doubt and based on my long-term 20-plus years practice as an animal law lawyer and educator in Vancouver that Punky’s case has made a lasting impact in the animal law field. Punky Santics will be remembered as Canada’s everydog.

Punky’s struggle through the justice system stands for how animals access courts, justice and the pressing need to value every single animal life and the right to fight for their protection. The equation should be about balance.

How can we be more responsive to animals and manage public safety at the same time? Both are important. Punky’s case makes it clear that animals matter and they need and deserve access to justice.