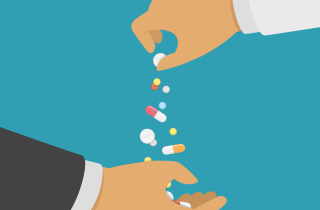 A cocaine dealer operating a non-essential business!? Ha! What a great joke to make amidst a pandemic. We all need a little levity, no?

I love how this April Fool’s joke legitimizes a cocaine delivery business as an actual business, but then says that it is not essential. It is really incredible the lengths that fake news will go to pull a prank.

I took a sip of my coffee, fully caffeinated (also once a drug that was feared) to stimulate my brain. And I thought for a moment. Quickly.

This is not a joke!

This is a real attempt to flex the new enforcement muscles of the pandemic police, under the Emergency Management and Civil Protection Act (EMCPA), which was invoked in mid-March to prevent the spread of the COVID-19 virus.

Failure to comply with an order given during a declared emergency

Allegedly, the Hamilton Police gave the cocaine salesman/delivery man a ticket pursuant to s. 7.0.11(1)(a) of the EMCPA with the following charge: “Failure to comply with an order given during a declared emergency.” The “order” was that he failed to shut down his business...selling/delivering cocaine.

Constable Stewart, Hamilton Police Media Relations Officer, said that drug dealing is not an essential service, and the man faces a $750 fine if found guilty on that charge. He actually said that.

The EMCPA says a court may give an individual a fine of up to $100,000. I tried to find out from Stewart where they came up with $750, but he did not answer my question.

Let’s think about this for a minute — is a cocaine dealer’s business really non-essential? In the time of pandemic, aren’t all vices essential: tobacco, alcohol,cannabis, sex, PlayStation…?

But a cocaine delivery man? Is he endangering the public? There’s the cocaine part (illegal but arguably essential) and then there’s the delivery part. Is a delivery business non-essential? Wouldn't cocaine delivery be the same as candy delivery?Of course, it's not, but you know what I mean — delivering anything during the pandemic could be considered essential.

(Actually, cannabis was deemed non-essential last week, obviously a decision made by those who are not self-isolating with small children. Thanks Mr. Ford! The OCS (the government’s online cannabis store) was, however, strangely allowed to stay open, but no one else’s store could. Hmmm. But then - newsflash! — in a fast turnaround order, the government has now allowed licensed cannabis stores for the next 14 days to offer curb-side pickup and home delivery seven days a week, from 9:00 a.m. to 11:00 p.m. Third-party delivery services are not permitted, and retailers may charge for delivery. It’s hard to keep up with Ford’s flip-flops.)

As I took another sip of coffee, I thought about my weed dealer (OCS), my booze dealer (LCBO) and my cigarette dealer. Okay, I don’t smoke cigarettes, but if I did, I’d be entitled to continue damaging my lungs, lips and tongue under the 15-section EMCPA, because “convenience store” is listed as an essential business. And I began to wonder, what does “essential” really mean?

I was amazed to learn how many essential businesses there are, 74 categories in all. Take a look at Schedule 2: “Beer, wine and liquor stores and alcohol producers, and stores that sell beer and wine through arrangements with authorized providers; cannabis stores and cannabis producers” are number four on the list. Even lawyers are on the list — although way down at number 65, below waste disposal, forestry businesses and dry cleaners. There is no implied importance attributed to a number, but it is interesting to see that beer is 61 numbers more essential than lawyer. Many would argue that number 65 is still too high.

At number eight is “Business providing pharmaceuticals and pharmaceutical services, including pharmacies and dispensaries,” which makes sense to be essential. So why are non-prescription drugs any different? Aren’t all drugs, essentially, essential? People use drugs for a variety of reasons, but mostly to ease the symptoms of something, whether it is pain, disease, trauma or working from home.

People’s use of drugs does not harm anyone, except themselves. And while addiction to drugs is a nationwide illness, is the criminal justice system equipped to make this epidemic vanish? It has been trying for decades and failing for decades.

Perhaps this is a good time to revisit why we still have a Controlled Drugs and Substances Act at all, especially with the government’s current immense effort to protect the public. The criminalization of cannabis for 95 years did nothing but the opposite of its intended effect. It destroyed the public’s interest in the research and development of the plant and its ability to heal people, build houses, make clothing and a huge variety of other products.

All other non-prescription drugs could be treated with a health-care approach, instead of a criminal justice approach. Look at the recent attempts by Bruce Linton, the former CEO of Canopy Growth to legitimize and focus research efforts on hallucinogenic drugs’ effect on healing the brain with his new company and team at Mind Medicine. This is science and business at work, not drug-war rhetoric.

I finished my coffee, immediately craved more caffeine and recalled that it was not long ago that doctors used cocaine as a topical anesthetic and prescribed it as treatment for toothaches, depression, sinusitis, alcoholism and impotence. Of course, cocaine’s side effects caused many of the ailments it claimed to cure — causing lack of sleep, eating problems, depression and even hallucinations. But are side effects worthy of putting people in jail? Not anymore.

Essential or not, cocaine use is no joke, but it is even less funny when the police get involved. Liberal MP Nate Erskine-Smith introduced legislation last year to decriminalize all illicit drugs. In his opinion, possible criminal charges for drug possession prevent Canadians suffering with addiction from receiving the help they need. While legalizing cannabis was “about treating Canadians like responsible adults,” decriminalization is “about saving lives.”

The Hamilton Police may be on the leading edge of enforcement but charging a man who delivers cocaine to people who want/need it under the EMCPA is practically the same as charging a man who delivers candy to children. And now thanks to Hamilton’s finest, both are now bizarrely equated as “non-essential” businesses operating through delivery. Watch out Easter Bunny! The Hamilton Police may be looking for you!

Actually, no, the Easter Bunny is now safe, kids! Phew! He was declared an essential service earlier this week.

Russell Bennett is a cannabis lawyer in Toronto trying to survive the COVID-19 crisis and his family. His law firm, Cannabis Law, helps entrepreneurs and small to medium-sized businesses grow.