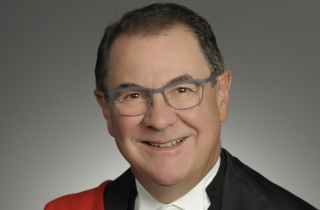 As the COVID-19 pandemic has turned society on its head, the Ontario Superior Court of Justice has been rapidly trying to adapt. Under the leadership of Chief Justice Geoffrey Morawetz, the court has adopted electronic filings and virtual hearings in an effort to continue current operations and with a plan to not go back to the status quo of a paper-based system.

“If there is one positive that is going to come out of this crisis [it] is that we have been forced, and the Ministry has been forced, to accelerate its plans on moving to electronic hearings and also electronic filings and we cannot go back,” Justice Morawetz explained, noting the need for a “full end-to-end electronic filing system” with e-filing available to the profession and e-document delivery for the judiciary.

In a virtual fireside chat with The Advocates’ Society’s president, Scott Maidment, held on April 6, Justice Morawetz told viewers that the impact of COVID-19 on the courts has “been a ride” and that the court is “never going to stop operating.”

“Certainly, I’ve been intrigued for a long time about the possibility of expanding remotely in the court. We generally do this by way of pilot project. This is no pilot project and we’re in a situation where we’re transitioning to a full remote operation,” he explained, noting the challenge of suspending in-court operations in March when the docket was already full.

The Chief Justice said the court has a dedicated group of over 300 judges and “endless numbers of court staff” who wanted to keep working despite the trying circumstances. However, it was “clearly necessary” for the court to “impress” upon the message it received from Public Health Ontario, from Premier Doug Ford and from Prime Minister Justin Trudeau: “Stay at home.”

As the court considered how it would continue operations remotely, the profession immediately offered solutions and provided help, Justice Morawetz said.

“The OBA [Ontario Bar Association] immediately came forward with 400 extra teleconference lines, the Court Services Division of the Ministry of the Attorney General provided additional lines. We began to investigate the possibility of using the Zoom platform,” he said, noting the court also received assistance from mediators and arbitrators, referrals to arbitration centres, and from The Advocates’ Society, which formed the E-Hearings Task Force.

The Chief Justice stressed that the court’s goals at the current time focus on “how to keep operating.”

“One of the first areas of concern was how do you communicate?” noted Justice Morawetz, adding that people often take for granted that cellphone and computer access is common for most groups.

However, he stressed, that’s not always the case.

“We were contacted immediately by family distress centres and they remarked upon the situation that not a lot of people who suffer the consequences of domestic violence have access to a cell phone. We had a contact in our office who knew somebody at Rogers and within a couple hours we had more than 200 cellphones donated to assist with that crisis. Actions like this make a difference and allow, certainly the most vulnerable people in our society, to have access to the court when they need it most,” he said, adding that in the area of criminal law the court took “steps to ensure that those who were in custody would have their matters at least heard in the best way possible through a judge acting remotely.”

This situation has demonstrated the need for additional electronic hearings, both teleconference and video, the Chief Justice explained.

“I’ve noted the challenges of getting the video lines into the correctional institutions, but I’m very pleased with the co-operative efforts of the two ministries and also the way in which our court has been communicating and co-operating with the Ontario Court of Justice,” he said, noting it is “absolutely essential” for the two courts to work together to make use of shared facilities and limited resources.

Justice Morawetz noted that not all judges or counsel are “familiar with the electronic world,” so the court has been looking for a user-friendly platform with “adequate security measures to ensure that the privacy of the proceedings is respected.” He stressed that the court is still “embracing” the open court principle, so also must ensure that the media and public have access to hearings.

Justice Morawetz also noted that the court needs the ability for “every judge to access the entire court file from wherever they are.”

“Technically it can be done and it’s time for Ontario to really push forward,” he added.

The Chief Justice said that, for the past couple of years, the court has been promoting the use of Court Call for scheduling unopposed and consent matters. However, he noted, the uptake has been “disappointing.”

“I think now is a time to take a second look at it, a third look, a fourth look, because what we’re trying to do is allocate the resources for in court hearings to the adjudication of disputes. If you’re just dealing with administrative aspects of the file, there’s no doubt that they can be done far more effectively and efficiently from your office,” he explained, adding that Court Call has been gaining “significant popularity” in other areas of the province, such as the northwest where people and courts can often be far apart.

The Chief Justice believes the use of Court Call can be a “great success” and that use of electronic hearings also needs to be expanded.

“It’s not ideal, and I’m sure we’re going to have many challenges in the days and weeks ahead in accommodating some of the electronic hearings, but the more complex ones we may find that we use the services of outside providers, such as [an] arbitration place or ADR [alternative dispute resolution] centre,” he said, stressing that it’s “absolutely critical” that the profession recognize that “right now there is no alternative, but to do a virtual hearing.”

The Chief Justice said the efforts of the bar working together during this time will be a part of the “real solution.”

He noted that currently the court has no access to paper files, so the profession will have to “co-operate with your friends on the other side to ensure that the court has the right record that it requires in front of it for everybody to do their jobs.” He explained that courtroom advocacy will never be replaced, but “for some of these other matters right now, let’s get with the electronic and virtual world.”

“The world of a paper-based system is not going to exist anymore. It’s going to put an increased premium on communication, an increased premium on co-operation and collectively, those involved in a matter, you’re going to have to put your heads together and say ‘how do we get from A to B?’ recognizing that there’s going to be extreme pressure put on you by your clients,” the Chief Justice stressed to the bar.

He urged advocates to resolve issues that would not determine the matter at a hearing.

“I don’t know how much patience anybody in the system is going to have with a motion for refusals on undertakings these days. That is one that at the best of times, some of the judges, it may not be their favourite day at the office, but in these times especially that type of dispute is going to have to be resolved by counsel between themselves,” he said.

The Chief Justice told Maidment that his greatest concern is ensuring there is a “functioning court system for the duration of this crisis.”

“We have to keep operating. I was concerned today, there was another article in the Globe and Mail and it centered around some of the difficulties some of the law firms are having, but there was a comment in there that the courts were closed. And let me be very clear, the Ontario Superior Court of Justice has never closed. March 17, effective that day, we suspended in-court operations, but made it very clear right from the get-go that the court was operating. It continues to operate, and it is never going to stop operating,” he said, stressing that people need to have the ability to be heard by the courts.

“In order to accomplish this, yes we will need the support of the bar, we’re going to require it at every step of the way,” he said, again emphasizing the need for “greater co-operation and communication between counsel” at this time.

“There’s going to be a back-up in the courts when we come out of this crisis and we’re going to have to rely on the bar to help solve the problems because we’re also going to have to be mindful about the stress and the burnout situation that’s going to be effecting people,” he said, adding that “this is a topsy-turvy situation.”

“Even during this interim period where we’re having a lot of electronic hearings, it cannot be lost that every individual, regardless of what place they are in the system, has personal situations that are very different. Childcare issues are very different and completely tuned upside down. You’ve got families where you have multiple people working in their own home, trying to carry on with matters. And the stress and strain cannot be overestimated, and I think it behooves all parties to keep their eye on that to make sure we’re not exposing people unnecessarily,” he explained.

The Chief Justice said that it is “incumbent upon everybody who is working in the system to continue working” and that the court “will continue to operate.”

Maidment concluded the fireside chat by noting that the court’s response “shows us that our oldest and most established institutions can adapt rapidly and meaningfully to the temporary world of physical distancing.”

“It is open to all of us to embrace novel responses to our present challenges while honouring our established principles of fairness, civility and justice. For a time, our familiar road to the courthouse is impassable, but as the Chief Justice has said, the courts are not closed. They’re working on clearing a new and temporary path to justice. It’s not a path we’ve walked before. It is not a path we will walk forever, but if we are to have justice in our time of struggle, it is a path we must all walk together,” he added.