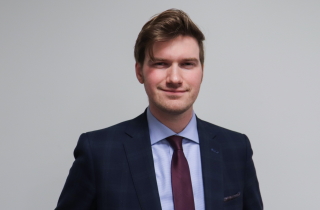 Kristopher Kinsinger, an articling student at Miller Thomson LLP, was supposed to attend his call to the bar ceremony in June, but then the COVID-19 pandemic happened.

Due to social distancing efforts to reduce spread of the virus, the Law Society of Ontario (LSO) announced on April 2 that the upcoming call to the bar ceremonies would be cancelled.

The regulator noted that an administrative call to the bar process “will be made available to candidates who have fulfilled licensing requirements so they may proceed with the next phase of their legal careers without delay” and that a “celebratory event” would take place at a later date for people who were affected by the cancelation.

Kinsinger was disappointed but thought the LSO’s decision was the right one to keep everyone safe. He was concerned, however, that there was no firm commitment by the law society to reschedule the ceremonies.

“The law society’s website had said something about rescheduled ceremonies, [the LSO] Twitter said something about a celebratory event, and that inconsistent language raised a few red flags. So, I started to reach out to some benchers that I’m acquainted with just to express my concerns and I was able to confirm off the record that they haven’t committed to rescheduling the ceremonies yet,” he said, noting he’s concerned that this situation will lead to the end of call to the bar ceremonies altogether.

Kinsinger said benchers encouraged him to rally support for the ceremonies to “demonstrate to Convocation that this is something that is valued [and] that we don’t want to see cancelled. We want to see it held at some point whenever that’s safe to do so.”

This inspired him to create an online petition requesting the law society reschedule the June call to the bar ceremonies instead of cancelling them outright.

“The call to the bar ceremony formally welcomes new lawyers into the profession and collectively entrusts them with the duty of upholding the administration of justice. There's no substitute for this time-honoured rite of passage: candidates don't want a mere reception to celebrate their accomplishments. Once the risk posed by COVID-19 has passed, the Law Society needs to reschedule formal call to the bar ceremonies for all candidates scheduled to be licensed this June,” the petition states.

Kinsinger acknowledged that his inspiration to start the petition comes from a “personal place” because he’s been looking forward to this moment for years.

“The circumstances in which I become a lawyer aren’t going to be as I envisioned them, but even with that being said and even realizing that it’s just not going to be possible to have a traditional call to the bar as I envisioned it, I still think the ceremonies are not just nice, symbolic events. They really are crucial to what we as soon-to-be lawyers will be doing because it’s really the only opportunity where we can get an entire cohort of new lawyers into a room at the same time and impress upon them and charge them with their duties to uphold the administration of justice. Which is why under normal circumstances, except in very extenuating cases, the call to the bar ceremony isn’t optional, everyone needs to attend it,” he explained.

Kinsinger stressed that it’s still not clear what an administrative call entails and whether it involves the swearing of an oath.

He’s also mindful that cancelling the ceremonies was a difficult decision for the law society and it’s occurring in a situation that’s “absolutely out of everyone’s control.”

“People are being impacted in different ways to varying degrees, but I still thought this was an important thing to raise and to demonstrate there is concern about this and really hoping that the law society takes note of that,” he added.

Kinsinger believes the call to the bar ceremony is important for the profession as a whole as it’s about the “profession welcoming in new lawyers.”

“I think it’s something that any lawyer should care about even if they’re not attending that call to the bar ceremony,” he said, adding that “it’s important to realize that these ceremonies are not just a hollow tradition, there’s a lot of meaning there.”

“It’s not just symbolic, it’s important what we do there because we have to recognize that lawyers do have a very privileged role in our society and do have a lot of influence and people entrust us with their rights and their liberties. So to really start your legal career with an event like that where you’re entrusted with the weight of the responsibility, not just on an individual level… but collectively with your peers and be collectively charged with that, I think is really important,” he explained.

The law society did not respond to request for comment before press time.