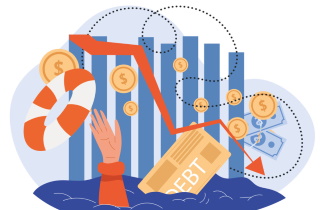 The majority of urgent family motion cases during COVID-19 have concerned parenting issues. However, there have been some recent financial distress cases.

The case of Thomas v. Wohleber 2020 ONSC 1965 concerns a matter where the respondent father removed $775,643.48 from the parties’ joint line of credit (LOC), depleting the entire account. The LOC was secured against the parties’ matrimonial home in Oakville, Ont. The applicant mother requested the return of those funds, the freezing of the LOC account, a non-dissipation order and financial disclosure from the respondent.

Justice Marvin Kurz recognized the mother’s concerns and how it could create an urgent situation for the applicant and the parties’ children. This case met the high test of urgency. Justice Kurz ordered the immediate return of the funds to the LOC, and the account’s freezing once the funds were returned. He also ordered that funds should not be dissipated going forward.

Justice Kurz outlined the following factors as being necessary to meet the urgency threshold: a) The concern must be immediate; it cannot await resolution at a later date; b) The concern must be serious in the sense that it significantly affects the health or safety or economic well-being of the parties and/or their children; c) The concern must be definite and material rather than speculative. It must relate to something tangible (a spouse or child’s health, welfare or dire financial circumstances) rather than theoretical; d) The concern must be one that has been clearly described in evidence and with examples that explain how the matter is urgent.

The court explained that the father’s depletion of the entire LOC may deprive the mother of necessary resources to support herself and the children. The mother is also jointly and severally responsible for repaying all funds that the father removed. She would be unable to pay off the LOC if RBC were to call the loan.

These, among other factors, led the court to a determination of urgency and to award most of the relief the mother sought. The requested order of immediate financial disclosure was deemed not to be urgent at this time and was denied.

Theis v. Theis 2020 ONSC 2001 is one of the first COVID-19 cases to discuss urgency as it relates to spousal and child support. The applicant brought an urgent motion seeking payment of $85,000 from what she states is her share of the proceeds of sale held in trust from the sale of the matrimonial home.

Christina Theis owns a small business providing esthetic services. She has been unable to operate her business since March 25 due to COVID-19 business closures. She claimed that she had not worked much in the weeks previous to the mandatory shutdown. Christina must continue to pay rent and utilities for her business, as well as personal expenses for herself and the children when they are in her care.

Christina also claimed the following in her affidavit:

Justice Madsen outlined the evidence that Christina would need to present to make her case, which included: a) her previous income before the COVID-19 situation; b) her total income currently from all sources; c) her personal and business expenses; and d) the extent of her resources more generally.

This case, brought before the Superior Court of Justice in Kitchener, illustrates some of the necessary materials that must be filed for an urgent support motion. However, some jurisdictions (such as Central East) are only requesting a 14B motion and the applicant’s affidavit to assess urgency. Once urgency is assessed, the court may request further documentation to judge the motion’s merits.

These requirements may be varied in the future depending on the grounds of urgency, and with any potential expansion in the court’s services.

Livia Jozsa is a family lawyer practising with Galbraith Family Law in Barrie, Ont. She regularly assists clients with custody/parenting and property matters in and out of court. Jozsa is a contributing author of the textbook Vulnerable Persons: Protections and Remedies in Canada, focusing on spousal violence.