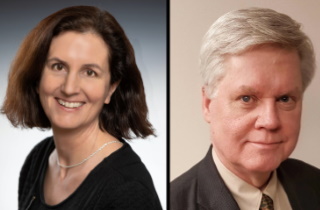 Candidates in the Law Society of Ontario’s (LSO) treasurer election are advancing campaigns that highlight financial responsibility and governance in the face of the COVID-19 pandemic. The impact of the virus on the membership, and the justice system as a whole, cannot be ignored, so how to move the law society forward at this time is top of mind for both candidates.

Teresa Donnelly and Philip Horgan were announced as the candidates for the 2020-21 term on May 14.

Donnelly, a Crown prosecutor based in Goderich, has been a bencher since 2015 and was nominated by benchers Robert Burd and Nancy Lockhart. Horgan, who has his own practice, Philip Horgan Law Office in Toronto, became a bencher in 2019 as part of the StopSOP (Statement of Principles) Slate. He was nominated by fellow benchers and slate members, John Fagan and Cheryl Lean.

Both candidates are members of the Audit and Finance Committee, which Donnelly also chairs.

In interviews with The Lawyer’s Daily, the candidates explained the focus of their campaigns and what inspired them to run for this leadership position.

“To effect change, you have to have a leader who’s got a strong voice, who can bring benchers together, maintain the stakeholder relationships, but also work very closely with the CEO and senior management team, and I say that’s me,” said Donnelly.

Donnelly, a third-generation lawyer, said her family history has given her a “deep and abiding love for the law, but also a deep and abiding interest in the law society.” She also noted that her 26 years as a prosecutor has a “strong tie-in” with the law society’s mandate to govern in the public interest and her experience as a bencher has given her the opportunity to “learn deeply” about the regulator.

These factors, along with her career outside of Toronto, inspired her to run for treasurer, she said.

“The last three treasurers were from inside Toronto and I think it’s important that the treasurer be reflective of the fact that a majority of lawyers [and paralegals] don’t practise in Toronto,” she added, noting that she has a “clear vision” for the law society.

“I was reading The Lawyer’s Daily article ... in which the chief justice was quoted, and he was quoted as saying ‘we must see this as an opportunity to critically reflect on the status quo.’ He was talking about that in the context of courts and court modernization, but those are words that ring true for the law society as well,” she said, noting the law society is “poised for significant change.”

She explained that prior to the pandemic, the law society had been “looking at proportionate regulation and program review” and that “the pandemic has accelerated reviews in those areas.”

“First, we have to deal immediately with the financial impact of the pandemic on the law society,” she said, adding that means taking a “hard look at our approaches to regulating lawyers and paralegals with a view to make changes in a way that prepares for the immediate, and the longer term, consequences of the pandemic, but also protecting the public interest, and also positioning us for the future.”

Her second priority is advancing the LSO’s strategic plan, which outlines the priorities for benchers for their four-year term. The plan includes four parts: proportionate regulation; scope of regulation; competence and quality of service; and access to justice.

Donnelly stressed the importance of the LSO’s competence mandate and said she would “establish a competence task force with specific objectives and a rigorous time frame for a report.”

“The last time the law society engaged in a comprehensive review of the competence mandate was in 2001,” she said, noting that review is necessary to see if modifications need to be made.

Donnelly also noted that her work as a prosecutor makes her “acutely aware” of the need for access to justice. She highlighted the LSO’s family law action plan, arising from the report by former Ontario provincial court chief justice Annemarie Bonkalo, which establishes a role for paralegals in family law as an access to justice initiative.

“We need to implement our strategic plan; it’s a plan we [the benchers] agreed on. We need to move it forward,” she explained.

With regards to the LSO’s conduct mandate, Donnelly would like a review of how the law society regulates and examines risks in public protection. After that, she said, the LSO could “make strategic and policy decisions that would support the law society staff in reducing delays, increasing efficiencies and allocating resources based on where they are needed.”

Horgan told The Lawyer’s Daily that he comes from a family “devoted to public service” and he sees the position as treasurer as “an opportunity to serve up some of my own experiences and goodwill to the benefit of the professions.”

His decision to run for treasurer was “driven primarily by fellow benchers” telling him to give it some consideration.

“I’m actually humbled by the support I’ve received already from both the slate members, colleagues and non-slate benchers to date,” he said.

Horgan noted that so many issues the law society usually focuses on, including the strategic plan which forms part of Donnelly’s campaign, “has now been overtaken by the pandemic and the financial crisis that is presenting to the professions, both lawyers and paralegals.”

He said that being elected as treasurer is “an opportunity to provide leadership in a time of financial crisis.”

Horgan noted that he’s a private practitioner, whereas Donnelly is a “long-term Crown attorney.”

“I’ve been in practice for 32 years, 25 years managing my own firm,” he said, noting that he is “more representative of the greater majority of practising lawyers in the province of Ontario who are at a point of economic uncertainty.”

“The law society has already taken steps to try and address what we anticipate will be reductions in our revenue and, or the impacts that are going to happen in the profession in a meaningful way. Some of which I’m just not at liberty to discuss because it’s part of an ongoing review process internally within Convocation,” he explained

“I’m still running my office during the quarantine. I’m aware of what it means to meet a payroll every 15 days and, as a result, I think I’m well suited to lead Convocation on a go forward basis,” he added.

Horgan noted that one of the issues he’d like to see addressed if he became treasurer is the governance review, which Convocation voted on in 2019.

“There was a recommendation made there to reduce the size of the lawyer component from 40 to 32, from 16 in Toronto to 16 outside of Toronto. In the current crisis and mindful of the need for running a leaner operation, I think that’s a process we could re-engage with the current bench to see if there is some meaningful interest in taking that recommendation forward for the [bencher] 2023 election,” he said.

“But the bigger issue, and it relates to the stuff that I really can’t talk about, is something that we took up in the 2019 election, which is the drift of the previous bench. Part of the reason that our group [StopSOP] got elected and others ran on platforms of trying to maintain some fiscal discipline is that we’re now engaged in a process of putting together what the law society needs and then asking the members to pay for it in their dues,” he added, noting that lawyer and paralegal fees were reduced in the 2020 budget.

Horgan noted that the legal profession is in a financial crisis due to the pandemic and the law society has “to be as sensitive and mindful of the fact that we need to get out in front of that and be ready for the likelihood of either reduced revenues, reduced numbers in the professions, or people taking a part-time approach in order to save a little money on the dues component.”

“So in that mind, some of that work is being undertaken as we speak, but I think that’s an issue we were trying to address in the [StopSOP] slate back in 2019. And when we started that process, you may recall, in September of 2018 that it wasn’t just a drift arising from the culture wars or the ideological proposals, but also a drift on the fiscal side, which we’ve started to correct. That kind of drift was unsustainable, it had to stop, it needed to be reversed. We started that process with the 2020 budget, we now need to take it forward because of the demands on the day,” he stressed.

Horgan acknowledges that it’s difficult for many lawyers and paralegals to maintain a practice right now and the law society will have to adjust to that.

“I don’t look at this as an overwhelming situation, we adjust,” he said, noting that the profession, courts and the Ministry of the Attorney General have had to adapt already. “It speaks to the goodwill that lawyers and paralegals have for the justice system generally. The law society needs to do our part.”

For Donnelly the goal is “a modernized law society that is poised to protect the public, assist licensees, which are lawyers and paralegals, to practise competently and ethically, which all assures the future of self-regulation in the public interest.”

The current treasurer, Malcolm Mercer, will end his second term on June 26, at which point Convocation will elect a new treasurer. The term for treasurer lasts one year and commences upon election.