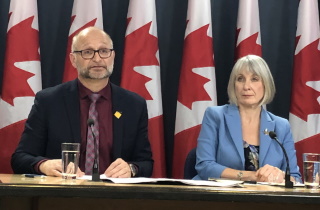 Claiming that the COVID-19 pandemic makes it “impossible” for Parliament to meet an already stretched court-imposed deadline, Ottawa is again seeking extra time to amend the constitutionally defective federal law on medical assistance in dying (MAiD).

Federal Attorney General David Lametti filed a motion in Quebec Superior Court June 11 seeking to extend until Dec. 18, 2020, the Quebec Superior Court’s suspension of its constitutional declaration last September that the “reasonable foreseeability of death” restriction in the Criminal Code on the availability of MAiD unjustifiably violates the Charter ss. 15 and 7 equality and security of the person rights of those facing irremediable intolerable suffering: Truchon v. Attorney General of Canada 2019 QCCS 3792.

The Liberal government opted not to appeal the Truchon ruling, instead introducing last February (shortly before the COVID-19 pandemic hit hard) Criminal Code amendments (Bill C-7) that would repeal the MAiD eligibility requirement that a person’s natural death must be reasonably foreseeable.

(The Commons is currently confining its sittings to dealing with COVID-19-related exigencies.)

“The COVID-19 pandemic has led to unprecedented challenges, including the disruption of the current parliamentary session,” Lametti and Health Minister Patty Hajdu asserted in their joint written statement June 11.

“While this legislation remains a priority for the government of Canada, the realities of the pandemic have unfortunately rendered it impossible to advance Bill C-7 through the parliamentary process in order to meet the current deadline of July 11, 2020,” the ministers said.

“A five-month extension of the ruling’s suspension period is needed to provide sufficient time for Parliament to properly consider and enact this proposed legislation, which is of importance to many Canadians and families across the country.”


If the Quebec Superior Court declines to further suspend its declaration of invalidity, the “reasonable foreseeability of natural death” criterion in the Code would no longer apply to Quebecers as of July 12.

According to the federal government, that criterion would, however, remain in effect in the other provinces and territories.

“This means that criminal law would no longer be applied consistently across the country,” Lametti and Hajdu stated. “Even in these exceptional times, the government of Canada remains committed to responding to this important court ruling as quickly as possible.”

Helen Long, chief executive officer of Dying With Dignity Canada, which intervened in the Truchon case, said in a statement that more than 70 per cent of Canadians strongly support removing the requirement that a person’s death be reasonably foreseeable for them to be eligible for MAID.

“We know that the pandemic has created challenges across the country,” Long said. “And we’re disappointed to know that some Canadians will continue to suffer intolerably because of their inability to access their constitutional right to MAID. It’s critical that the government make this legislation, as well as the five-year review of MAID scheduled to begin later this month, a priority when it resumes in September. Until then, we ask the government to support exemptions for access to MAID that reflects [the Truchon] ruling.”

In his motion for an extension, Lametti points out Parliament adjourned its regular activities from March 13, 2020, until September in order to be able to focus exclusively on the pandemic and its effects on the health and safety of Canadians, “thus preventing any progress of a legislative response to the judgment of this court for more than six months (translation from French).”

“Despite the diligence of the government” it “becomes obvious that, in the current context, a legislative response cannot be adopted before July 12, 2020, the date on which the current suspension will end,” the motion states.

The government adds that, in light of current circumstances, there will be many challenges to even get a new MAiD law enacted before the end of 2020, however the requested additional suspension “should allow Parliament to determine the modalities of a medical-assistance-in-dying scheme, in the light of experience acquired in the past four years, from the interests and concerns of Canadians and of course, the conclusions of this court.”

The government argues that because the possibility exists for individuals facing intolerable suffering to go to court to obtain personal exemptions from the existing law, this “will mitigate the impact of the suspension” of the declaration of invalidity for people who meet all the eligibility criteria for MAiD, except that their death is not reasonably foreseeable as presently required.

Bill C-7 would also permit, for the first time, people who are eligible for MAiD, and whose natural deaths are reasonably foreseeable — and who may lose capacity to consent before MAiD can be provided — to effectively provide advance consent to MAiD, or what the bill calls a “waiver of final consent.”

This would enable persons whose natural deaths are reasonably foreseeable to obtain MAiD after they have lost the capacity to consent on the basis of a prior agreement they have entered into with the doctor or nurse practitioner who is providing MAiD.

The bill is controversial and apt to get a rocky ride in Parliament, in part because of constitutional doubts hanging over its proposed exclusion of persons whose intolerable and irremediable mental or physical suffering stems solely from mental illness — a restriction that Lametti has predicted “will pass muster under the Charter.”