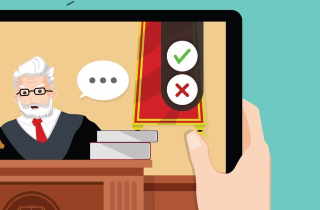 “Don’t cross your arms,” “Don’t forget eye contact,” “Try not to fidget … yes, put down that pencil.” Are these hallmarks of verbal advocacy about to become less relevant?

The United States Supreme Court recently had its first phone hearing, featuring a special guest of a presumed toilet flush (justice cannot wait, as well our bladders). Our Supreme Court has gone further, already completing one remote Zoom hearing this June, where one lawyer lost his video and had to give his argument through the phone, unlike his visible counterparts. It’s intuitive that such a hiccup would affect a lawyer’s ability to advocate, but exactly what effect did that hiccup have? Even after COVID-19 has passed, the chance of remote hearings being more prevalent means oral advocates are in for a career metamorphosis.

As Stephen Grant says in “Advocacy Redux” in the spring 2016 Issue of The Advocates’ Journal; “reading a judge’s advertent or inadvertent signals from the bench … is critical to advancing a party’s cause. This is also why questioning from the bench means so much.” But will seeing a judge through a small corner on your laptop affect a litigator’s ability to pick up these signals? Maybe this will even the playing field for rookie litigators that are matched up against seasoned veterans.

It also remains to be seen whether remote hearings will make aids like PowerPoint commonplace during hearings. With videoconferencing software being able to screen-share, the barrier would be quite low. To prepare for the future, mooting law students across Canada may have to start making slideshows for oral arguments. Do judges award extra points for star-wipe slide transitions? If PowerPoint becomes the standard in all types of hearings, guidelines for appropriate use will be necessary like those found in the United States. An example of why they are necessary is the case of Sergey Fedoruk, who during his trial for the death of his brother-in-law, had the prosecution flash “GUILTY” in their final PowerPoint slide.

Then it must be considered that when technology is a necessity, it can be a structural disadvantage. Bosco Ntaganda has an appeal hearing scheduled this summer for late June to July. Their lawyers have cautioned the International Criminal Court that video hearings could make a fair trial difficult. The defence, as summarized by the International Justice Monitor, says “any virtual hearing must allow for simultaneous display of multiple images; real-time French to English interpretation and transcription” and “the ability for Ntaganda to be held in a location where he can participate in open and closed sessions and to potentially address the Appeals Chamber directly.” Our pre COVID-19 system already had numerous issues with access to justice, so while remote hearings may reduce travel costs and physical barriers found in a courthouse, new challenges will spring forth.

Our courts, in their guidelines released for remote hearings, have anticipated some of those challenges. The Ontario Superior Court of Justice in its Best Practices and Etiquette for Remote Hearings recommends finding an appropriate space: “We may understand that you may not have complete privacy and silence in your current environment … but please do your best to participate from a private quiet space.” This is an acknowledgement by the court that, during a heavy oral argument building tension, it may be expected for a small toddler to waddle in before the piece de resistance. The courts should not blame a lawyer for a problem everyone across the world can relate to. However, while we empathize and know it as a possibility, the fact is an interrupted oral argument is not as effective as an oral argument delivered without interruption.

Remote hearings are not necessarily better or worse than in-person hearings: as daytime is bright and nighttime is dark, both have their own advantages and disadvantages. Who knows if one trumps the other in seeking justice? But they are each unique in their way, and that means litigators everywhere will have to adapt. We know that oral advocacy matters, as a 2008 study published in the Washington University Law Review found that “Supreme Court Justice’s finals votes on the merits of a case are heavily influenced by oral advocacy …even after we control statistically for other factors likely to influence Justices’ votes.”

Does anyone know if and how that will change with Zoom? Per Brian H. Greenspan in The Difference between Trial and Appellate Advocacy, “I strongly advise counsel to be sensitive to the reactions of witnesses, the mood of the judge; to the emotional response of the jurors.”

That advice still rings true for virtual justice, but the way to act on that advice is still a work in progress. Justice John Laskin himself estimated that over a quarter of oral arguments he heard changed his mind; what will our judges during COVID-19 say?