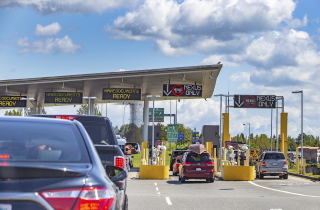 COVID-19 and U.S./Canadian border: Not all bad news

The U.S./Canadian border closed on March 19, 2020, for the first time since 2001 following the 9/11 terrorist attacks. While essential workers, including those in the healthcare industry are still allowed to cross, the nearly 200,000 people who cross on a daily basis for both recreation and tourism purposes, have had this important lifeline cut off.

The Canadian government is stating that the border is technically not closed. Instead, it has stated that Canada introduced border restrictions on foreign nationals, including U.S. citizens, for all discretionary travel to the U.S. In addition, Canadian citizens and permanent residents can enter Canada. For all intents and purposes, the U.S./Canadian border is “closed” for non-essential travel. Even the prime minister has repeatedly stated that. As the U.S. has begun reopening its states, the Canadian government is staying cautious, adapting a wait-and-see approach to reopening the borders. Canada has exceeded 103,000 COVID-19 cases and 8,500 deaths, while the U.S. remains the epicentre of the COVID-19 pandemic, reporting over 2.6 million cases and 129,000 deaths.

Initially, both U.S. and Canadian citizens were more than happy to comply with the closure, but as time has passed, complaints from property owners on both sides of the border have increased. As many Americans who own vacation properties in Canada, and vice versa, were unable to check on their homes and open up their cottages for the season, congressman Brian Higgin petitioned to permit crossings to be expanded to those with family, property and business interests.

We have seen a softening of the land border restrictions. On June 9, Prime Minister Justin Trudeau announced that immediate relatives of Canadian citizens can cross the border, though they will be required to self-quarantine for 14 days. This was certainly good news for Canadian families.

And more good news: both the Canadian Border Services Agency (CBSA) and the U.S. Customs and Border Protection (CBP) continue to process work permits at the land borders. Canadian citizens can apply for TN and/or L-1 status at the land borders. For U.S. citizens, applicants can still apply for their work permit at a port of entry. And what’s more, the work permits do not have to be for essential employment. In the spirit of improving both economies, short wait times and a willingness on both sides to approve cases actually make it a great time to apply for a work permit on the other side of the border.

The U.S./Canadian border is closed until July 21. Rumors are swirling that it will remain closed until Labour Day, but hopefully, travellers will be able to salvage some late summer plans. However, those on both sides should be prepared for many restrictions and long waits.

What can you do to avoid the waits? Watch the news. Check the latest information on the CBP and CBSA websites. Make sure your vehicle is clean, your I.D. and passport are current, and settle in for long lines on both sides of the border.

(Editor’s note: This previously published article has been updated to include new information and correct some inaccuracies.)