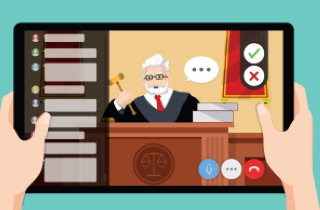 With the adoption of remote hearings by the courts in this pandemic, concern has been expressed as to due process issues, particularly regarding the remote examination of witnesses. In the seminal case of Arconti v. Smith 2020 ONSC 2782 for example, the plaintiffs objected to the remote examination for discovery of a defendant because “the plaintiffs do not trust the defendants not to engage in sleight of hand to abuse the process,” among other reasons.

Justice Frederick Myers acknowledged that there were legitimate concerns: “It would not be difficult, for example, to put a person or another computer screen outside the field of view of the camera that could enable improper prompting of the witness. I suppose with current Bluetooth technology, even where parties are in the same room, a witness can wear a hearing device and readily receive improper prompting. People can also send hand signals to witnesses in court as well.”

Justice Myers was not swayed by these concerns regarding coaching, however, and ordered the remote examination to proceed. Arconti was applied by an Alberta court in Sandhu v. Siri Guru Nanak Sikh Gurdwara of Alberta 2020 ABQB 359 and remote cross-examinations on affidavits ordered to proceed.

Other frequently expressed due process concerns include the difficulty in assessing the credibility and demeanour of the witness remotely, and the difficulty of impressing the solemnity of the proceedings on a witness in the absence of the formal trappings of a courtroom.

As the courts struggle to set protocols to deal with remote hearings in this pandemic, it seems clear that these protocols will be of larger assistance as the courts adopt remote hearings for their efficiency, especially for remote communities, and the lowering of expense, thus facilitating access to justice long after the pandemic recedes. The viability of the protocols to be set is therefore of continuing importance.

The Law Society of Alberta Code of Conduct establishes the guidelines and ethical duties of lawyers in their communication with witnesses giving evidence — these rules apply whether the examination is “in person” or “by remote means.” Unlike an examination “in person, however, examinations by “remote means” do not have the same checks and balances, and reliance must be placed on both the heightened ethical approaches of lawyers as well processes to ensure fairness and compliance with long-standing expectations for appropriate conduct.

With respect to the examination of witnesses, the Law Society of Alberta Code of Conduct at Part 5.4-1, for example, proscribes a lawyer, whether participating in a remote hearing or otherwise, from influencing the witness or potential witness to give evidence that is false, misleading or evasive. The ethical duty against improperly influencing a witness or potential witness applies at all stages of the proceedings, including when preparing the witness to give evidence and during testimony. Further, the lawyer is proscribed from obstructing a cross-examination of the witness in any manner, and it is generally accepted that the lawyer is not permitted to communicate with the witness during cross-examination. During questioning and other examinations, the Code of Conduct exhorts that lawyers should scrupulously avoid attempts to influence witness testimony. (These constraints may not, of course, be of comfort in dealing with a self-represented litigant.)

As it appears from the emerging case law that remote hearings are deemed acceptable notwithstanding the various concerns, what are best practices to ensure that ethical standards are met in remote hearings and examinations? In the Ontario guide Best Practices for Remote Hearings dated May 13, 2020, many suggestions are made. When considered together with suggestions from Alberta, England and Australia, and in view of the helpful court directions in Children’s Aid Society of Ottawa v. M.L. 2020 ONSC 3567, the following best practices can be extrapolated:


This is the first of a two-part series. More of these best practices in part two.

Barb Cotton is the principal of Bottom Line Research and assists solo, small and specialized lawyers with their research and writing needs. She can be reached at (403) 240-3142, cell (403) 852-3462, e-mail barbc@bottomlineresearch. Christine Silverberg is a Calgary-based lawyer with a diverse advocacy, regulatory and litigation practice. She can be reached at (403) 648-3011, christine@silverberglegal.com or through www.christinesilverberg.com.