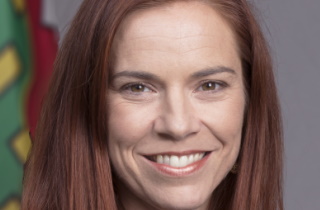 As it continues to struggle with some of the highest crime and incarceration rates in Canada, the Northwest Territories justice system will emerge in some ways stronger from the COVID-19 pandemic, says its justice minister.

“This has obviously been a very stressful time to be in the position I’m in,” said Caroline Wawzonek, a former Yellowknife criminal lawyer who serves as both justice minister and finance minister in the cabinet of Northwest Territories (N.W.T.) Premier Caroline Cochrane.

“Anyone who’s in a senior government role has been under tremendous pressure for the last few months,” added Wawzonek. “But the amount of idea generation and inspiration and the drive to get things done has really been fantastic. A lot of the innovation I’m seeing in the justice system I hope continues, and I think it will continue.”

In the early days of the pandemic, the N.W.T. government quickly shut down its courts and tried to relieve pressure on its prison system to reduce the risk of an outbreak.

In a strong show of co-operation, lawyers with the Public Prosecution Service of Canada, who serve as the territory’s only Crown counsel, worked closely with members of the defence bar to craft consent releases where appropriate, and inmate applications for temporary absence were fast-tracked.

Despite challenges with broadband access across the territory, the Department of Justice is now using online video technology for remote bail and remand hearings.

“This is something we’ve wanted to look at and have tiptoed around for years in the justice system,” she told The Lawyer’s Daily during a telephone interview. “This year, this [pandemic] has forced us to do it.”

The measures have helped the N.W.T. government reduce its remand population by 63 per cent since March and its overall inmate population by 30 per cent, said Wawzonek.

That’s a significant achievement in a territory where the incarceration rate is seven times the Canadian average. Wawzonek noted that the Northwest Territories has the second highest crime rate in Canada per capita, after Nunavut, and the second highest rate of domestic violence, after Saskatchewan.

The use of videoconferencing has resulted in real time savings and has helped more people stay in their communities for court appearances, she said. N.W.T. traditionally operates a circuit court system, with a travelling court regularly rotating through most of the territory’s 33 communities, spread across a vast area. The flight from Yellowknife to Fort McPherson in the far northwest, for example, is about two hours.

The Justice Department is now considering a proposal to extend videoconferencing to include remote docket appearances.

Earlier this month, Wawzonek stood in the territorial legislature to announce the Justice Department’s policing priorities for 2020-21, acknowledging systemic racism within the RCMP and stating that “promoting confidence in policing remains a priority.”

Because of the nature of the federal-territorial funding agreement with the RCMP, so called “defunding” the police is not necessarily an option in the N.W.T., said Wawzonek.

“Those are not necessarily the tools that we have here,” she noted. “But I think the point we want to be making within our communities is what can we do to make our communities feel safer and actually feel like the administration of justice and the enforcement of public safety is theirs — that it’s their community, their vision, and it’s something that serves them.”

To that end, each community has developed a community-police engagement plan. The RCMP has also created a Commanding Officer’s Aboriginal Advisory and an Aboriginal Policing Services unit. All new officers in a community are required to present a personal biography and attend a cultural orientation.

In some respects, said Wawzonek, the territory’s justice system can be a model for other parts of Canada. Its updated Corrections Act, passed in August 2019, focuses less on punishment and more on the rehabilitation and community reintegration of offenders. As part of that process, she explained, one of the N.W.T.’s three correctional facilities is being converted into a “therapeutic community” guided by a philosophy of changing behaviours and healing as opposed to traditional corrections.

Wawzonek said she would like to see other alternative forms of justice play a bigger role in the territory. She is a strong believer in restorative justice and gave a TED Talk on the topic in 2018.

“Restorative justice as a philosophy can really be introduced from the starting point all the way through, and I’m looking for what levers I can pull because I don’t control the Criminal Code,” she said.

“I do hope that we can continue to evolve our justice response in the North. There are a lot of things we do really well here, and there’s a lot of opportunity because of our really strong sense of community and a strong sense of respect between communities.”