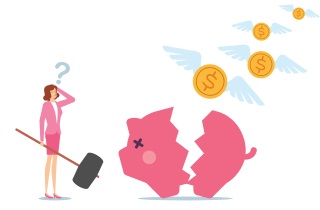 Disproportionate effects of poverty on divorced women: An access to justice issue

"Every individual is equal before and under the law and has the right to the equal protection and equal benefit of the law without discrimination."

Section 15 of the Canadian Charter of Rights and Freedoms promises every citizen equal protection and benefit of the law without discrimination. According to this provision, economic equality should be effectively prioritized within sociolegal systems in Canada.

Despite this, however, gender inequities within governmental policies, an existing wage gap between males and females, and difficulties balancing familial obligations with professional development leave divorced women susceptible to alarmingly high rates of poverty.

Combined, these factors constitute the feminization of poverty; a concept that holds especially true for divorced women carrying the child-rearing responsibilities of a single mother.

Cutbacks on pay equity, child-care resources and home care services directly affect single mothers who are raising a family on their own after divorce. With the cost of an average divorce ranging from approximately $1,000 to $20,000, single mothers cannot afford these expenses alone. The abolishment of government assistance programs like the Court Challenges Program in 2006 removed $5.5 million of funding for lawyers and witness fees in family law proceedings.

In Ontario, Legal Aid Ontario's eligibility states that the net income of a two-person family must be earning less than $32,131. In 2018, single mothers on average were the lowest-earning group among working women in Canada, earning approximately $25,300/year

Given these circumstances, divorced mothers are left with very limited options. Some may choose to self-represent in complex family law matters while others endeavour to obtain other forms of income to finance costly family law proceedings.

Within a traditional nuclear family framework, stereotypical gender norms tend to classify women as innately nurturing caregivers. For this reason, mothers were found to gain custody of their children 74 per cent of the time. Despite their economically disadvantaged position, the onus of child-rearing responsibilities is primarily passed along to mothers following a divorce.

As the cost of raising a family rises, the busy schedules of single mothers may only leave enough time for part-time employment. While daycare proves to be too expensive, the lack of a contemporary nationally funded child care programs further pressures divorced mothers into flexible part-time employment.

With most of their time spent in the private sphere of the home, most divorced mothers become well-trained in skills relevant to household duties and caregiving procedures. For this reason, many of these women are hired for positions in the paid workforce with similar caretaking provisions. These positions are usually precarious and underpaid, factoring into a prominent wage gap between Canadian men and women.

As of 2018, the wage gap is such that one dollar earned by a man equates to 0.87 cents made by a woman in the same line of employment. This ongoing pay gap is the single leading cause of the sharp decline in economic well-being for women. In order to obtain higher paying positions and wages, individuals must usually enhance their existing education in order to obtain more marketable, "economically viable" skills in the job market.

For divorced mothers in this position, two separate issues exist as significant barriers to obtaining higher education. The first is in relation to the high costs of tuition when pursuing an advanced college diploma or university degree. For full-time Canadian students attending post-secondary institutions, undergraduate tuition fees average $6,463 per year. With each passing year, the rising tuition fees become too costly for divorced mothers to afford.

The second issue for divorced mothers lies in the difficult task of balancing familial obligations and professional development. In single-earner households, the parental figure often balances part-time employment and unpaid labour in the home.

For divorced mothers, the majority of their "free time" is invested in household responsibilities such as cooking, cleaning, child-rearing and property maintenance. As these initiatives leave little to no time for other activities, it becomes increasingly difficult to complete the educational requirements of an academic degree, which require a great deal of undivided attention and focus.

These existing socioeconomic barriers significantly subordinate a divorced woman's position in family law proceedings and undermine her ability to independently create and maintain an overall good quality of life.

In order to rectify long-standing access to justice issues within our family law systems, the struggles of economically disadvantaged divorced mothers must be acknowledged and addressed accordingly. Without this, the "equal protection and benefit of the law" provision remains highly gendered and therefore, inequitable.

This is part one of a two-part series. Part two: Covert socio-legal implications of self-representation in smaller communities.

Aria Kamal is a second-year student at Lakehead University's Bora Laskin Faculty of Law. She has a great passion for social justice, human rights and family law.

Interested in writing for us? To learn more about how you can add your voice to The Lawyer's Daily, contact Analysis Editor Yvette Trancoso-Barrett at Yvette.Trancoso-barrett@lexisnexis.ca or call 905-415-5811.