“When authority in any form bullies a citizen unfairly, all other citizens are guilty.”
Pierre Elliott Trudeau The Essential Trudeau

What motivates us to become lawyers? For some, it is the belief that you will have a “prestigious” career and have a good shot at having a financially secure future. For others, it is the belief that lawyers can make a difference in peoples’ lives, advance their interests positively, effect social change and pursue justice. Then there are those that just fall into the profession. 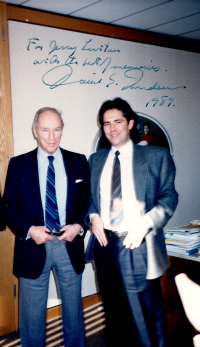 Trudeau Sr. to the author: 'If you run, run for a reason.'

Money was never my prime objective growing up. Don’t get me wrong, I wanted to provide for my children and have a comfortable life. But I became a lawyer because at the age of 14, in 1968, I was enthralled by the emergence on the scene of Pierre Elliott Trudeau. He talked about the promise of Canada, about a “just society,” the “rule of law,” “equality and fairness” and a “Charter of Rights.” So smart and courageous, always ready for the good fight, he captivated my young mind and helped make me love Canada for all it could be. Pierre Trudeau was a lawyer, but the best kind.

Before Pierre Trudeau, I had other heroes, namely, The Beatles, and in particular John Lennon. John had some similar qualities to Pierre Trudeau. He too was spectacularly smart and courageous. He as well was a poet and one of the most important cultural figures of the 20th century. His staggering social impact continues to this day around the globe.

At age 14, I spent the better part of the day with John Lennon and Yoko Ono when he arrived in Toronto in May 1969 on the way to the Montreal bed-In for peace. I snuck in, he liked my “brave” spirit and agreed to a taped, 30-minute interview so that I could “spread the word” to other kids. I began my interview with questions about his peace campaign and how young people could help him. “Help me by helping yourselves,” he answered in the customary Lennon-witty style. “You guys are going to be the establishment in a few years. It’s not worth knocking it down ‘cause it’s convenient to have the rooms and the machinery. The thing is to protest, but protest nonviolently. Violence begets violence, you know, and if you run around wild you get smacked, and that’s it. That’s the law of the universe.” 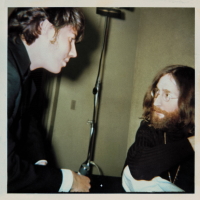 Lennon, to the youthful author, above: 'Spread the word.'

I told him about my other hero, Pierre Trudeau, and asked if he was “pleased with him.” “Trudeau seems OK,” John answered. “I don’t really know about him.” I always believed that I had a significant role in John and Yoko wanting to meet with our then prime minister because of their belief that if kids like me admired him there was “… a chance that he’s OK.” The remarkable merging of my two heroes led me to want to be a lawyer, to do good, to help people and make this world, in some way a better place. That should be the object of every lawyer, particularly litigators and advocates. To pursue justice, to do good and to make this world a better place. I had the good fortune to become friends with Pierre Trudeau later in life, when he was retired from politics and both of us were practising lawyers, and told him of my exchange with John about him and my role in their meeting. “John was a great poet,” he remarked. On that first meeting with Pierre Trudeau, when there was talk of me running for office, his advice to was: “If you run, run for a reason.”

What better time is there now, amidst all this upheaval on so many levels, to go to law school, to become lawyers, not to pursue wealth or esteem, but to make this world a better place. The breathtaking impact of COVID-19, witnessing the horrific effects of climate change in real time and the opening of our eyes to the historical and systemic wrongs of racial prejudice and dehumanizing treatment under the law set the stage for a bold new era of lawyering.

Lawyers have power that derives from their education, knowledge, experience and developing skills to persuade and to prevail. It does not have to be solely for their clients’ interests. The higher calling for a lawyer is to try and do good for the betterment of us all. Equality, diversity and inclusion should not simply be a mandatory area of professional development. It should be our training to ensure that we are constantly cognizant that everyone in our society should have access to justice, the benefit of our professional skills and to be treated fairly and decently.

Jerry Levitan is a Toronto lawyer who practised litigation, administrative and liquor licensing law. He as well is the producer of the Academy Award nominated and Emmy winning short animated film I Met The Walrus about the day he spent at age 14 with John Lennon and author of the Canadian bestselling book with the same title.