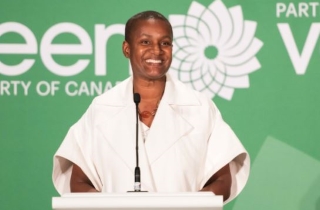 The new leader of Canada’s Green Party said she will use her legal training to push her party’s priorities, which include greater access to law school.

Toronto lawyer Annamie Paul was chosen by Green Party members on Oct. 3 as their new leader — defeating seven other contenders and going on to make history as the first Black woman to lead a federal party.

On Oct. 5, Paul, spoke to members of the media about going forward and talked of her party’s agenda — particularly when it comes to the ongoing challenges thrown up by COVID-19.

“We have … urgent needs that have come to the fore during the pandemic; we have a social safety net that has let people … fall through,” said Paul, noting her father died in a long-term care facility.

“He is one of thousands of Canadians who died unnecessarily because the government and the previous governments dropped the ball. And if we don’t fix that problem, then more people will die in this next wave … that has hit us, really. So, long-term care; universal pharmacare; guaranteed livable income, these are the policies we need to have in place as soon as possible if we are going to protect everyone. … And then, we can never forget about the climate emergency.”

Paul’s victory ends a year-long race to replace Elizabeth May, who stepped down in November following 13 years as party leader.

(Paul will also be running in the upcoming Oct. 26 byelection for the riding of Toronto Centre, left up for grabs when MP and finance minister Bill Morneau stepped down following news of his involvement in the WE Charity conflict of interest scandal.)

Paul, the daughter of immigrants who came to Canada from the Caribbean in the 1960s, attended law school at the University of Ottawa and was called to the bar in 1996. According to her profile page, she was an adviser with the International Criminal Court in The Hague, was a political officer in Canada’s mission to the European Union and has served various international NGOs as an adviser or board member.

Paul, who does not currently practise law, was asked how her legal training will play out in her role as Green leader.

“That’s the reason I went to law school,” she said. “I knew I wanted to be involved in public policy and I knew that this would be a great set of tools in my toolbox in order to do that, and it has held me in great stead, whether working at the International Criminal Court or in global affairs in Brussels or founding socially innovative organizations. Having those critical thinking skills has been really important to me.”

Paul extended her answer in order to “come back to the policies we’re talking about.”

The Green Party reportedly had almost 24,000 members cast ballots in this race, with Paul winning just over 12,000 votes.

The party’s voice grew louder under Paul’s predecessor, May, who was victorious in winning the B.C. riding of Saanich-Gulf Islands in 2011, thus acquiring a seat in Parliament.

The Greens currently occupy three seats — one held by May, another by New Brunswick’s Jenica Atwin (Fredericton) and another by B.C.’s Paul Manly (Nanaimo-Lady Smith).