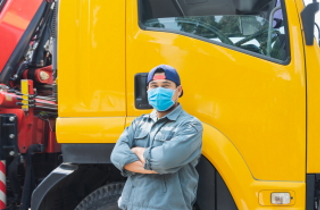 The Canadian trucking industry has had to adapt to the changing circumstances of COVID-19 in order to keep supply chains moving. This article serves as an overview of some of the legal issues that this industry has faced and considerations in connection with the reopening of the economy.

When the pandemic hit Canada and businesses were subject to government-mandated closures, some of the first questions that the trucking industry faced, as did many businesses, was whether or not they were considered “essential services” and whether they could cross provincial and international borders.

As of midnight, March 21, 2020, the Canada-United States border became closed to “non-essential travel” and those “travelling for an optional or discretionary purpose.” Travel restrictions have been implemented under the authority of the minister of health through emergency orders under the Quarantine Act and of the minister of transport through interim orders under the Aeronautics Act. The orders were originally supposed to remain in effect for 30 days but have remained in effect and been extended several times since the closure.

The orders continue to impose mandatory travel restrictions for all international travellers returning or entering into Canada. However, the Notification of Temporary Travel Restrictions Applicable to Land Ports of Entry and Ferries Service Between the United States and Canada states that “Individuals engaged in lawful cross-border trade” (e.g. truck drivers supporting the movement of cargo between the United States and Canada) are considered “essential” and authorized entry into Canada. The intent was to preserve the supply chains which ensure that food, fuel and life-saving medicinal supplies were able to be transported between the countries. These workers are still required to practise social distancing and closely self-monitor and must self-isolate upon exhibiting any symptoms. The onus is on the foreign national entering Canada to demonstrate the purpose of their travel.

In addition, truck drivers entering from the United States are exempt from the mandatory 14-day quarantine that is required for all individuals, including Canadian citizens. The government has identified the following class of persons providing an essential service to be exempt: “Persons in the trade of transportation sector who are important for the movement of goods or people, including truck drivers and crew members on any aircraft, shipping vessel or train, and that cross the border while performing their duties or for the purpose of performing their duties.”

It’s important to note that even if workers are exempt from the travel restrictions and Quarantine Act, foreign nationals may still be prohibited entry into Canada from the United States if Canada Border Services Agency (CBSA) officers and/or public health advisers at the border have reasonable grounds to suspect the foreign national displays signs or symptoms of COVID-19, including a fever, cough, and/or breathing difficulties. In addition, CBSA may question whether the individual has returned from international travel in the preceding 14 days, which may also result in being denied entry.

At the provincial level, many of the provinces and territories enacted state of emergency declarations or declared public health emergencies. These declarations restricted public gatherings and travel and ordered the closure of all businesses providing “non-essential services.” Originally, this question of what was considered “essential” vs. “non-essential” posed some confusion for those involved in transportation, and logistics generally, as the definition is not uniform across the provinces/territories and was constantly changing for a while at the beginning of the pandemic.

Additionally, just because a company qualified in one province as an essential business did not mean that it automatically qualified in another province. Some provinces considered transportation and logistics to be “essential” businesses on their own, while in other provinces they may need to be transporting or arranging for the transport, or storing, of essential goods in order to qualify. As a result of the lack of uniformity between the provinces, trucking companies needed to consider the language of the lists in each province or territory where they carried on business, and in the case of transportation companies, the provinces that their drivers were transiting through.

If a trucking company determines that their business is considered essential in the provinces and territories where they carry on business and where their drivers were transiting through, then letters or other documentation should be issued to their drivers on company letterhead advising that they were engaged by the company to provide an essential service, and what exemption(s) are being relied upon to assist the CBSA, police, and other enforcement officers in the event of a roadside stop. As well, it is recommended the company monitor the health of drivers crossing the border and travelling internationally to ensure compliance with the travel restrictions and uninterrupted service.

Trucking businesses also had to determine whether or not their various registrations and permits that were coming up for renewal were subject to extensions, and if not, how they would obtain such renewals. In order to promote social distancing and limit the spread of COVID-19, the federal government, provinces and territories closed many service centres (e.g. Service Canada) or reduced the number of hours and locations that were open. In many cases, it was announced that drivers’ licences, vehicle registrations and carrier products and services that expired after a certain date would remain valid and in good standing past the expiry date until further notice.

Similarly, it was announced that all Trusted Traders and Partners in Protection members who were up for re-evaluation would maintain their status during this time as long as they remained compliant. Commercial drivers holding a Free and Secure Trade (FAST) card who submitted an application for renewal prior to the expiry of their card would also maintain their membership and remain in active status for 18 months beyond the expiry date.

Jaclyne Reive and Mabel Kyei are associates at the Toronto office of Miller Thomson LLP.