Prime Minister Justin Trudeau is pleading with Canadians to stay home and physically distance to slow the quickening spread of COVID-19 but is not ready to use a federal “hammer” to close interprovincial borders as a response to spikes being seen around the country.

Trudeau’s dire urging, made during a Nov. 20 address to the nation, came just hours after federal health officials warned that the country could see up to 20,000 new cases a day by the end of this year should Canadians maintain the current number of people they come in contact with each day.

And that number could go as high as 60,000 if people’s lack of physical distancing gets any worse, warned Canada’s chief medical officer of health Dr. Theresa Tam as part of an early-morning epidemiology and modelling briefing. 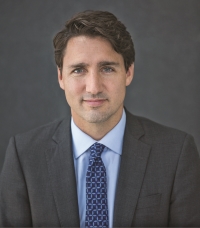 With those grim projections in mind, Trudeau said Canadians “need to do everything we can, right now, to slow the spread of COVID-19 — to stop the spike in its tracks.”

“If you were planning to see friends this weekend, maybe don’t; if there was a birthday party or a gathering for dinner you were thinking about doing, don’t do it,” Trudeau said. “We’re in a moment right now, even with all the sacrifices I know Canadians have been making of the past 10 months, we are now going to really have to tighten up once again.”

Trudeau drove home his point by referencing the grim projections talked about by Tam.

“I know this isn’t what people wanted to hear, but we have to be realistic about the situation. We’re seeing huge spikes in places like Ontario, Manitoba, Saskatchewan, Alberta and Nunavut, with a record number of hospitalizations across the country. Overwhelmed hospitals are a problem for people who need COVID-19 care, but it’s also an issue for people who need other care, whether it’s cancer treatments or emergency surgery.”

Trudeau also confirmed recent reports that the closure of the Canada-U.S. border to non-essential travel will be extended until at least Dec. 21.

“I think we need to recognize that there are many weeks still until Christmas, and it’s right to give people hope that there might be ways that we can gather at Christmas, but so much depends on what we are doing right now … to reduce our contacts, to get through the next weeks and see the cases that are right now spiking almost out of control get back under control. We all want to try and have as normal a Christmas as possible, even though a normal Christmas is, quite frankly, right out of the question.”

During questions from the media, it was pointed out to Trudeau, as it has been before, that while restrictions are generally in the hands of the provinces and territories, the federal government holds a big stick when it comes to emergency powers and an ability to enact provincial and territorial border restrictions.

“I think the ideal of bringing in the federal Emergencies Act to shut down the borders … is not an idea I’m even contemplating right now,” said Trudeau. “I know there are certain regions who’ve made decisions … to close their own borders. The Atlantic Bubble certainly didn’t happen because the federal government mandated it. The provinces in the Atlantic stepped up and limited travel in their bubble and it has worked very well, but they didn’t need permission or direction from the federal government to do it. They just did what worked for them. … Provinces have lots of tools at their disposal, and I’m not looking to bring in a federal hammer to try and do things when we’ve seen provinces be very effective at doing it themselves. But I will add my voice to all those voices across the country … who are saying let’s do what we need to do … to get this explosion of cases … under control.”

During the earlier briefing, Tam, who was accompanied by her deputy, Dr. Howard Njoo, and federal Health Minister Patty Hajdu, said to reverse the current upward trend in cases would take a combined effort by health officials and everyday Canadians.

“Without sufficient reduction in contact rates, we are forecasting to have 20,000 cases daily by the end of December, with an … increase in hospitalizations and deaths,” she said.

“An average of about 4,800 cases are now being reported daily … and about 15 per cent more daily cases were reported this week compared to the last.”