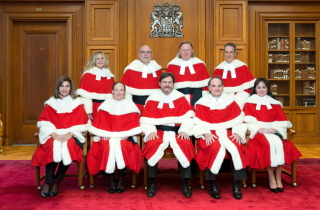 As it continues to cope with the ongoing COVID-19 health crisis, Canada’s Supreme Court will use its winter session to tackle issues of delay in criminal proceedings, inconsistent evidence in a historical assault case, jurisdictional boundaries between labour arbitration and human rights adjudication and a province’s constitutional control over a city’s council.

Running from Jan. 19 to March 25, the Supreme Court of Canada’s winter session will hear 17 matters — 10 civil and seven criminal — which will largely be carried out with the justices being physically present in the courtroom and counsel appearing via Zoom videoconferencing.

Since the start of the pandemic in March, and as lower courts across the country either shut down or adjusted operations, the Supreme Court has taken unprecedented steps in the name of health and safety after adopting remote hearings to resume its operations in June.

The courtroom was reconfigured to feature plexiglass barriers and a two-tiered bench, with five judges occupying the top and four sitting on the bottom.

And while the courthouse remains closed to both media and the public, hearings are carried live on the Supreme Court’s website.

The trio’s trial began in August 2015, around one year after their arrest, and it ended in July 2017. At the centre of this case is the landmark ruling in R. v. Jordan 2016 SCC 27, which resulted in benchmarks being set to combat delay in proceedings.

After being found guilty, the three filed a Jordan application, requesting a stay due to unreasonable delay in their trial.

The application judge granted the stay based on the Jordan guidelines.

But Ontario’s Court of Appeal reversed the ruling and sent the three accused back down for sentencing.

The trio then turned to Canada’s high court, arguing the Appeal Court wrongly calculated delay by adopting a “micro-accounting” approach, which had been rejected by the Supreme Court in the Jordan case.

On Jan. 22, the Supreme Court will hear Her Majesty the Queen v. Angus Frederick Waterman, which involves a Newfoundland man alleged to have committed indecent assault and gross indecency against a minor during a five-year period in the 1970s.

The complainant came out years later with the allegations. However, inconsistencies were found between the allegations made before Waterman’s trial and those heard at trial. Still, Waterman was found guilty.

But Newfoundland’s Appeal Court overturned Waterman’s convictions, noting the inconsistencies in the complainant’s evidence. The Crown appeals to the Supreme Court as of right.

On the civil side of things, the court will hear a Feb. 16 case that originated at the Manitoba Human Rights Commission.

The case pivots on Horrocks refusing to sign an agreement proposed during a meeting on her suspension that would have required her to abstain from drinking alcohol, get counselling and submit to random testing by her employer.

Horrocks and her union argued the terms of the agreement were discriminatory based on her being disabled due to an addiction.

Rather than go through her collective agreement and labour arbitration, Horrocks turned to the human rights board. Her employer objected on jurisdictional grounds, but the board dismissed this and found Horrocks’ addiction to fall under Manitoba’s Human Rights Code.

Horrocks’ employer then unsuccessfully turned to the province’s Appeal Court, which found that while a labour arbitrator was the one with jurisdiction when it came to the firing of unionized employees, the nature of Horrocks’ dispute was whether the actions of her employer were discriminatory.

Horrocks’ employer appealed, and the Supreme Court of Canada will now examine the jurisdictional boundaries between labour arbitration and human rights adjudication.

On March 16, the Supreme Court will hear City of Toronto v. Attorney General of Ontario, which involves a controversial decision in 2018 by Ontario’s Conservative government to drastically reduce the number of councillors at Toronto’s City Hall.

The Supreme Court will decide on the constitutionality of Ontario’s Better Local Government Act (BLGA), which reduced Toronto’s council from 47 to 25 right before municipal elections were to occur in that city.

The Superior Court sided with the city. But, days later, the lower court’s ruling was stayed by the majority of Ontario’s Court of Appeal, which found the situation to be political in nature and thus not needing court intervention and that the rights of council candidates and voters were not being infringed upon by the BLGA.

The City of Toronto then appealed to the Supreme Court.