Under growing pressure from doctors, hospitals and some local medical officers of health, Ontario has declared its third state of emergency and issued a provincewide stay-at-home order effective April 8 at 12:01 a.m. in a desperate bid to reverse a dramatic increase in new cases of COVID-19 variants and relieve overflowing hospital ICUs.

The decision, announced in an April 7 government news release, comes less than a week after the province imposed what it called an “emergency brake shutdown” across the province.

Under the stay-at-home order, non-essential retailers will be forced to close except for curbside pickup via appointment only between the hours of 7 a.m. and 8 p.m. Retailers considered essential, such as grocery stores and pharmacies, will remain open for in-person shopping at 50 per cent capacity. In-person shopping at discount and big-box stores will be limited to grocery items, pet care supplies, household cleaning supplies, pharmaceutical items, health-care items and personal care items.

In-person shopping by appointment and not exceeding 25 per cent capacity will also be allowed at other stores considered essential, including safety supply stores, optical stores, telecommunications outlets, auto and boat dealerships and repair shops, and businesses that sell, rent or repair assistive or medical devices. Outdoor garden centres and indoor greenhouses will also be permitted to open at 25 per cent capacity between 7 a.m. and 8 p.m.

At an afternoon news conference, Premier Doug Ford insisted that schools remain safe and said the government is committed to keeping them open across the province, even though local medical officers of health in Toronto and Peel Region ordered them closed this week.

Saying that vaccination remains Ontario’s best hope of beating the virus, Ford announced that mobile vaccination teams are being organized to administer vaccines in high-risk congregate settings, residential buildings, faith-based locations and locations occupied by large employers in “hot spot” neighbourhoods to individuals aged 18 or over. And starting next week, he said, workers who support students with special education needs across Ontario, as well as all education workers in high-risk neighbourhoods in Toronto and Peel Region, will be eligible for vaccination, as the supply allows.

As of April 9, he added, booking eligibility for vaccinations will be extended to include individuals aged 50 and over for appointments at mass immunization clinics in high-risk areas using the provincial booking system.

To help combat the rising number of outbreaks at workplaces, Ford said the government will also increase workplace inspections and rapid testing in workplaces in regional hot zones.

“The reality is, despite everything we’ve done so far, the COVID-19 situation in Ontario is getting worse as these new variants continue to spread,” Ford said at the news conference. “Our hospitals are reaching capacity and patients in the GTA must now be sent to other parts of the province for care. In fact, we learned yesterday morning that admissions to ICUs in the past week are increasing faster than the worst-case scenario predicted by our experts.

“Things are extremely, extremely serious right now, and I’m extremely concerned,” he added. “And right now, above all else, our plan is to get needles into arms and protect our hospitals.”

In an interview with CBC News Network, Dr. Andrew Morris, an infectious diseases specialist and a member of the province’s science advisory table, said the government should have implemented more aggressive public health restrictions six to eight weeks ago to address the dangers posed by the COVID-19 variants. The delay has probably caused unnecessary deaths, he added.

In an April 7 news release, Ontario NDP Official Opposition Leader Andrea Horwath accused the government of minimizing the threat of the pandemic’s third wave for weeks, despite clear warnings from its own science advisers.

The government also came in for criticism from the Canadian Federation of Independent Business (CFIB).

“Evidence suggests that large, congregate workplaces are the source of COVID-19 spread — not small shops, salons, restaurants or gyms. Yet the government continues to shut down small businesses, some of which are still facing North America’s longest lockdowns,” CFIB president Dan Kelly said in an April 7 news release. “Yes, we face different challenges than we did a year ago, but we also have new tools and more information. It’s time for a new strategy that includes rapid testing, targeted vaccination for essential workers and capacity limits.”

On April 7, provincial health officials reported 3,215 new cases of COVID-19 and 17 virus-related deaths. The rolling, seven-day average of new infections now stands at 2,988, up from 2,316 one week ago. 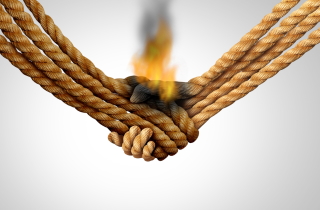