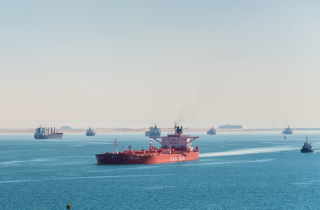 It’s time to take a closer look at the global issue of inhumane live export and transportation of animals for slaughter.

In March 2021, some 20 livestock boats containing thousands of animals were stuck in a watery bloated boat traffic jam for six days, imperilling animal lives. Many of the animals stuck in the Suez Canal blockage were sheep from Romania while other ships loaded live animals in Spain.

Gerit Weidinger, co-ordinator for Animals International, told the Guardian, “My greatest fear is that animals run out of food and water and they get stuck on the ships because they cannot be unloaded somewhere else for paperwork reasons. … Getting stuck on board means there is a risk [for the animals] of starvation, dehydration, injuries, waste buildup so they can’t lie down, and nor can the crew get rid of dead animal bodies in the [Suez] Canal.”

Problems with export, live transportation of animals en route to slaughter have been going on for a very long time and need to be globally phased out. How many suffering or dead animals is it going to take to look more seriously at live animal export, transportation en route to slaughter? Depending on the particular situation, there may be few, or inconsistently, applied laws.

We should take animal protection as the starting point for shaping applicable laws. Several thousand animals were already tragically slaughtered in Cartagena, Spain, earlier in 2021 due to issues with live animal sea transportation. Two ships were forced to spend months at sea, unable to dock because of documentation and animal health concerns involving a bovine illness “bluetongue.” The animals were in such a horrendous state that they had to be euthanized. The animals could not be sold in Spain due to import laws. The losers in this economic equation: animals.

Pleased to see that the U.K. is set to become the first European country to ban live animal exports. Other countries should follow suit toward legal reform, beginning with a thorough exam of the applicable animal welfare science.

In Canada, the Canadian Food Inspection Agency (CFIA) has considered issues relating to transportation, as have the courts.

In Sylvain v. Canada (Canadian Food Inspection Agency) [2004] F.C.J. No. 1093, the applicant sought mandamus requiring the CFIA to comply with cleanliness of poultry transportation crates as part of its statutory obligation. Case was dismissed with the court holding that the legislation imposed a duty on the owners of the crates, not the CFIA. The CFIA had discretionary power to ensure the enforcement of the legislation. The Sylvain case, filed over 16 years ago, was relied upon by the CFIA in a 2019 federal court horse transport case where the court rejected a challenge against the CFIA concerning welfare of live horses shipped overseas en route to slaughter. Canadian Horse Defense Coalition v. Canada (Canadian Food Inspection Agency) [2019] F.C.J. No. 1438. The judicial review was filed by a horse coalition over welfare concerns during live transportation export. The CFIA won its case.

The Federal Court declined to intervene, ruling that the CFIA could exercise its own discretion vis the Health of Animals Regulations (HAR) and that the coalition was unable to show how the CFIA failed to fulfil its legal obligation, stating:

44] The Coalition has not proven that a public legal duty to act exists, which is the first requirement for an order of mandamus to be issued. Subsection 141(8) and paragraph 142(a) of the HAR do not impose any obligation on the CFIA. The obligations imposed by these two provisions fall upon the owners and those in charge of the crates and containers used to transport horses. ... The Coalition has not shown how the CFIA failed to fulfill its legal obligation to act (Sylvain at para 29).

The court further stated that amendments to the law would make the case moot.

[49] I decline to make the declarations the Coalition seeks. They would serve no practical effect because the impugned provisions of the HAR will be repealed on February 20, 2020 and no longer in force.

The case is under appeal. Regardless of outcome, the case has helped to further the dialogue on the horse slaughter export pipeline.

Canadians have issues to tackle with live transportation of animals en route to slaughter internationally, but domestically as well.

Though the live horse export transportation case is concerned with horse welfare, wider issues of consumption of horses for meat, socioeconomics are also tightly bound up in the issues. Legislative reform may be helpful.

Having been around horses from a young age, I know that horses are highly skittish, ironically known as “flight animals” and it's easy to imagine that they would not fare well in crowded long-haul flights. Their welfare should be paramount.

There is currently petition E-3187 in the House of Commons sponsored by MP Nate Erskine-Smith to “stop air shipments of horses exported for human consumption, due to ongoing animal welfare concerns inherent in this practice.” (While not exactly the same, but related, are serious welfare issues with air shipments, importation of companion animals into Canada. Please see: Think twice before you adopt or buy a pet — animals are not commodities. In my view, animal regulation enforcement has become a major issue in animal law in the last decade and will continue to be prevalent.

We have discussed at length in animal law circles that there is an underlying commentary to be made about certain species of animals accessing justice, seeking to gain protections, whereas casting a wider net and call for legal protections could be made to help all species affected by live shipment to slaughter. Disasters and suffering by air, sea, or land, of live shipments of animals en route to slaughter occur too often and globally, thousands of animals like cows and sheep are also losing their lives every year.

Another conversation is about the consumption of certain types of animals for meat as being legal, but abhorrent (horse) while others (cow, sheep, chicken) may be deemed morally and legally OK, depending on the sociocultural and legal lens applied. Many may also not realize that Canadian horses are being shipped live overseas for consumption, that horsemeat is widely consumed in Europe and Asia but is also eaten here in Canada.

Live export of animals shipped off as consumable commodities is a loudly ticking animal welfare time bomb. There is a need to defuse the bomb by phasing out, then banning the practice globally for the sake of animal welfare. This is another area which will require the international legal community to work together. Animals are not expendable commodities that can be transported like tinned tomato soup.

The Suez Canal traffic jam is the most recent example demonstrating that live shipment of animals for slaughter is fundamentally hazardous. Sadly, the next inhumane live animal export transportation disaster is undoubtedly looming, if we continue with business as usual. The fundamental lesson for reform is simple: live transportation, inhumane export of animals en route to slaughter needs to be globally phased out.