Ontario Premier Doug Ford has committed to announcing a provincial paid sick days program within days, but offered no detail at an April 22 news conference broadcast from the backyard of a Toronto home where the premier was in isolation after a staff member contracted COVID-19.

Becoming emotional at one point, Ford apologized to the people of Ontario during his opening remarks, saying his government moved too quickly with stricter public health measures it announced April 16 aimed at reducing mobility. 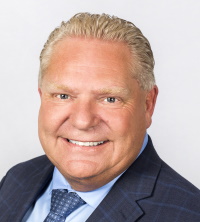 The government subsequently retreated on some of those measures, later confirming that children’s playgrounds would not be closed, as originally stated, and that police officers would only be permitted to randomly stop motorists or pedestrians if they suspected them of taking part in gatherings not permitted by public health restrictions. Several police forces, including those in Toronto and Waterloo Region, announced hours after the government announced the tougher measures April 16 that they would not conduct random stops.

After the province’s April 16 announcement, the head of the government’s science advisory table, Dr. Peter Jüni, later commented to news media that the advisory body had not specifically recommended the closure of outdoor recreational facilities or stronger police powers.

However, opposition critics, labour leaders and even the science advisory table have called on the government to implement a provincial program that would provide paid sick days to workers forced to isolate due to COVID-19.

At the April 22 news conference, Ford said the government had hoped that the federal budget announced April 19 would address gaps in Ottawa’s Canada Recovery Sickness Benefit, which Ford’s government has repeatedly pointed to when critics have called for a provincial program.

“Unfortunately, Monday’s federal budget didn’t include the important improvements to the Canada Recovery Sickness Benefit that we needed to see,” he said. “That’s why we are now working on our own solution to fill those gaps for everyone in Ontario.”

Ford said Ontario was the first province to pass legislation to protect workers who are forced to stay home due to COVID-19 from losing their jobs.

“But it isn’t enough to know you can’t lose your job,” he said. “You also need to know you won’t lose your income. And if you’re living paycheque to paycheque, you shouldn’t have to wait long for the support you need.”

In response to a reporter’s question, Ford did not specify when the provincial paid sick-day program will be announced.

At one point, Ford paused for several seconds to hold back tears as he described the difficulties of the pandemic.

“I know that these lockdowns, they’ve been devastating for people,” he said. I hear it every day, every single day. People telling me their stories, the stories that can make you cry.

“I want you to know that I hear you,” he added. “I understand what you’re going through. I understand your frustration.”

However, the premier received little sympathy from opposition parties and some Twitter users.

“Greens have been calling for paid sick days since Ford cancelled them in 2018 for a reason: Paid sick days help save lives,” Ontario Green Party Leader Mike Schreiner said in an April 22 news release. “The fact that it’s taken thousands of deaths and a raging crisis in Ontario for the premier to realize this is appalling.”

In an April 22 Tweet, Dr. Ritika Goel, a Toronto family physician and the faculty lead in social accountability at the University of Toronto’s Department of Family and Community Medicine, said, “Doug Ford’s announcement is NOT paid sick days.”

“Paid sick days come through legislation requiring employers to provide days where a worker can be off sick and get paid,” she added. “Ford is ‘working on’ sick pay, which is something you would have to apply for and wait for.”

On April 22, Ontario reported 3,682 new cases of COVID-19 and an additional 40 virus-related deaths. The province’s rolling, seven-day average of new cases dropped slightly to 4,176, down from 4,208 at the same point the previous week.

However, hospitalizations continued to grow, further fuelling fears that emergency room and ICU doctors will be forced to make difficult triage decisions involving COVID-19 patients. On April 21, the number of COVID-19 patients in intensive care units reached 806, comprising more than a third of all available ICU beds.