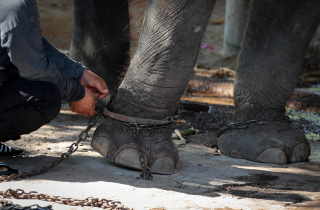 Thunderous animal law news out of the U.S. For the first time in history in an English-speaking jurisdiction, an animal is going to have her day in high court. That’s correct. A non-human being named Happy is going to have her elephantine habeas corpus case in court. The hugely influential New York Court of Appeals agreed on May 4, 2021, that they will hear Happy the zoo elephant’s habeas corpus case.

Happy the elephant has been stuck inside the Bronx Zoo since the 1970s.

There is no doubt that animals are valued by society and a shift is occurring to begin to recognize them as intrinsic beings. Nearly three years ago when I wrote about Happy in The Lawyer’s Daily, I wrote, “The voices decrying the notion that animal matters are a waste of court resources may gradually be fading into the background as courts hesitantly, nervously approach the idea of animal rights. I believe we will likely be seeing more cases like Happy’s where the court has to grapple with law, ethics, science and policy to try to account for the intrinsic worth of non-human animals. When I first started practising animal law nearly 20 years ago, strategic cases that questioned the fundamental legal position of sentient animals were rare. ... Animal law cases are raising elephantine issues about animals and society worldwide. It’s likely that the elephant in the courtroom will not be ignored for long.” (If you're wondering what animal law is, please check out this article Inside practice: Animal law.)

That day has arrived. This is a fundamental access to justice for animals issue, for animals to have their voices heard. There’s every reason to expect that Happy could be declared a person. Not a human being, but a person. To be a legal person, one need not be human. Rivers have been declared persons. Earlier in 2021 in Quebec, the Innu Council of Ekuanitshit has granted the Muteshekau-shipu River (Magpie River in English) legal personhood through resolutions by the Innu Council and the Minganie Regional County Municipality. New Zealand declared a river a person several years ago.

From things to persons

An elephant is not a thing meant for human entertainment. Happy is a living, sentient, highly intelligent, cognitively complex elephant who was the first animal to pass the mirror test, which means that she can recognize herself in a mirror and is self-aware. Elephants are highly social and Happy has been living without another of her own species for a long time. Happy is not well named.

This legal battle has been brewing for decades. “It has taken my last 36 years of work — including  including twenty-two law review articles and five books, and teaching in ten law schools, including Harvard and Stanford — and the magnificent work of the Nonhuman Rights Project over the last 25 years to develop our evaluate our powerful legal and factual arguments” (Steven Wise on LinkedIn). Leading the legal charge to free Happy from confinement is trailblazing lawyer-professor Steven Wise of the Non Human Rights Project (NhRP). The Nonhuman Rights Project is an American civil rights organization dedicated to securing rights for non-human animals. Wise and his team are counsel for Happy.

The pith of their argument is that Happy is suffering, she ought to have the same rights as a person and should be shifted to an elephant sanctuary. The media have written about this ramifications of this important case: “The 50-year-old elephant has been living alone at the zoo for years and attorneys say her ‘case will turn on whether an extraordinarily cognitively complex’ nonhuman animal has legally cognizable rights and protections under the ever-shifting New York common law.”  The New York Post reported, “Attorneys for the group have argued that the Asian pachyderm — who’s lived at the Bronx Zoo for over 40 years, and has been alone there for more than a decade — is a complex and intelligent creature who has the same right as humans do to live free of captivity.”

Wise and the NhRP have assembled a dream team of not just lawyers, but scientists and academics, including Jane Goodall and other experts. An affidavit was filed in the case by renowned elephant expert, Dr. Joyce Poole who stated: “Held in isolation elephants become bored, depressed, aggressive, catatonic and fail to thrive. Human caregivers are no substitute for the numerous, complex social relationships and the rich gestural and vocal communication exchanges that occur between free-living elephants.”

If this momentous case succeeds, Happy may be the first animal in the U.S.A. to have her right to bodily liberty recognized by a high court.

“History shows that rights expansion begins as an idea that may be thought of as almost unthinkable, deviant even, and then moves from impossible to possible” (Access to justice for animals: It’s possible).

The challenge will no doubt be met with skepticism and the zoo will argue that Happy is fine where she is, but one of the New York Court of Appeals justices, Eugene Fahey, has already made some extremely favourable and insightfully empathic comments toward animals in the past, stating that habeas corpus for non-human animals “will have to be addressed eventually.” Animals are not things.

In 2018 Justice Fahey importantly and prophetically noted: “The issue whether a nonhuman animal has a fundamental right to liberty protected by the writ of habeas corpus is profound and far-reaching. It speaks to our relationship with all the life around us. Ultimately, we will not be able to ignore it. While it may be arguable that a chimpanzee is not a ‘person,’ there is no doubt that it is not merely a thing” (Microsoft Word - Happy Petition KS 10.1.2018). The time has come for an elephant to have her day in a top U.S. court.

Chief Justice Catherine Fraser of Alberta’s words about Lucy the zoo elephant are similar. Chief Justice Fraser provided a framework for the unfolding of a new pathway for animals’ accessing justice in Canada’s in what has become a leading animal law dissent. In the chief justice’s powerful dissent in Reece v. Edmonton 2011 ABCA 238, an Alberta Court of Appeal case about Lucy the solo elephant in the Edmonton zoo, she wrote: “Lucy’s case raises serious issues not only about how society treats sentient animals — those capable of feeling pain and thereby suffering at human hands ... .” (para. 39). Cases involving animals deal with human obligations: “... stewardship is reflected in the legal obligations we have assumed not only to the physical biosphere but also to the animals with whom we share the Earth” (para. 58). For more on Lucy’s case, please see: Animal law: An elephantine case to consider.

Emerging legal landscape will include animals

Happy’s case is not just about animal rights, but about human responsibility, civility to animals. Both humans and animals stand to gain. “It’s therefore not only animals who stand to benefit, but society as whole, from a dissent like this that examines social justice issues while ostensibly considering the welfare of a large animal confined in a city run zoo” (Reframing the status of animals in Canadian law).

Conferring fundamental legal protections to animals enhances the lives of animals but of humans too. It’s a braver, newer world, where animals are included in the matrix.

(Editor's note: This story has been updated to clarify information regarding Happy’s whereabouts.)