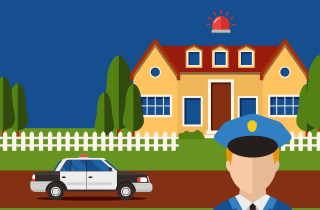 The Highway Traffic Act (HTA), as its name would imply, generally applies to things that happen on highways. Highway is defined in a very inclusive manner to include almost every imaginable path that “is intended for or used by the general public for the passage of vehicles and includes the area between the lateral property lines thereof.” This means that even the ditch or avenue beside the driven portion of the road forms part of the highway if it is owned as part of the property of the highway. The HTA can also apply to illegal actions which begin on a highway but travel off of it, such as an accident where a person crashes onto private property.

In the case of R. v. McColman 2021 ONCA 382, the Ontario Court of Appeal dealt with actions taken in and around a private driveway. In the case, the accused was seen driving down the road. Police decided to stop the vehicle but did not act on this until the driver was parked in his parents’ driveway. The driver had committed no breach of the statute before stopping and police did not take steps to initiate a stop until the vehicle had already pulled into the driveway. The driver showed fairly obvious signs of impairment after being detained, was arrested and eventually provided breath samples, the lower of which registered 110 milligrams of alcohol in 100 millilitres of blood.

The trial judge found no Charter breach but the summary appeal judge did. The Ontario Court of Appeal split 2-1 in its decision. The majority, Justices Michael Tulloch and Stanley Feldman, found that the stop and detention of the driver was a breach of his s. 9 Charter rights. The stop was not authorized by law. The HTA does not authorize random stops off the highway. The driveway was not part of a highway. The majority found that earlier appellate cases surrounding police stopping people in their driveway were distinguishable, notably because in those cases the police were following a person on to private property after the driver had already committed an offence under the HTA.

This case is likely to encourage police to make decisions, and act on them, before an individual leaves the roadway. Factual arguments about when police activated emergency equipment are likely to become more common as a result of this important differentiation. The majority found that “while the liberty interests at stake are qualified by the driving context, randomly detaining an individual on their own driveway is a non-trivial interference with liberty.” A specific concern noted was that the random stops which police wish to impose would typically not lead to charges and would leave no forum for detained individuals to challenge the legality of these stops.

Police bear the burden of justifying a stop on private property. If they do not, then the potential for abuse rears its head. In reviewing the Grant analysis, the majority found that the police action was brazen, though not in bad faith. It was a situation that “called for caution, not hubris” and the violation was serious and something the court should disassociate itself from (R. v. Grant  2009 SCC 32). On the second factor, the breach “significantly undermined the respondent’s protected interests.” On the third factor, the majority found that the court must encourage a “justice system that is beyond reproach.” The evidence was excluded.

In dissent, Justice William Hourigan found that the majority opinion encourages “sanctuary finding” as a way for impaired drivers to attempt to avoid prosecution. By pulling on to private property, an accused could get out of their vehicle and walk away to evade a RIDE program. Justice Hourigan suggests a purposive approach that where police form an intention to stop a motor vehicle while it is on a highway, that they can follow through with this intent even if they have not actioned the stop. Justice Hourigan also took issue with the majority’s views regarding police common law powers to stop and Grant analysis.

While an accused person has a right of appeal to the Supreme Court of Canada where the Ontario Court of Appeal splits on a question of law, the Crown does not have the same automatic option. Nonetheless, it is expected that the Crown will seek leave to clarify this area of law and it is highly likely that the highest court will take up the issue given arguable conflicts with the appellate courts of other provinces.