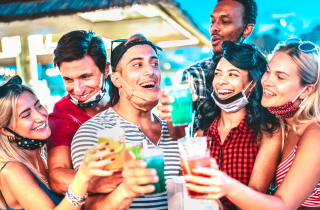 The hangover: Charging party hosts with COVID-19 manslaughter, part one

Can hosts of a party during the pandemic be charged with manslaughter? This question has increasingly been central to a powerful scholarly and legal debate across the country. The catalyst was the sentencing of Mohammad Movassaghi, in R. v. Movassaghi 2021 BCPC 112, who was charged with violating the British Columbia Public Health Order (PHO) for hosting a party for 78 people in a penthouse condo. During this time, provinces across Canada had issued similar public health orders that made illegal any non-essential indoor gatherings outside one’s own household.

Indeed, without vaccinations and sufficient protections, such gatherings heighten risks of COVID-19 transmission. In addition to unvaccinated attendees, the high transmissibility of COVID-19 has been seen to dramatically impact immunocompromised and elderly populations in irreversible and severe ways. What was unique to this case, however, was Justice Ellen Gordon’s admonishment to Movassaghi, one that highlighted not only the public health, but also the legal implications of public health violations. She notably stated that “If someone who had been at your party was infected and died, as far as I am concerned, you would be guilty of manslaughter.”

Manslaughter is defined under s. 234 of the Criminal Code as “culpable homicide that is not murder or infanticide.” This means that although an offender would be at fault for causing the death of another, they are not considered to have intended to cause death. The mens rea for manslaughter is whether the accused could have objectively foreseen bodily harm through their actions or omissions, and the actus reus for manslaughter rests on the link between those actions or omissions, and the resulting death (R v. Javanmardi 2019 SCC 54 at para. 44).

On its face, there are compelling reasons to consider breaches of a Public Health Order as potential preconditions to a manslaughter charge. The Supreme Court of Canada in Javanmardi offered a test to prove all the elements of manslaughter in a manner that includes the breach of public health orders. The court in Javanmardi maintained that the actus reus of manslaughter requires the proof of both the guilty act and mind for the unlawful act which contributed to death, which requires a consideration of predicate offences and causation.

The Crown is not required to prove that the predicate offence was objectively dangerous (Javanmardi at para. 44). The only requirement is that the predicate offence must be proven through the standard of criminal law. For a breach of the Public Health Order to be treated as a predicate offence leading to manslaughter, it can only be proven through the criminal law standard of mens rea — not the strict liability standard of fault which employs a rebuttable presumption of guilt, or an absolute liability offence which presumes guilt without a chance of rebuttal. This means that the Crown must prove beyond a reasonable doubt that the accused markedly departed from the standard of care expected of a reasonable person (Javanmardi at para. 65).

This does not seem difficult to imagine; due to the widespread awareness of the COVID-19 pandemic and its associated risks of transmission, as well as the widely promulgated nature of provincial PHOs, it is likely that the reasonable person would have known about the risks associated with hosting a penthouse party. The difficulty arises when the Crown is tasked with proving causation.

This is the first of a two-part series. Read the second article: The hangover: Charging party hosts with COVID-19 manslaughter, part two.