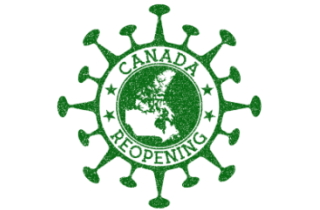 U.S. and Canadian citizens are finally receiving sure signs that the border may be reopened soon. After being closed for nearly 15 months, many believed the border between the nations would reopen on June 21. The countries’ leaders decided to extend the closure rather than reopen. Now, with the announcement of some Canadian restrictions being eased early this month, there is some indication that a reopening could come sooner rather than later.

Prime Minister Justin Trudeau has consistently stated that Canada would only reopen the border when it believes that it will be safe for Canadians. He has pointed to an 80 per cent vaccination rate as the threshold to meet for a reopening, along with a few other considerations. It was not until after the June extension that the prime minister clarified this number must reflect fully vaccinated individuals, and not those with at least one dose.

As of now, more than 80 per cent of Canadians have received at least one dose of the vaccine (for those age 12 and older), but less than 40 per cent are fully vaccinated. For the United States, these numbers are 55 per cent and 48 per cent, respectively.

Canadian officials have decided to ease a select few restrictions in the coming weeks despite this metric being below the target. Their reasoning is based on the significant drop in new cases and hospitalizations since the spring spike, as well as a promising vaccine rollout that may rapidly increase the fully vaccinated population.

The restrictions the Canadian government are easing will apply to fully vaccinated individuals who already cross the border for essential travel. Non-essential travel still will not be permitted. Some of the changes in this first phase include lifting quarantine restrictions for fully vaccinated individuals (they must still have a quarantine plan to show at the border); removing the hotel quarantine mandates; requiring all individuals to declare their vaccine status; and requiring original documentation of their vaccine. Although this first phase will not allow for an increase in travel, it is a clear sign in the right direction.

Additionally, many individuals believe the Canadian government is using this gradual process to prepare for a full reopening. It is still unclear what measures will be implemented for the full reopening, but this gradual system may help those working at the border identify problems and prepare for traveller processing on a larger scale.

Although Trudeau was clear that a reopening was not guaranteed because of the uncertainty that comes with COVID, there is clear progress towards reopening the border. With restrictions eased on July 5, the situation should continue to gain clarity. As the provinces of Canada continue to reopen, and Canada rolls out the second doses of its vaccine, the U.S.-Canadian border reopening appears to be looming closer.