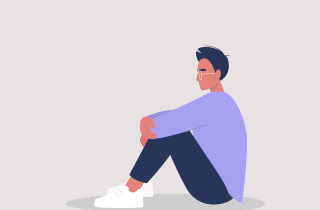 Charles Evans Hughes was the 11th chief justice of the United States and is widely considered one of the greatest lawyers and public servants in American history. After passing the New York bar exam in 1884 with the highest score ever awarded by the state, Hughes eventually went on to become the 36th governor of New York, 44th United States secretary of state and narrowly missed becoming president in 1916, losing to Woodrow Wilson. Judge Learned Hand, himself a revered figure, said that Hughes was the greatest lawyer he had ever known.

But what few Americans saw, or perhaps did not want to discuss, was that Hughes suffered from severe depression and anxiety. He received electroshock treatments for his condition and sometimes had to spend entire days in bed to recuperate from an especially stressful stint at the office. Hughes drove himself mercilessly. He had a reputation for being intense, serious, aloof and had little time for pleasantries.

This scenario will sound uncomfortably familiar to lawyers. As Ontario Chief Justice George Strathy acknowledged during his May 19, 2021, address at the Law Society of Ontario’s online Mental Health for Legal Professionals Summit, there is a strong correlation between the signs of mental illness and the traditional markers of success in the legal profession. Lawyers tend to be perfectionists and type A personalities driven by the need to achieve and to be seen to be achieving. This puts them at heightened risk for mental health issues and addiction.

It is very well documented that lawyers experience mental illness, substance abuse and addiction at a higher rate than the overall population. According to the New York State Bar Association, a recent survey of nearly 13,000 practising lawyers and judges found that 46 per cent had a problem with depression at some point during their careers.

Fortunately, the subject of mental health is no longer buried in the long grass. While discussing mental illness and substance abuse will never be easy, especially on a personal level, our profession is finally pulling back the curtain on these hitherto taboo topics to the point that those who need help hopefully feel more comfortable seeking it out. The stigma associated with mental illness and addiction is starting to erode. It is all right to be human and to be defined by something other than our professional achievements.

However, what is often overlooked in our discussions concerning mental health is its correlation with the issues of civility and professionalism. When a lawyer encounters a particularly hostile or discourteous opposing counsel or client, their instinct is to leap to judgment and assume that the lawyer or client is a malcontent or an egomaniac, especially if the lawyer has not previously interacted with them. How often do we really stop and ask ourselves: is this person all right? Might they be experiencing personal issues away from work? Are they burnt out? Are they overwhelmed? Based on the statistics I have cited above, there is a good chance that the ornery or unpleasant lawyer or client is experiencing mental health issues, whether they recognize it or not.

In a 2013 article titled Is it Incivility or Mental Illness? Understanding and Coping with Disruptive Student Behavior in the College Classroom, in The Journal of Effective Teaching, American professor and clinical psychologist Mary McNaughton-Cassill discusses how to extract indicators of mental illness from behavioural patterns. More specifically, signs of mental distress can include inappropriate emotional reactions, disclosing too much personal information, showing disregard for the rights and feelings of others, misinterpreting communications, poor impulse control, repeatedly missing deadlines, deterioration of work quality, absenteeism and unreachability. While the presence of these characteristics alone is not definitive evidence of mental illness or addiction, they can manifest in patterns that suggest something far more serious than a mere “character flaw” or an “off day.”

Of course, as lawyers we are neither qualified nor required to diagnose the mental condition of our colleagues and clients. What we are required to do is be civil. And, in my view, civility is, within this context, both an active and a passive verb: we must be civil in how we speak to, act towards and treat others, and we must be civil in how we receive and interpret the actions, emotions and circumstances of others. This includes pausing to consider what might be going on in the life of a difficult client or opposing counsel before branding them as “rude” or “unprofessional,” or worse. It could be the case that they are unpleasant by nature, but it could also be that something more sinister is going on. This is known as empathy.

Esteemed Canadian law professor and member of the Order of Canada, Ed Ratushny, promotes a similar philosophy, which he described as “seeing beyond our own workshop” in his address to the Call to the Bar Ceremonies at the National Arts Centre, Ottawa, Wednesday, July 16, 2006. As he explains, our legal training teaches us to avoid sentiment and be objective and even “hardnosed.” But “there is a danger that this clinical approach, combined with workplace pressures, may [negatively] affect our human relations in dealing with clients and others who enter our ‘workshop’ ”.

According to professor Ratushny a lawyer is judged on his or her human qualities more than anything else. Early in his career, professor Ratushny was appointed by the minister of justice of Canada as the first special adviser on judicial affairs. His responsibilities included recommending the names of lawyers for appointment to judicial vacancies in all of the superior courts, which required consultations with provincial attorneys general, chief justices and other lawyers. He explains that these consultations were seldom about a candidate’s legal brilliance; rather, the attorneys general, judges and leaders of the bar “inevitably assessed other lawyers on the basis of human qualities: fairness, common sense, diligence, honesty, decency.”

Finally, Ratushny reminds us that civility is not an abstraction. The human qualities to which he refers only emerge in the context of dealing with other people. They are “acquired incrementally over many years and over hundreds and even thousands of personal interactions,” and layer by layer, they ultimately form our reputation. “And your reputation will be the most important achievement of your legal career.”

Practising law is a hard job. The hours are long. The pressure to perform at a high level is relentless. It is hypercompetitive. The mood is predominantly adversarial. It leaves little room for family or personal time. For some of us, all of that can become too much to handle, and that is OK. It is incumbent upon all lawyers to be always mindful of this reality, and to be civil, compassionate and empathetic, particularly when confronted by the indicia of illness or addiction. Be kind, for everyone you meet is fighting a hard battle.