While dismissing an appeal in a dispute between a property owner, the township where she lived and a conservation authority, the Ontario Court of Appeal has highlighted the plight of self-represented litigants, noting that self-represented parties are “an increasing fact of life in Ontario courts, one which judges must accommodate.”

Justice Peter Lauwers, writing for the Court of Appeal, noted that the appellant, Vidhya Ramdas, was self-represented before the application judge in the case.

He emphasized that self-represented litigants “are ‘expected to familiarize themselves with the relevant legal practices and procedures pertaining to their case and respect the court process.’ ”

“First,” he wrote, “judges have a natural tendency to rely on counsel for a clear and accurate understanding of where things stand in the litigation.”

“But judges must also permit self-represented parties to explain how they understand the status quo. This will help avoid any impression of favouritism or bias,” he added.

Second, he noted, “self-represented individuals often do not fully understand the difference between evidence and submissions, even when it is well explained by the trial judge.”

“Such a party might inadvertently give evidence in the course of making submissions. This is not admissible evidence on which the judge can rely unless it is given under oath. One option for the judge would be to swear in the party and allow submissions to be made from the witness box, and to permit cross-examination on the evidentiary parts,” he wrote, noting that “[D]oing this would permit the judge to make findings on the evidence where appropriate.”

Justice Lauwers offered that “[T]his is a tool judges might wish to use in applications or in ordinary motions on a motions day (where such evidence is necessary and otherwise admissible).”

He noted that in the case at bar, the application judge, Justice M.J. Lucille Shaw of the Superior Court of Justice, “gave thought to proceeding that way but ultimately did not permit Ms. Ramdas to provide viva voce evidence.”

He also noted that it is “open to a judge to engage in active adjudication in order to obtain relevant evidence from a self-represented party who might not fully understand what is relevant and what is not.”

“That said,” he added, “the principle of impartiality constrains a judge’s obligation to help make the judicial process accessible to self-represented parties. A judge must not cross the line between assisting self-represented litigants in the presentation of their evidence and becoming their advocate.”

Third, Justice Lauwers turned to “the obligations of counsel who are opposing a self-represented party.”

“As officers of the court,” he wrote, “lawyers have a duty to assist both self-represented litigants and the court in order to ensure that justice is not only done but is seen to be done.”

“As I noted in Girao v. Cunningham, 2020 ONCA 260,” he added, “lawyers’ obligations towards self-represented litigants are fairly limited under the Law Society of Ontario’s Rules of Professional Conduct.”

“However,” he stressed, “there are also the more general duties lawyers have when acting as advocates, including the obligation to treat tribunals with candour, fairness, courtesy, and respect.”

Justice Lauwers explained that in “situations where opposing interests are not represented — for example in motions brought without notice or in uncontested matters — the Rules of Professional Conduct direct lawyers to take particular care to present their client’s case in a candid and comprehensive manner to ensure a tribunal is not misled.”

He noted that this “guidance should also apply where the presence of a self-represented litigant might impede the full proof and argument expected when both sides are represented.”

He explained that the “Code of Conduct is intended to supplement professional conduct rules and the Statement of Principles, and directs lawyers to:


“This is good advice, and counsel who are opposite self-represented litigants would benefit from the Code of Conduct’s guidance,” Justice Lauwers emphasized.

According to court documents, Ramdas’ basement “leaked water,” so she had a contractor repair the leak. However, the work was “started without a permit from the Township or from the Conservation Authority.”

The contractor, the court noted, “removed a significant amount of peat and replaced it with fill in an area that extended well beyond the footprint of the house.”

The court also noted that on July 11, 2018, a County of Dufferin bylaw enforcement officer “investigated a complaint about the property” and “delivered a stop work order and a remedial order to Ms. Ramdas on July 16, 2018.”

The order barred Ramdas from “continuing the work and required her to restore the land to its original condition.” The bylaw officer went to the property again on August 11, 2018, “in response to complaints about ongoing fill activities.”

The court noted that one of the contractors told the officer that “the County of Dufferin had issued a building permit to Ms. Ramdas to fix the foundation of her house,” but the permit “did not authorize excavation or filling activities beyond the foundation, which were the impugned actions.”

This led the Conservation Authority and the Township to bring applications for injunctions to stop Ramdas from continuing work on her property. Interim injunctions were granted on Aug. 27, 2018, and then, according to court documents, “proceedings were adjourned several times.” In June 2019, the court ordered that “no further adjournments would be granted without leave and required Ms. Ramdas to file responding materials by September 30, 2019.”

According to court documents, the “applications for permanent injunctions came before the application judge on November 12, 2019” and although the “appellant’s previous counsel served responding materials on October 30, 2018, they had not been filed nor was a factum served or filed by Ms. Ramdas.”

Justice Shaw “did not grant a further adjournment and the hearing proceeded without evidence” from Ramdas. She granted permanent injunctions, obliging Ramdas to “comply with the law.”

Ramdas appealed, arguing that Justice Shaw “improperly denied her request for an adjournment.”

On this ground of appeal, the court noted the “[B]ecause the interim injunction had been in place for more than a year, and Ms. Ramdas had complied with it, it was obvious that another adjournment would not cause prejudice. However, the application judge did not become aware of the interim injunction until after she had decided to refuse the adjournment, and she did not revisit the issue.”

Ramdas also argued that “it was inappropriate for the Conservation Authority and the Township to proceed by way of application because there were contested facts.”

According to court documents, these facts were “set out in the material that previous counsel for Ms. Ramdas had served on the Conservation Authority and the Township but had not filed.”

In his analysis, Justice Lauwers wrote that although Justice Shaw “acted on the basis that Ms. Ramdas had requested an adjournment, that request was not clear on the transcript.”

“Further, Ms. Ramdas did not tell the application judge what she would do with an adjournment if granted,” he added, noting that he saw no “basis for appellate intervention” with Justice Shaw’s adjournment refusal nor on the merits.

“The hearing was peremptory to Ms. Ramdas. The evidence on which the respondents rely is overwhelming. While there might be conflicts on points of credibility as to who said what to whom and when, there is no doubt that Ms. Ramdas proceeded with the excavations on her property without the requisite permits. Requiring the application to proceed anew, by way of either the trial of an issue or the application, would serve no purpose,” he wrote in dismissing the appeal.

In his observations on self-represented litigants, Justice Lauwers noted that “[I]n this case, counsel for the Conservation Authority and the Township were remiss in not alerting the application judge on a timely basis that interim injunctions were in place, with which Ms. Ramdas had complied.”

Justice Lauwers dismissed the appeal, with Justices Alison Harvison Young and Lorne Sossin in agreement, in a decision Nov. 17. The court declined to awards costs on the appeal due to the “foregoing concerns with the information provided to the application judge …”

Counsel for the appellant did not respond to request for comment before press time.

Counsel for the Grand River Conservation Authority and the Township of Amaranth declined to comment on the decision. 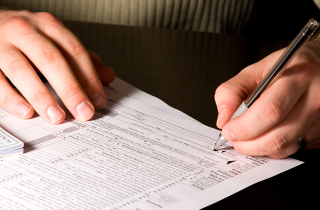