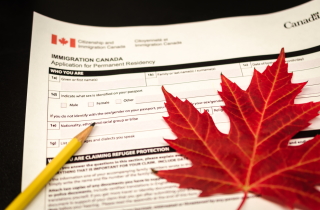 It would be difficult to overstate the magnitude of the impact that the COVID-19 pandemic has had globally on the movement of people from one country to another. The Organisation for Economic Co-operation and Development (OECD) reported in October 2021 that global migration to OECD countries fell to only 3.7 million permanent migrants in 2020, a drop of 33 per cent over the previous year, and the lowest level since 2003.

Despite experiencing a comparable drop in rates of immigration during 2020, Canada welcomed a record number of new permanent residents in 2021, surpassing its goal of 401,000. The largest proportion of Canada’s new permanent residents came from the ranks of those temporarily resident here, as bringing people into the country from abroad proved challenging while the pandemic raged. Throughout 2021, new variants of concern were discovered and restrictions on international mobility persisted as a transmission mitigation strategy.

It is a new year and Canada has a relatively new federal government. The country’s immigration targets have increased to 411,000. Canada has announced several new strategies and initiatives to modernize its immigration system and bring more people into the country from abroad.

Funding to digitize the system

There have been calls for reform to the outdated, paper-based system of processing and maintaining immigration applications in Canada. In her December 2021 economic update, Deputy Prime Minister and Minister of Finance Chrystia Freeland announced new federal funding directed toward a multiyear effort to digitize Canada’s immigration system:


Immigration is another important driver of economic growth and a Canadian competitive advantage. Our government is committed to bringing in 411,000 immigrants in 2022, the highest number in Canadian history. To help support this effort and reduce processing time for permanent and temporary resident and Canadian citizenship applications, we are investing $85 million in our immigration system.

The problems inherent in a paper-based system are clear. One example is the situation faced by spousal sponsorship applicants, who, under the current system, must call their member of Parliament, who must then call the minister of immigration, who in turn reaches out to a Ministry office to have an employee retrieve a paper file from a cabinet — all to simply obtain an update on the status of a file. While digitization of a system with a current backlog of over 1.8 million applications is expected to take some time, the federal government is optimistic about the positive impact this funding will have on the situation.

Already in 2022, the Express Entry program’s applicants have received 392 invitations to apply for permanent residence in Canada. All of this first draw’s applicants were candidates under the Provincial Nominee program, suggesting a close partnership between the federal and provincial governments in using the immigration system to address the unique labour market needs of each jurisdiction.

Changes anticipated to take effect to the National Occupational Categorization (NOC) system in the fall of 2022 may also impact applicants under Express Entry. The four-category skill level structure of the NOC will be replaced by a six-level categorization system which outlines the Training, Education, Experience and Responsibilities (TEER) associated with a particular occupation. In several categories under the new system, education and experience in a particular occupation are interchangeable, which should increase the pool of prospective applicants for entry.

With the largest proportion of newcomers to Canada choosing to settle in Ontario, the province has a unique role to play in ensuring that immigration has a positive impact both on the lives of new and long-time residents as well as the economy. Legislative and regulatory changes are anticipated in the new year to reduce barriers that new Ontarians face in entering into the regulated occupations in which they trained and worked prior to migrating to Canada.

The Working for Workers Act, 2021, passed in December, aims to substantially reduce the time and administrative steps for new Ontarians awaiting membership with their occupational regulatory bodies. The new legislation prohibits regulatory bodies from imposing “Canadian experience” requirements for membership on foreign-trained workers in these professions and will ensure that a lack of proficiency in both of Canada’s official languages does not serve as a barrier for newcomers whose skills and expertise are needed. These occupations are those identified in Schedule 1 to the Fair Access to Regulated Trades and Compulsory Professions Act:


Given the strain that the COVID-19 pandemic has already placed on an overburdened health-care system in Canada, these legislative changes provide for the possible addition of regulated health professions to the purview of the Working for Workers Act. The provincial minister of labour, training and skills development also retains discretion under the new legislation to support those trained abroad in gaining access to regulated professions in Ontario. The minister can assist foreign-trained professionals by providing information, conducting research and analyzing trends, sharing information, and setting aside provincial funding to facilitate entry into regulated occupations.

Immigration to the four Atlantic provinces in Canada has for years lagged behind the other provinces. The Atlantic Immigration Pilot Program, first introduced in 2017, has brought 100,000 newcomers to Canada’s East Coast over the past four years. Over 90 per cent of entrants under the pilot have remained resident in Newfoundland, New Brunswick, Nova Scotia or Prince Edward Island at least one year after arrival under the program. These workers continue to fill labour market needs and contribute to the economy of the region, prompting the federal government to declare the pilot a success and to make it permanent.

Immigration Minister Sean Fraser, who hails from the East Coast, has stated that “the Atlantic Immigration Pilot has made an incredible difference in communities across our region. It has brought us the resource we need most: more people. They’re skilled, they’re young, and they’re staying.” Premiers of the four Atlantic provinces are in agreement about the ways in which the program has benefited their provinces in terms of addressing population decline and an aging workforce. The now-permanent program will offer a minimum of 6,000 spaces and will complement the provincial nominee programs in each province.

Sharaf Sultan is the principal at Sultan Lawyers and focuses his practice on both workplace and immigration law. He can be reached at ssultan@sultanlawyers.com.