Public pushback by judges against ill-informed criticism from media or politicians is usually counterproductive, but courts can promote a “culture of respect” for judicial independence and the rule of law by reaching out “more widely” to their critics, advises Lord Robert Reed of Allermuir, the United Kingdom’s top judge.

The president of the U.K. Supreme Court, whose judges (as in Canada) sometimes experience unjustified personal attacks, suggested “the essential message” that the judiciary should convey to the general public — as well as to critics in government, legislatures, business, and the media — is that “the functioning of any democratic constitutional system requires a culture of respect for the idea that the final say on matters of law must be determined by an independent judiciary, whose ultimate judgment will be implemented. “

“That doesn’t mean that the government, Parliament or the wider public need always like the judiciary or like our decisions -- but it does require a respect for, and a belief in, the rule of law as something above political priorities,” Lord Reed told lawyers and judges in Ottawa June 28. 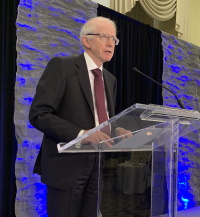 Quoting Lord Bingham, a former lord chief justice of England and Wales, Lord Reed explained “belief in the rule of law does not import unqualified admiration of the law, or the legal profession, or the courts, or the judges. It does, however, call on us to accept that we would very much rather live in a country which complies, or at least seeks to comply, with the rule of law.”

Reed said judges pushing back publicly against untrue or unfair attacks is not usually effective. “It seems to me that there is much good sense in the old adage that you should never wrestle with a pig: you both end up dirty, and the pig enjoys it,” he remarked. “So I don’t think there is normally much to be gained by responding directly in public, in a confrontational way, to attacks on the judiciary by the media or politicians.”

This is partly because judges are “not equipped for debate in that forum, not least because they have to preserve the dignity of their office, and their engaging in debate would demean their office and keep the story going.”

On the other hand, putting out an unobtrusive comment, which is not seeking confrontation, may have some effect. However, there are others who may be able to defend judicial independence more effectively, such as the lord chancellor in the U.K. (or the attorneys general in Canada), who has a statutory duty to uphold the rule of law and judicial independence. “In the U.K. there are also lawyers and retired judges, who are willing and able to respond to criticism of the judiciary, and may be able to do so more easily and effectively than the judges can themselves,” Lord Reed observed.

The judicial branch needs to consider other ways of responding to “uninformed” criticism, he advised. Notably, there can be “great value over the longer term” in promoting better understanding in politics, the media and elsewhere about the nature and value of judges’ work, i.e. “essentially trying to create a climate of opinion in which ill-informed criticism is less likely to be expressed, and less likely to gain traction, if it is expressed. That communication can also provide opportunities for rebutting attacks in a more discreet way, and tackling critics in private, where points can be made in a way which avoids the risk of anyone losing face in public and being, consequently, defensive.”

Lord Reed outlined a multipronged approach his court has taken, involving active outreach — both in public and behind-the-scenes — to the many and varied audiences for the court’s work. Hiring skilled communications staff with experience working in government or the legislature, is helpful. “They can give the senior judge on the court, in particular, the advice needed, and they also have useful contacts,” Lord Reed explained. “The judge needs to sit down with them and identify the bodies which have an interest in the courts and in the rule of law, even if they may not realize it. You then build or strengthen the court’s relationship with them.”

In the U.K., in addition to the general public, “critical” bodies include, among others, the government, Parliament, the opposition who may form the next government, the legal profession and “the city” — i.e. London’s major financial and legal services firms, he said.

“It’s not our role as judges to lobby or campaign on government policy, but we can properly seek to influence debates about the courts and our constitutional relationships by sharing relevant factual information, where appropriate, as I did in response to a recent call for evidence as part of a review of administrative law,” Lord Reed noted.

In addition to cultivating the judiciary’s key relationship with the lord chancellor, on whom it depends to uphold in its independence, the Supreme Court is planning discussions between its justices and the most senior officials in departments across government “to try to see things from each other’s perspectives, and to talk over the factors that can lead to governmental decisions and policies being successfully challenged in the courts,” Lord Reed said. “My aim is to develop trust and the sense that we have a shared responsibility for the rule of law, rather than being locked in a struggle for power.”

Lord Reed said his hope and experience is that if ministers and other senior government officials get to know better the judges and their work — and to value a relationship with the judiciary — “that may influence how they behave towards the court.”

Soon after he became president of the U.K. Supreme Court in 2020, Lord Reed reached out to the speakers of both houses of Parliament “to discuss how best to help their members to understand better the role of the court, to give them an opportunity to meet the judges, and to discuss with them how things look from each other’s perspective,” he said.

The apex court also invited members of the Justice Select Committee for an informal visit and discussion with its judges. “This was a very successful and well attended event, which went on for much longer than had been planned, which reflected the high degree of interest in our work,” Lord Reed said. “In May, I was invited by the lord speaker of the House of Lords, to give a lecture to parliamentarians from both houses, again, with the aim of promoting greater understanding of the rule of law and its interrelationship with democracy.  ... I’ve also addressed audiences in the City of London with a view to building a relationship where contact was previously rather limited. My principle aim in doing so is to make the city aware of the importance of the judiciary to the U.K.’s prosperity, and of the fact that it has a stake in the court’s work.”

Lord Reed said that, in his experience, “once you explain the link between the rule of law and the independence of the judiciary on the one hand, and economic prosperity and the success of industries, such as international legal services and financial services, on the other hand, they are receptive and supportive.”

“By means of strengthening relationships, and building trust with a wide range of institutions, I think it’s possible to change the prevailing weather, so to speak, to encourage trust where there may have been distrust; to encourage officials and politicians to see the courts and political institutions as having a shared responsibility for rule of law; and to help politicians and others to understand why the courts’ independent role is legitimate and necessary,” Lord Reed said.

His keynote speech addressed the question, “Who defends the judiciary when it is under attack?” at the June 27 to 29 symposium celebrating the (pandemic-delayed) 50th anniversary of Canada’s Federal Court and Federal Court of Appeal, which were born in 1971.

On that perennial subject Lord Reed cited, by way of example, the recent plight of some U.K. judges who ruled on a Brexit-related matter, only to find themselves personally attacked on a newspaper’s front page, with their photos plastered under the headline “enemies of the people.”

In Canada, personal attacks on judges remain a live issue, with a judge who presided over a case involving “Freedom Convoy” organizers telling Radio-Canada just this week that they were targeted by offensive messages, as well as threats that triggered police involvement.

Lord Reed emphasized the difference between attacks which accuse judges of deciding cases based on their own personal political beliefs, rather than based on their understanding of the law, and criticism that arises in the normal course of judges’ work. “Unjustified attacks … on the integrity of judges must be taken particularly seriously because they risk eroding public trust and confidence in the judiciary on which the rule of law depends,” Lord Reed warned, noting such attacks aren’t confined to exceptional situations, such as Brexit. “It’s liable to arise whenever a popular policy goes beyond what the law permits.”

The judge also slammed a “cynical” strategy employed on occasion in the U.K. (and not unknown in Canada) whereby a government adopts what it sees as a politically attractive policy — despite knowing full well that it is legally suspect — with officials advising politicians “to let the judges take any hit” and to blame any consequent policy changes as having been forced on government by the courts.

“A conscious strategy of letting the courts be attacked for applying the law, and then blaming the courts for thwarting government policy, is of course deplorable,” Lord Reed observed. “Behaviour of that kind demonstrates a lack of respect for the rule of law that encourages others to behave in an equally cynical way.”

He pointed out that such tactics hurt the judiciary’s morale: a 2020 survey of judicial attitudes in England and Wales revealed that just nine per cent of judges felt valued by the government.

Lord Reed acknowledged that criticism of court decisions is healthy, in principle, and is to be expected in a democracy. As well, compared to others in public life, judges “are generally treated relatively well by the media,” while enjoying relative anonymity in their private lives.

“We have to acknowledge that some criticism of the judiciary may be reasonable and may even be justified;” moreover, even unjustified criticism can assist courts to identify their “failures in communication,” Lord Reed said. “We should therefore be willing to listen to criticism and consider whether we might learn from it.”