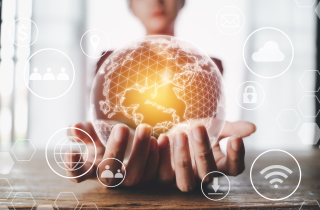 This is the second in a three-part series that examines the role the metaverse could play in the future of dispute resolution, with a focus on arbitration. In the previous article, Anthony Daimsis explained what led to the University of Ottawa becoming the first law faculty to run a moot in the metaverse. This article describes the pros and cons of running a hearing in the metaverse. In the third article, Barry Leon will comment on these observations and draw on his own experience in conducting virtual arbitrations to offer his perspective on how virtual reality technology may have a transformative role in dispute resolution, even if it is in its infancy.

Far more important than the differences between a virtual hearing room and a Zoom hearing is what virtual reality hearing rooms mean for access to justice and justice in general.

If you follow this link, you’ll see what the uOttawa/LeClair virtual reality courtroom looked like for the moot.

You may notice that the “student lawyers” are depicted as what are called “avatars.” An avatar is a virtual character, which a user can design to look like themself (although I’ve yet to see an overweight avatar, mine included!).

The technology is still in its infancy but works quite well. A person uploads a picture of themself and can tinker with height, weight, body shape, hair colour, hair style, eye colour, skin colour and so forth. You may then dress your avatar as you wish. As it turned out, everyone in the metaverse moot courtroom wore business suits. The judges were gowned.

From the perspective of conscious and unconscious bias, the implications of controlling how a client “looks” cannot be understated. Virtual reality achieves a deliberate homogeneity amongst parties, which is not possible to achieve in the real world.

Of course, such deliberate homogeneity has its downsides. For example, verifying that the avatar present in a virtual reality courtroom is the person named in court documents will be a hurdle we will need to overcome, especially for self-represented litigants. For individuals represented by lawyers, which happens most often in arbitration, it is less concerning as lawyers already owe an obligation to verify their clients’ identities.

One concern that arbitrators, judges and lawyers raised at the outset of Zoom proceedings was about the ability to assess a witness’s credibility on Zoom. As it turned out, for many, it was easier, or at least as easy, to assess a witness’s credibility given that a witness’s face was much closer or much easier to see on a screen than when the witness was several feet away, even though the entire witness examination and things going on around the witness could not be seen, and despite the witness often being in a more comfortable and familiar setting.

The ability to assess credibility in a virtual reality setting has its challenges. The technology used in virtual reality does not perfectly mimic a user’s body movements. A user can control hand and arm gestures, but an algorithm determines how often one blinks. It makes for a very realistic perception, but it is not an authentic or fully accurate one.

But perhaps this is not detrimental. Many studies suggest that visual cues, like too much eye blinking, not enough eye contact or a nervous demeanour, have little to do with credibility or truthfulness, despite what many arbitrators, judges and others believe.

On the topic of evidence, one domain where a virtual reality hearing room is superior to a Zoom hearing room relates to presenting documentary evidence. For example, a user must “share their screen” in Zoom. Even when executed perfectly (usually with the help of more technologically advanced assistance), it makes for a somewhat clunky procedure.

After our virtual reality moot, I took part in several interviews with different news outlets. A recurring question was how difficult was it to get used to the technology. The question was germane and pertinent for those contemplating using this technology. If the technology is too difficult to use, it won’t be used. And (forgive my indelicateness) many more seasoned arbitrators and judges will avoid the technology if it’s too complicated for them.

As it turns out, the technology is both easy and quite intuitive.

We were fortunate to attract three impressive judges of varying ages and technological proficiency for our virtual reality moot. One was a former Supreme Court justice, now an active international arbitrator, Ian Binnie, one was a sitting Ontario Court judge, Justice Jodie-Lynn Waddilove, and the third was an experienced lawyer for whom this technology was not all that new, Ron LeClair.

In the lead-up to the moot, we had a brief “tech” practice, and to my surprise, it took no longer than 10 minutes for all the judges to become comfortable with the technology.

Any lawyer who has argued before an arbitral tribunal or in court will quickly notice an important shortcoming of arguing in the metaverse — the inability to rely on notes.

I raised this with the members of the team that built our virtual reality hearing room. It is a known shortcoming of the technology but perhaps not fully appreciated by non-lawyers.

The current virtual reality technology requires a user to use a headset. The headset covers the user's eyes and effectively shuts out the user from the outside world. It seems this is necessary to create an immersive sensation. Unfortunately, to my surprise, the technology does not yet appear to allow users to transpose notes or bring books from the real world into the virtual reality world.

This is a significant drawback, especially for lawyers but even for arbitrators and judges. Although the technology includes a rudimentary virtual pad on which a user may place some information, it is not the same as having a pad and paper or a laptop on which to take notes or from which to read notes.

A related point is the inability to rely on notes from co-counsel and junior counsel. Zoom hearings have made support counsel an even more valuable asset than in in-person hearings. Unlike arguing in person, arguing from a desk using Zoom allows senior counsel to receive notes from their team (junior counsel, client representatives, experts) without opposing counsel or the decision-maker realizing it or being distracted by it.

When arguing in-person, counsel is more or less restricted to receiving help from co-counsel, who sit with them at the counsel table, and perhaps a client representative and/or expert who is sitting nearby.

And while there is no formal rule against co-counsel using technology to receive notes from counsel (or clients) who are not seated at the counsel table, it can become distracting rather quickly. Zoom has made these exchanges nearly seamless. In the current model, virtual reality does not permit this.

Thus, while I am confident that developers of this virtual reality technology will soon overcome at least some of these hurdles, until they do I am not convinced a virtual reality hearing room is ready for the needs of modern-day dispute resolution.

But once these technological shortcomings are overcome, virtual hearing rooms should transform the practice, especially in international arbitration.

One considerable expense, both money and time, is travelling to a hearing. In the context of international arbitration, these expenses are magnified. Indeed, even Canada’s highest court seemed concerned with the cost of travel when determining the conscionability of a dispute resolution clause between an Uber driver and Uber (see Uber Technologies Inc. v. Heller, 2020 SCC 16, paras. 94, 95).

Once virtual reality technology catches up to most (if not all) hearing needs, then there becomes less reason to travel. The predominant view in international arbitration now is that using Zoom for certain steps in the proceeding, particularly case management conferences, is more than adequate.

On balance, however, many arbitration participants consider that hearings, and certainly cross-examination of witnesses, should occur in-person because the difference between Zoom and in-person hearings is palpable and often because of time zone differences.

However, many participants accept virtual participation for witnesses with short or less controversial evidence, for witnesses who cannot travel, for smaller cases that cannot justify the cost of travel, and so forth.

Eventually, virtual reality hearings will not suffer from these palpable differences.

The authors invite readers to submit comments and questions to anthony.daimsis@uottawa.ca, which they will address in a subsequent article.

The Honourable Barry Leon is an independent arbitrator and mediator with Arbitration Place, 33 Bedford Row Chambers (London) and Caribbean Arbitrators. He was presiding judge of BVI’s Commercial Court (2015-2018) and is a former chair of ICC Canada’s Arbitration Committee. Anthony Daimsis, FCIArb has over 20 years of experience in arbitration, sales law and contract law. He is a fellow of the Chartered Institute of Arbitrators and professor of law at the University of Ottawa’s Common Law section. He is a member of Littleton Chambers’ (London, UK) International Arbitration Group.