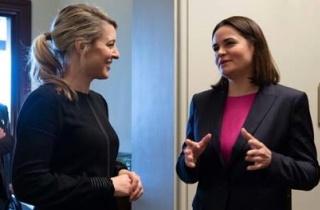 Canada has announced more sanctions against Belarussian companies and individuals that the federal government says are linked to Russia’s illegal war against Ukraine.

An additional 22 senior Belarusian officials in the military, border agency and political and civil administration are also targeted by the asset freezes/dealings bans and other sanctions, including individuals “complicit in the stationing and transport of Russian military personnel and equipment involved in the invasion of Ukraine.” 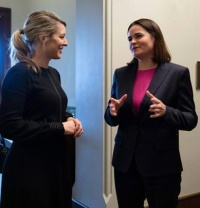 Speaking to reporters on Parliament Hill Nov. 22 during the visit to Ottawa of Sviatlana Tsikhanouskaya, the exiled opposition leader of the Republic of Belarus which is currently headed by President Alexander Lukashenko, Foreign Affairs Minister Mélanie Joly said Canada’s objective is to put “maximum pressure” on the sanctioned individuals and companies.

“On the one hand to create multiple points of pressure on the regime, economic pressure, and political pressure,” she explained.  “But on the other hand, we need to give energy to people, not let people to be exhausted, not to let people be forgotten. So that’s why we are asking for more assistance to our civil society, to our media, to our human rights [defender] programs, to revive our cultural and national identity in Belarus.”

Tsikhanouskaya expressed thanks for the latest sanctions, noting Canada has been standing up for a free and democratic Belarus for “many, many years.”

“Your support gives us hope and energy to move forward,” she said.

“By letting its territory serve as a launching pad for Russia’s egregious attacks against Ukraine, the Belarusian leadership is enabling the Russian regime’s human rights violations in places such as Bucha, Izium and Mariupol, and for contributing to the pain and suffering of millions around the globe that has resulted from President Putin’s weaponization of food and energy,” the federal government said.

It called Lukashenko’s “complete disregard for human rights, both domestically and abroad ... unjustifiable” and demanded his regime “cease being an instrument of the Russian regime.”

“Speaking truth to power is not always easy ­— but it is necessary,” Joly said in a statement. “Canadians take inspiration from human rights defenders and leaders like Sviatlana Tsikhanouskaya, who have the courage to speak up for what is right. Her actions, as well as those of Ukrainians, serve as a reminder that we must work together to create the world we want to live in. Those who enable human rights abuses cannot be allowed to walk on the UN Charter, and Canada will always call out those who do.”