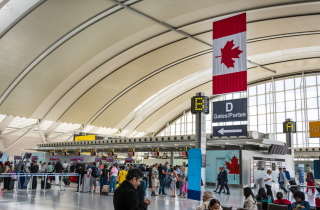 In September 2022, a consumer data analytics firm J.D. Power published an annual report for their North America Airport Satisfaction Study that tested airports in Canada and the United States. Amongst all the airports in Canada, Toronto Pearson International Airport is the only one that was considered a “mega airport.” The airport was ranked the fifth worst for customer satisfaction. This ranking was based on several factors listed in order of importance: terminal facilities, airport arrivals and departures, baggage claim, security checks, baggage check-in, and food, beverage and retail space.

Not only is the airport expensive for passengers, but it is also among the most expensive in the world for airlines to land. According to WestJet CEO Alexis von Hoensbroech, while many of the fees associated with landing a plane in Canada are of a similar kind to those charged elsewhere in the world, the amount is far higher than at other major airports. The fees are passed on to passengers and include gate and apron use, security checks, navigation services, landing charges, taxes and airport improvement.

Airlines also face hefty aeronautical fees when landing in Canadian airports, including landing, usage of gates and terminals, baggage facilities, air navigation, U.S. customs preclearance, apron charges and fuel taxes. In addition to all the fees that passengers and airlines are burdened with, the government of Canada has allowed Toronto Pearson Airport to increase fees to passengers and airlines as of Jan 1, 2023. The Airport Improvement Fee passed on to passengers, has now increased from $30 to $35 per departing passenger, and from $6 to $7 per connecting passenger. Aeronautical fees for commercial and business aircraft have been raised by four per cent.

The lifting of COVID restrictions caused a sudden influx of travellers in and out of Canada as well. The airport and the airlines were ill-prepared for the increased passenger load, and the tidal wave of arrivals overwhelmed the Canada Border Services Agency (CBSA). To make matters worse, a winter storm before the holiday season disrupted the airport further, as luggage-loading equipment froze and malfunctioned, resulting in passengers arriving without their bags and luggage piling up. Many passengers were heard yelling expletives after hours of waiting for their belongings. Videos on social media showed crowds waiting for hours to get answers about flight delays and cancellations. Travellers were left stranded with little or no recourse.

After receiving a failing grade in the J.D. Power report and countless traveller complaints, the airport launched the YYZ Express program on Nov. 3, 2022, which allows outbound travellers to book their spot for security screening up to 72 hours before departure. However, the program lacks coverage outside the specified business hours.

Arriving passengers can still use the much-maligned ArriveCAN app. Launched in 2020, this app was a mandatory program for travellers to declare their vaccination status and arrival details. Advocates and civil liberties organizations voiced serious privacy concerns about the data collected by the authorities through the app. Though the government of Canada has disabled the function to access users’ location, there is very little to prevent them from enabling it again. Further, the lack of transparency regarding the selection process of contractors used to create the app as well as a high level of redactions in published invoices raise significant concerns regarding security and transparency.

In July 2022, the problematic app was reported to have erroneously directed travellers to quarantine. CBC reported that the CBSA identified a technical glitch in the app. The CBSA issued a press release advising travellers to rely on instructions given at the Port of Entry if they conflicted with the app’s notifications. CBSA allowed a one-time exemption for fully vaccinated passengers during the time it took to resolve the technical glitch before succumbing to public pressure and making the app optional in October 2022. ArriveCAN still allows travellers entering Canada to complete their Advance CBSA Declaration up to 72 hours before their arrival. Despite its availability, it is not surprising that reports show that only 13 per cent of travellers used the app after it became optional.

In its Dec. 23, 2022, press release, the airport notes that it has taken several steps to reduce delays and stress on travellers. These measures include communicating with airlines regarding runway capacity, using airport de-icing facilities, and proactively treating runway surfaces in the event of snowfall or icy conditions. The airport claims that it continues to “maintain its focus on staff retention and recruitment” to keep up with the influx of travellers.

The airlines are partially to blame for the lack of quality service. According to widely disseminated media reports, Sunwing left passengers stranded during the holiday season. Air Canada and WestJet faced similar accusations and issued a joint apology with Sunwing for a “failure in execution.” Despite the apology, the ineffective service by Sunwing led to the launching of a class action lawsuit against the airline. The lawsuit seeks compensation for passengers who had a flight cancellation or delay of more than nine hours between specified dates.

The first restriction-free holiday season did not go well for Toronto Pearson International Airport. The lack of communication between airline staff and travellers created confusion and exacerbated passenger frustration. Although the airport is attempting to improve its services, much work remains to be done to bring it to a level of service that matches the exorbitant fees it charges to airlines and passengers, and to move travellers more effectively through its facilities.