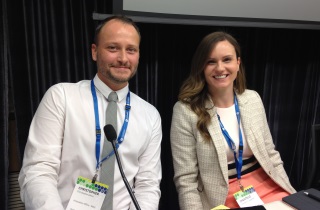 Progress is being made to modernize Ontario’s court system, even if that progress seems to be happening at a less-than-rapid pace.

Christopher Johns, executive director at the Ministry of the Attorney General’s innovation office, was a presenter at the Ontario Bar Association’s Institute 2018 civil litigation track, where he sat on a panel with Justice David Brown from the Court of Appeal for Ontario and Chantelle Spagnola, a lawyer with the litigation group at Davies Ward Phillips & Vineberg LLP.

The trio were assigned the topic of “Moving toward a paperless world” in the civil litigation stream that carried the overall theme of “Keeping up with the times: How to survive and thrive in the age of digital litigation” at the Feb. 6-10 event held in Toronto and Thunder Bay, Ont.

For his part, Johns took the opportunity to tell the audience what the province was doing to update the information technology in Ontario’s court system. He also explained the reason why updating the technology seems to be taking such a long time.

“There are three big reasons. One is making sure we handle the integrations the right way and making sure we get the best bang for our buck out of this. Part of the reason is it’s government, there are fiscal cycles we are married to and there are funding envelopes we have to live within and there is finite capacity. But the biggest reason ... is just the enormous amount of change management, the people we have to work with and the wild variation in processes that exist in our courthouses today.”

However, none of those limitations is stopping the updating, said Johns, adding that everything the province is doing is based on a 2014 evaluation and examination of the technology situation of the province’s courts and tribunals.

As a result of that, three distinct visions are being addressed.

In the civil and family courts, he explained the motivation was to provide technology that would enhance the self-service aspect because self-represented litigants are beginning to outnumber those represented by counsel, and as such their needs must be met, and they must be offered assistance navigating the system. Additionally, self-service will benefit both court administrators and lawyers.

With metropolitan courthouses seeing as high as 80 per cent of people coming into family courts as self-represented, Johns said the Ministry is building a tool to walk people through the process of filing while explaining the justice system to them, including presenting relevant information about common matters such as divorcing or adjusting support payments.

The province is also creating a separate path for lawyers who don’t need the same kind of hand-holding. It will allow for direct document uploading and fee payment. In terms of a schedule, joint divorces will be online as of late April.

In civil courts, civil filing is already running, but coming up in late May is the ability to file defence documents. Johns said the one thing the Ministry has already done was add the ability to create an account profile that will grab some basic identifying information, populate that automatically and create a transaction history.

Technology for the tribunals will also focus on self-service, but Johns said the first step was to pare down the amount of disparate systems and technology that the various tribunals have adopted over the years before moving forward with offering new applications and offerings.

On the criminal side, the Ministry wants to focus on smart information exchanges and connections between systems run by the attorney general, police departments and corrections, with the goal of reducing the amount of paper flowing between these organizations and increasing the amount of shared data.

Video is also being introduced so defence counsel can connect to clients who are in custody. Currently that capability exists in the Southwest Detention Centre, the Monteith Correctional Complex and the Ottawa-Carleton Detention Centre. It will soon be rolled out to the Toronto South Detention Centre. The charge or intake process is also being digitized, eliminating the need to transfer paper between the police and the justice of the peace to court staff.

Overall, he explained the slow nature of technological improvement.

“Because we are dealing with disparate systems and very fractured processes across these different types of court events, it’s hard to make change. That’s why we’re taking a very incremental approach to what we are doing. It’s the only way to ensure things land smoothly,” said Johns.

For example, he explained the Ministry has introduced the ability to initiate only civil actions online because there are dozens of business processes and rules associated with starting an action that need to be automated across over 160 courthouses and over 3,000 front-line staff who handle the actions.

He said the focus for any changes or new capabilities is digital first and mobile friendly and that digital becomes the primary channel and the channel of choice for interacting with the courts.

“We want to make sure that what we offer is consistent and streamlined, so online filing across all practice areas will be made consistent. It will look and feel the same, it will flow the same way, so whether you are filing in civil court today, family court tomorrow, you’ll be used to that experience and you’ll have that online profile to hold all of your transactions together.

“We do a lot of extra work to make as much integration possible as we can, with respect to the rules of court procedure and some of the administrative rules we have around filing.”