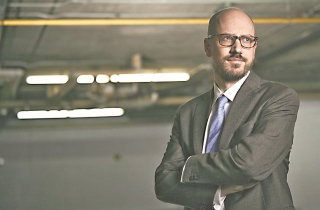 This is how a number of criminal defence lawyers from around the country are referring to the Dräger DrugTest 5000, recently approved by the federal government as a device to be used by police in the testing of drivers for impairment from marijuana.

Defence counsel who spoke with The Lawyer’s Daily said the use of the Dräger will most certainly lead to constitutional challenges due to what they allege to be the machine’s unreliability.

This is the latest pothole in the Canadian government’s bumpy road to marijuana legalization, scheduled to take place Oct. 17.

Ever since Justice Canada announced on Aug. 27 it had approved the Dräger DrugTest 5000, lawyers have been pointing to findings of false positives and false negatives produced by the device, as well as its performance in cold temperatures.

Ottawa lawyer Michael Spratt, a partner with Abergel Goldstein & Partners, pointed to a widely circulated study out of Norway, which found the Dräger to have produced a false positive for cannabis 15 per cent of the time. This, he said, could mean the unlawful detainment of people who actually have in their systems no THC — the ingredient that produces a high.

“Apart from the expense of the machine, apart from the legitimate questions about if the machine will be operational in Canadian [weather] conditions … the shocking thing is the error rate, and a 15 per cent false positive rate means that 15 times out of every 100 attempts, people who have zero THC in their body … can be subject to a pretty massive intrusion by police … [including] their arrest and detention, impounding their vehicle, taking them to a police station,” said Spratt.

This also would impact the cases of those who actually may be guilty of impaired driving, he said.

“What should concern the government is, if they get it wrong … this means that innocent people who have done nothing wrong will face all of those consequences I’ve described and will also be meeting the government in civil court and suing for civil damages for this type of mistreatment,” said Spratt. “The irony is that the individuals who challenge the constitutionality of this … in criminal court will be people who actually test above the legal limits of THC. Those are the people who’ll be able to challenge the matter in criminal courts … [and] will have standing to bring constitutional action against the use of this machine, and it’s those people who will have their charges thrown out.”

Toronto lawyer Calvin Barry, of Calvin Barry Professional Corporation, talked of the possibility of false negatives, which the Norway study found to be at rate of 13 per cent.

“You get a false negative and the person is impaired by THC … and goes away and kills three people. How about that civil suit against the police?” said Barry, who feels there will not be adequate time to train officers in using the device.

Vancouver lawyer Kyla Lee of the Acumen Law Corporation has said she is ready to file legal challenges when police start using the device. She questions “the functionality of the device in cold temperatures.

Lee also said that with cannabis, it “takes 10 minutes … just to get a result on the device.”

“It’s a significant amount of time from the perspective of somebody who has been detained by the police, who has not been given legal advice, who is standing there, staring at this machine and waiting for a result,” she said.

Winnipeg lawyer Zilla Jones echoed “concerns with the temperatures at which the device functions best and the possibility of false positives.”

“I also have concerns that I do not believe that we have determined an objective standard of impairment by marijuana in the same way that we have for alcohol,” said Jones in an e-mail. “This will vary depending on frequency of use and how individuals are affected and requires further study before we start criminalizing people.”

A spokesperson with Dräger Canada said the Norway study “has no applicable comparison to Canada.”

“It’s important to understand that when the study refers to ‘false positives,’ it does not mean that the person had no substances in their system when the road test was provided,” said Einat Velichover, business development manager for Dräger Safety Canada Ltd., in an e-mail. “It means that they no longer had enough drugs in their system when the blood test was conducted to be considered positive.”

Velichover went on to say that nanogram testing levels are different in Norway, as is the amount of time allowable between a roadside test and a blood test.

As for the machine’s sensitivity to climate, Velichover said that it “has internal temperature control functionality with heating and cooling capabilities to ensure a reliable read and quick confirmation in a broad range of conditions.”

“The device stays in the police vehicle, and is protected from the elements. It has been used successfully and accurately in many cold weather regions including in Poland and Russia for several years.”

But defence lawyer Spratt said it comes down to not knowing enough about the device.

“There hasn’t been any proactive committee work or study or evidentiary hearings on this,” he said. “The government is saying, ‘Trust us,’ and in the face of this information, that trust should be earned, and it hasn’t been.”